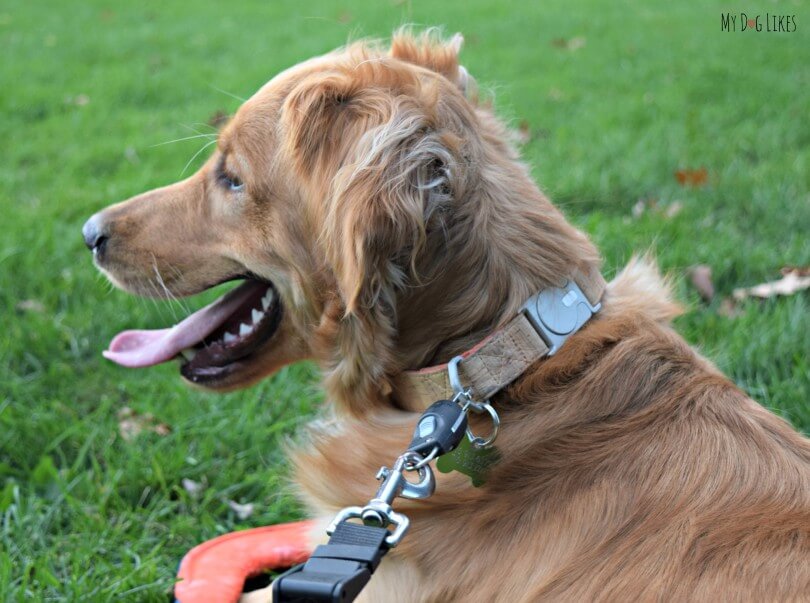 The leash clasp – you’ve seen it before….You may even have seen one that looks like this!! 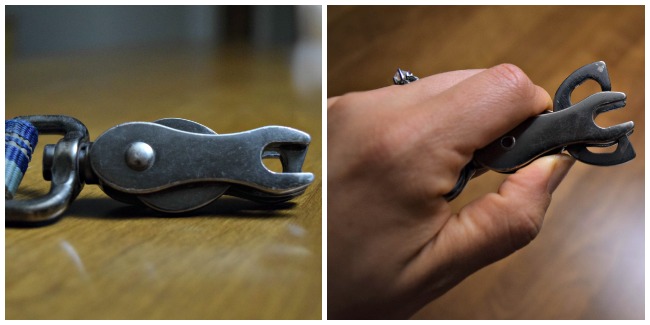 The leash clasp is something many of us consider to be tried and true. We have come to rely on its consistency; keeping our best fur-iends safe at the end of a 6ft leash.

So you may be wondering, how could a great product like that be improved? If you read our post last week which showcased the ALU Collar, a totally new take on another pet-parent staple, you might be picking up on a theme of late: AWESOME, INNOVATIVE products (that get us really excited).

Take your seats, the show is about to START!

You are about to see some Houdini-like stuff!

We first got to know the Magic Latch while at Backer’s Total Pet Expo! Without a doubt it was one of our favorite products and definitely one that we were excited to share with you! 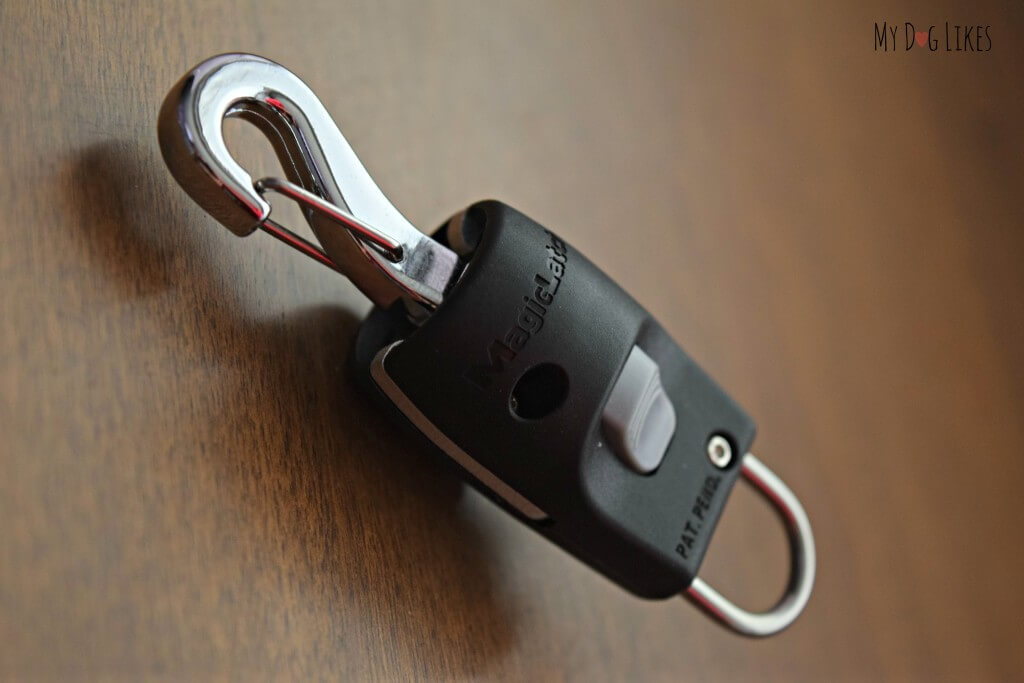 The MagicLatch consists of 2 pieces which integrate seamlessly with your dogs existing leash and collar.  These pieces are designed to securely latch together while simply being held close to one another.  Gone are the days of fumbling around trying to latch the standard lobster claw connection onto a moving dog! 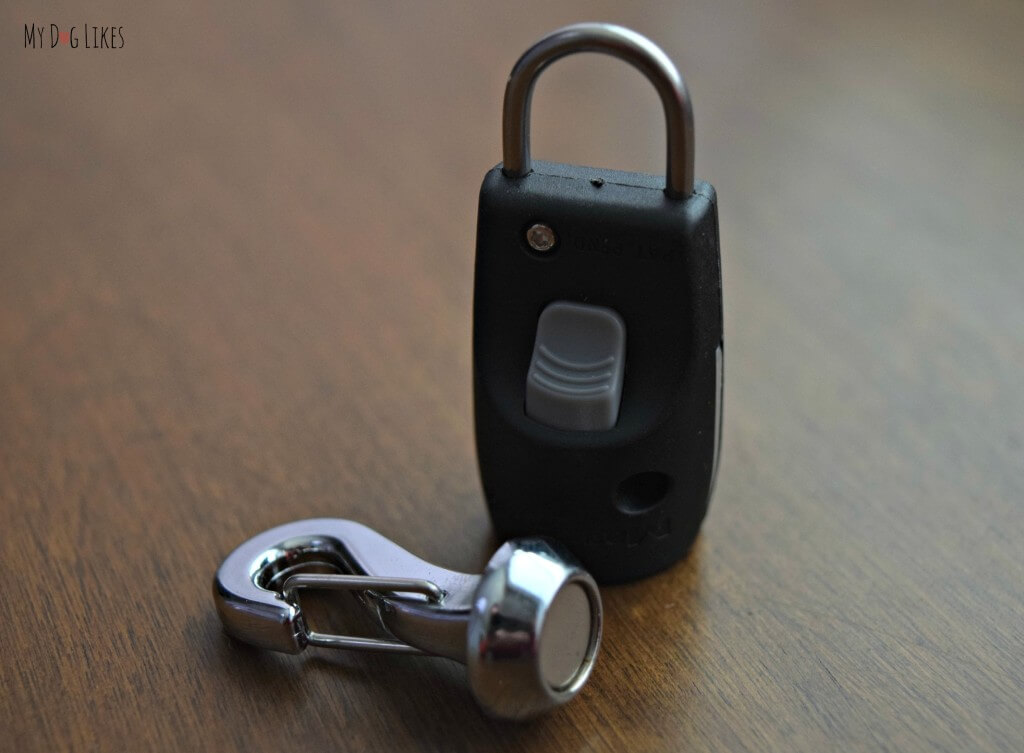 First, attach the dangle onto your dog’s collar. 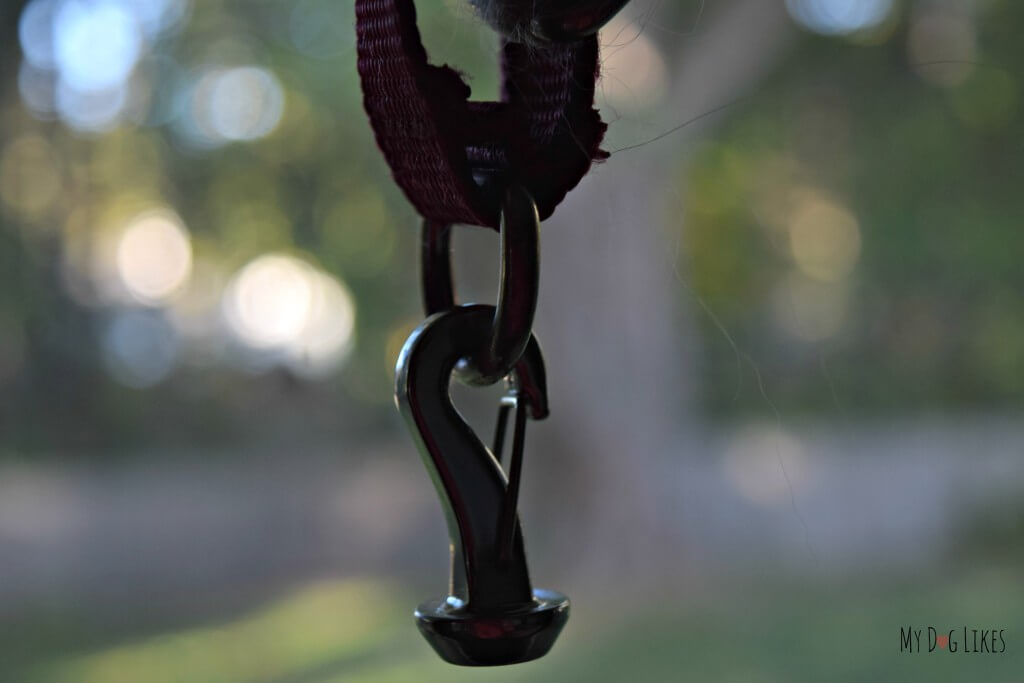 Next, attach the “Grabber” onto your dogs leash. 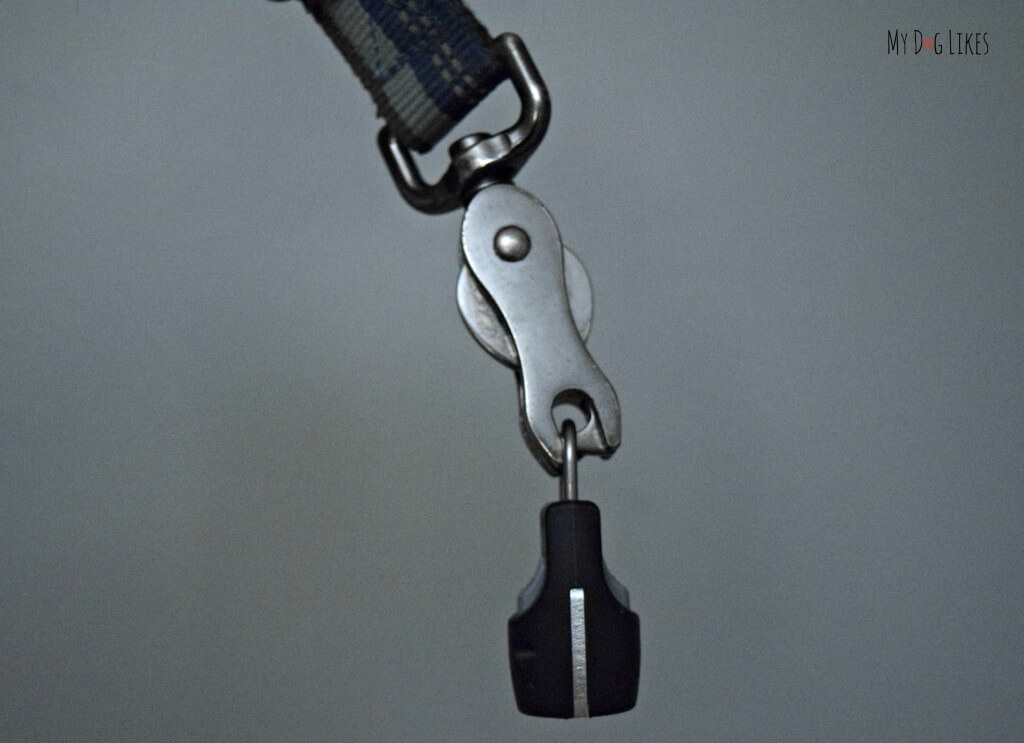 And thats it!  The MagicLatch is ready to go!

It is important to note that the Magic Latch is not held together magnetically.  The magnet simply guides the two pieces into place and is strong enough to push past the locking mechanism. Once snapped in, the Magic Latch cannot be pulled apart.  Instead, one or both of the sides must be pressed in to release the connection. Pull the two ends and you will be shocked, the connection is VERY secure! 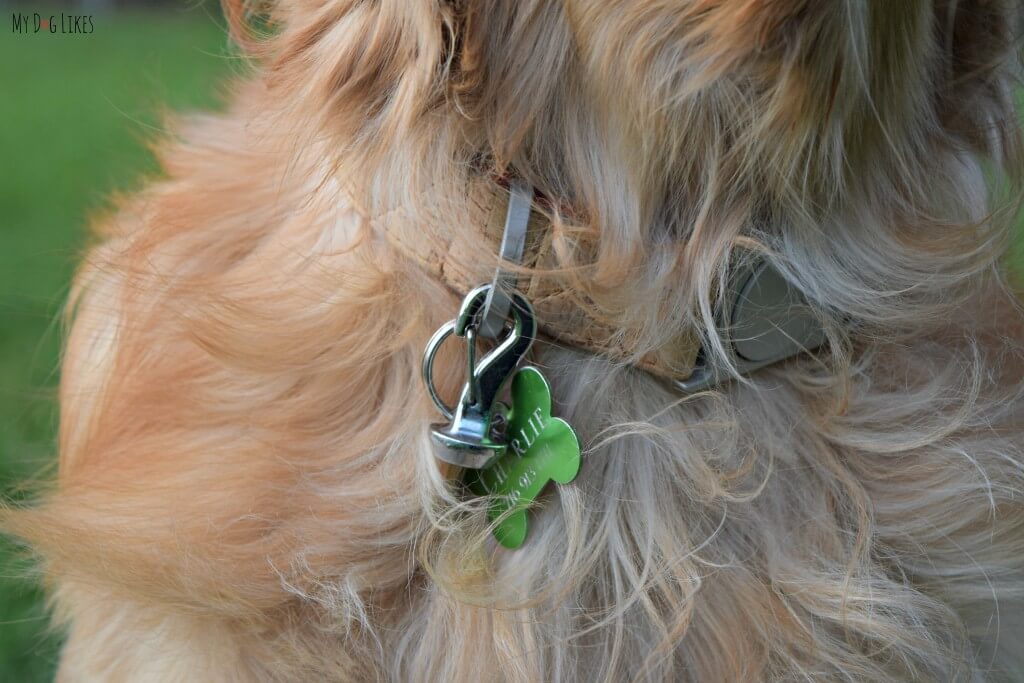 And For the Final Act: Our Magic Latch Review

We chose to have Charlie be the primary reviewer for the Magic Latch. Charlie is a serious wiggle worm who doesn’t hold still for long. Though Charlie’s pulling is significantly improving on the flat collar, we occasionally still use a no-pull harness which connects on his chest. Regardless of which device we use on his nightly walk, at times, it is almost impossible to see behind the mounds of golden fur and sometimes uncooperative body that obscures the latch. 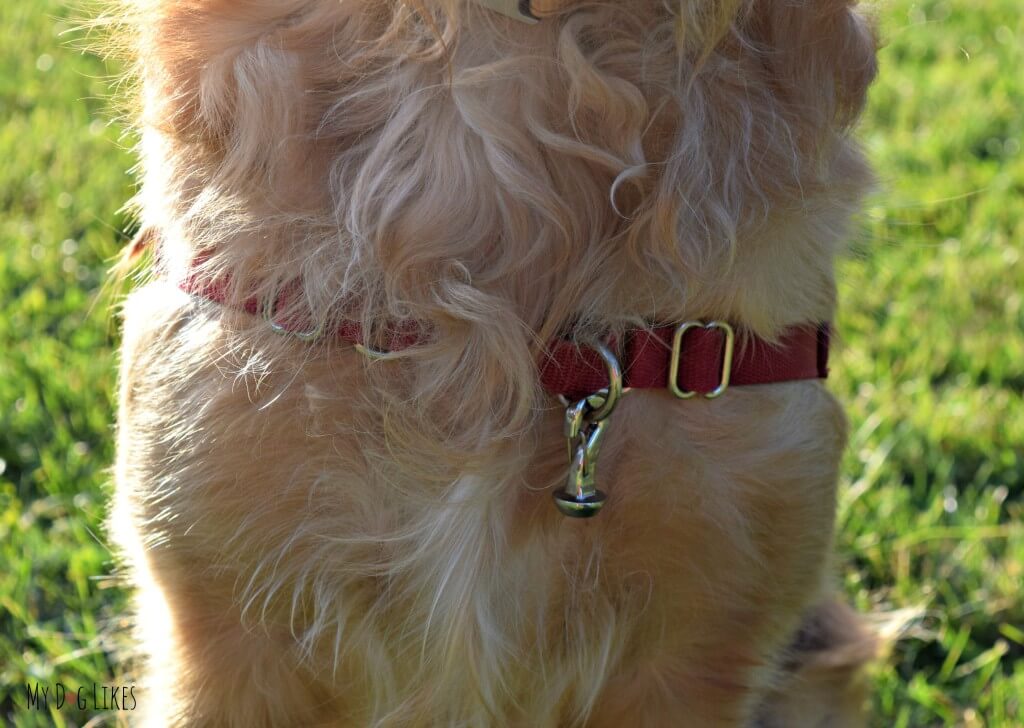 With all these luxurious locks and a tiny squirrel body, we loved the idea of being able to blindly reach around and have the Magic Latch safely secure this boy in a flash! (Please read section below on use with a chest harness)

Before leaving on his nightly walk, we attached the leash clasp (dangle) to the D-Ring of his collar, leaving the magnetic connection exposed. Though the Magic Latch came with extra D-Rings, they weren’t necessary for Charlie’s collar and it easily connected. Later on we attempted to connect the Magic Latch dangle to Harley’s size Large collar and the D-ring was too thick (see below) for the Magic Latch to close over it. 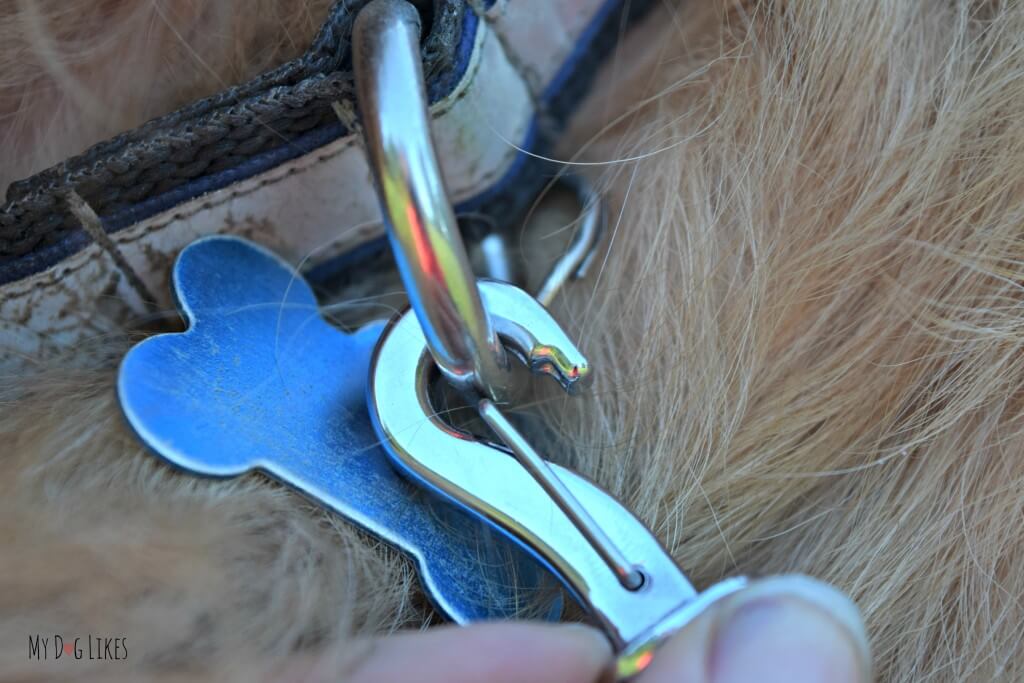 No worries, that is why Magic Latch includes a couple of D-Rings right in the package!

After getting the dangle secured, we attached the grabber base to his leash.

The Encore: Easy Peasy you say?!

Yes!! The next step was simply to attach the dangle and base to one another. At Backer we were able to play with the Magic Latch and were amazed at how easy it was to use but we couldn’t help but wonder if it would be as easy to do in real life, with an active and enthusiastic pup wiggling around. Also, would it be strong enough to hold up to puppy pulling? 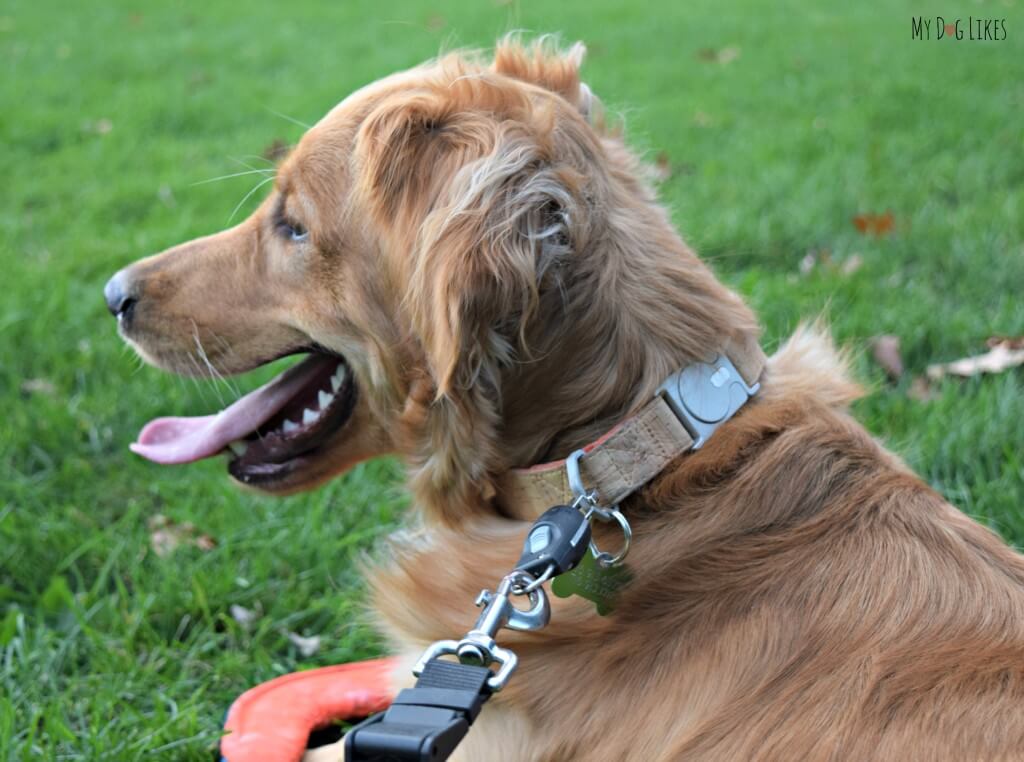 Well…It was STILL easy! While we love the cool design of our current leash, that’s pretty much where the love ends: it’s just not that easy to use on a little golden dog with a case of the wiggles. The magic latch could not be easier to attach, even with our little squirrel.

As we experimented with the Magic Latch, we realized we only needed to be in the general vicinity of the dangle for the two ends to pull toward one another and latch. Disconnecting it was also easy. We simply pressed in on the release button and pulled away at an angle. As you can see below, connecting and disconnecting happens in seconds.

We mentioned that we were eager to test out the Magic Latch with Charlie’s no-pull harness (below). We used it for weeks with his harness and were completely head over heals in love with it. For us, it seemed to really transform Charlie’s no-pull harness. I thought my days of bending over onto the ground in front of him and search through his luxurious locks for the D-ring were over; the dangle was easy to feel around for and there was no lining up required. 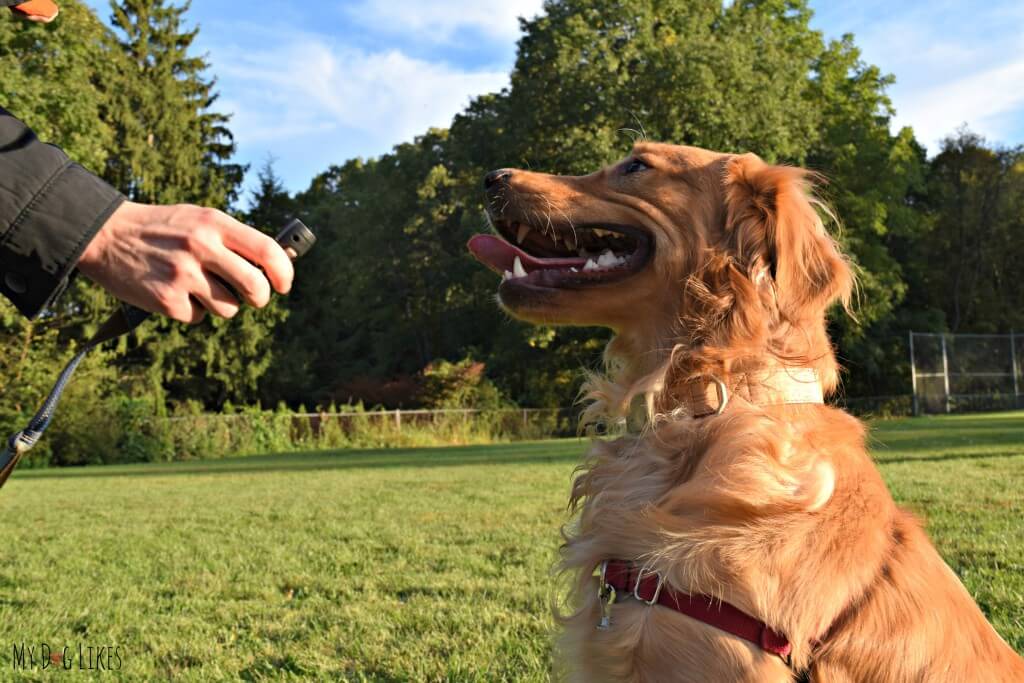 Unfortunately, after weeks of use, we had an issue. While out for a run with Charlie, the latch came undone. Everyone was safe. In fact, I think Charlie wasn’t even aware that it had happened. After readjusting and attaching Charlie to his ALU-Collar, we continued on our way and made it home. After arriving home, I emailed Debbie at Magic Latch and shared my issue.

To say that Debbie took it seriously would be an understatement. Debbie immediately reached out that evening asking if we could send her the unit and talk on the phone about the situation that occurred. This came as a HUGE surprise to the folks at Magic Latch, as they had never had a failure in the product. It came as a surprise to us too, we had been using it for weeks afterall. After analyzing the situation, Debbie and her team of engineers at Magic Latch and my at home engineer, Kev, were able to surmise the issue….A perfect storm of pulling and a cross-body harness. 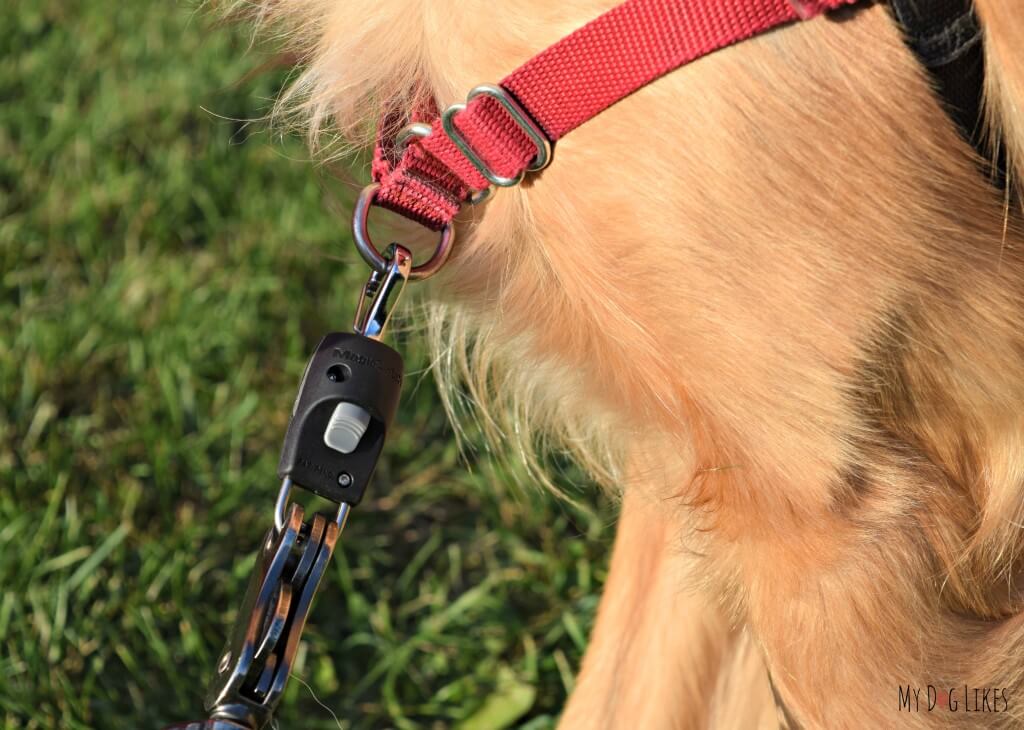 As you can see in the picture, Charlie’s no-pull, front-latch, harness, connects right at his shoulder. The combination of Charlie’s pulls and hitting up against his shoulder, exerted enough pressure to release the latch. The Magic Latch had been tested with all sorts of leashes, collars, and standard harnesses, but never with the front latch. Responsive immediately, Debbie put notice on the site (not for use with chest connect harnesses) and started working on new ideas for improving its functioning with harnesses like Charlie’s.

Despite the one mishap that we had… we still LOVE the Magic Latch. It is a real life saver when you have your hands full! It turns latching the leash into an easy one handed (really- a two finger) project! I have found it to be most helpful when I needed to wrangle both dogs by myself. It sounds silly, but it was nice to know that I didn’t have to concentrate so hard on leashing Charlie while trying to keep an eye on what Harley was doing. In an instant I could get him safely secured and back under my control! 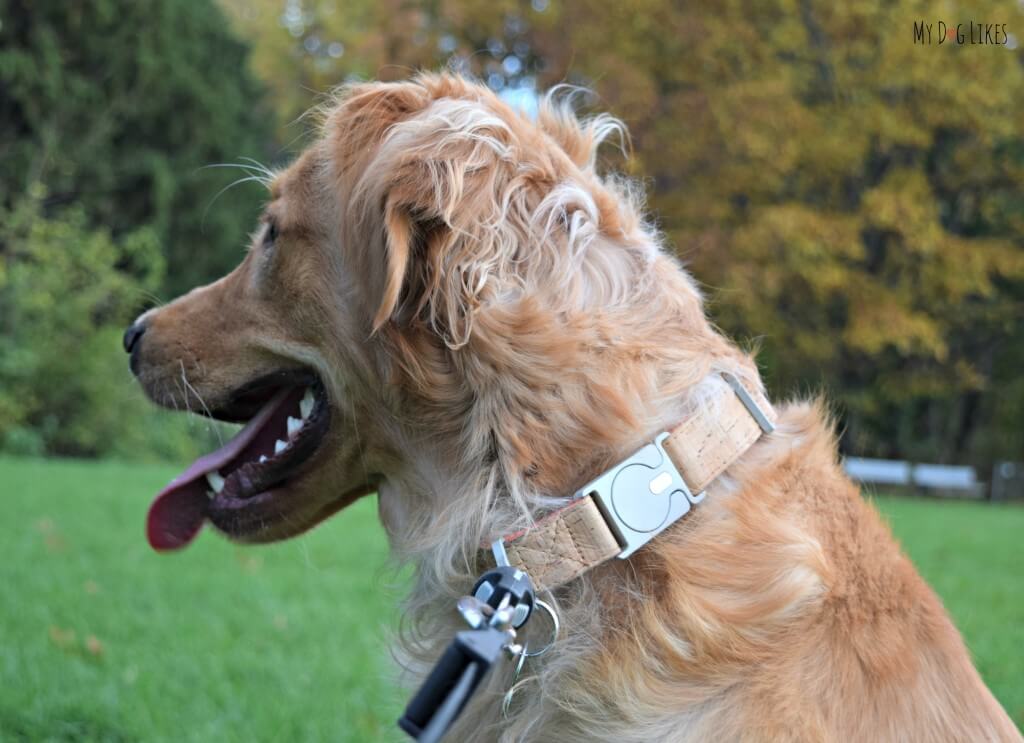 Puppy Pulls….Not a problem! As I’ve shared before, Charlie is an excellent puller!! I had no concerns at all with him staying safe and secure with the Magic Latch – the connection is very strong! Though the packaging says that the product is for dogs up to 85 pounds, I used it with Harley (95lb, non-puller) with ZERO issues (Note: if you have a big dog that pulls a lot I would definitely follow the Magic Latch weight recommendations, just to be safe!)

Overall Impressions on the Magic Latch

We would definitely recommend this product to anyone who walks their dogs or lives an active lifestyle with their pooch! In particular, if you are walking several dogs, have to split your attention between multiple dogs/a child on walk, typically carry things with you (coffee, cell phone, etc.), have lost some dexterity/mobility as a result of aging, arthritis, pregnancy etc, or leash/unleash a lot, this is a must have! I could also see this being AMAZING for animals who work as therapy or service dogs! Magic Latch is just so convenient, easy, and secure. 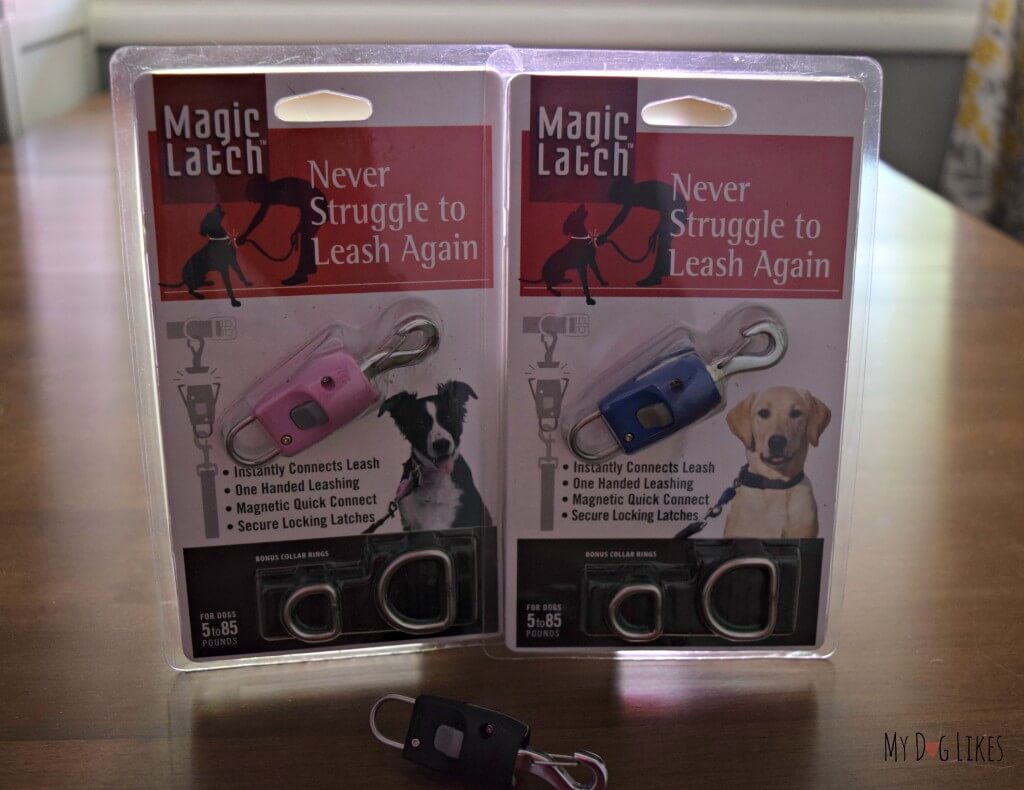 Also, while no one really wants to think about the white fluffy stuff that will be here before we know it, I take some solace knowing that the Magic Latch will allow my fingers to stay snug and warm in my mittens when leashing, rather than exposed to the elements, picking ice chunks from the boys’ collars. We also thought it would be a great idea to purchase extra dangles (available on their site) so that we can have them attached to different collars. While latching and unlatching is super simple, I love that Magic Latch has thought of this and made them available to their customers. (Kev-I’m adding it to my X-mas list :)) 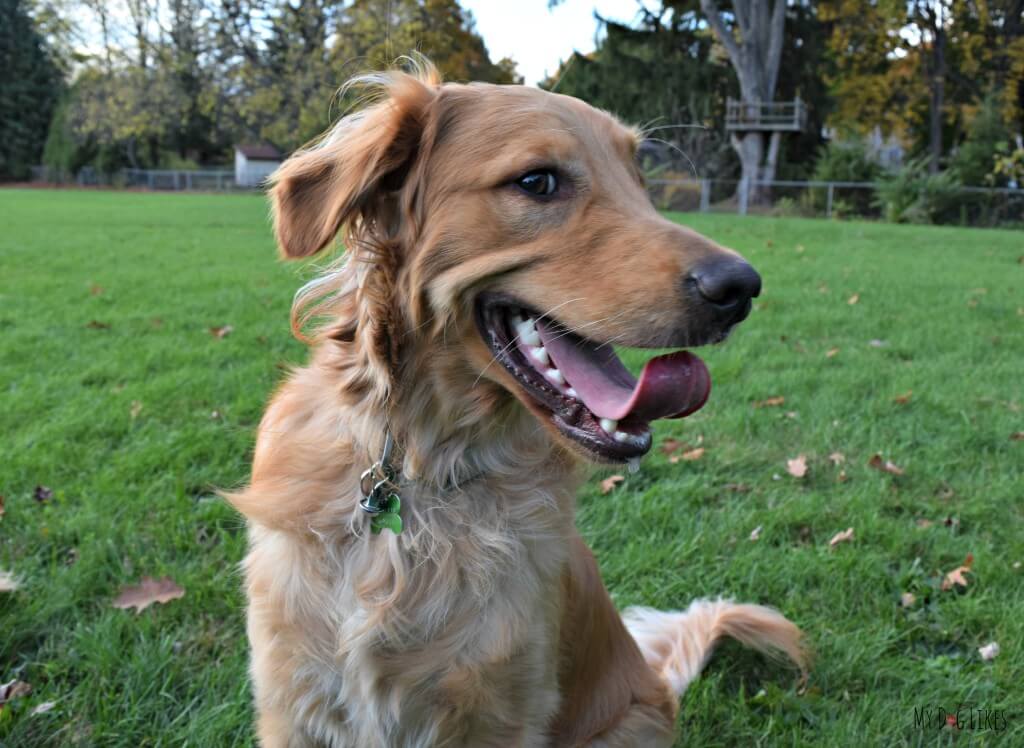 Though we had one issue when out for a run, the issue has since been addressed and the appropriate warnings issued. Magic Latch engineers were eager to solve this problem and already have ideas for how the next model can be improved for all types of harnesses. Until then, stick with standard (back buckle) harnesses and flat collars. We have used the Magic Latch for weeks now and have been so happy with it!