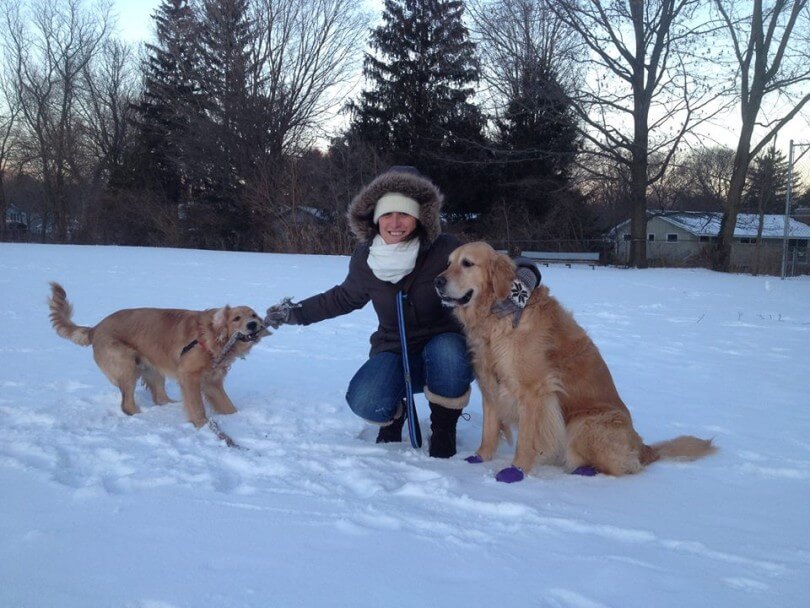 Often times we overestimate the toughness of our dogs paws, and their resistance to the elements. When traveling through snow or remaining outside for an extended period, snow can build up between the pads of your dogs paws. This build up causes significant discomfort and irritation. Additionally, the winter brings heavily salted roads and sidewalks full of chemical ice melts. Aside from causing irritation, this poses an additional hazard when your dog licks their sore paws. For these reasons it is a great idea to take preventative action to protect your dogs paws.

Pawz Waterproof Dog Boots are natural rubber dog boots that fit over your dogs feet. They feel much like ballons and slide on easily. Unlike most other dog boots, Pawz are not padded and therefore allow your dog to feel the ground beneath them. They come in packs of 12 and are available in several different colors and sizes. They are 100% biodegradable and reusable until torn.

We found that these protectors are quite easy to get on. However, we recommend that you spend a few minutes getting your dog used to them before their first walk. Initially, Harley felt very strange with them, reluctant to put each paw on the ground after the protector was put on. In fact, after all the protectors were on Harley did not want to move. He stood in place as if cemented to the floor. It took some real coaxing to get him to walk around, which he did very awkwardly at first. After a minuter or two of messing around, he got used to the protectors, and we headed out. They did a wonderful job preventing snow and ice buildup between paws, as well as irritation from road salt. Harley had issues with bleeding paws in the winter prior, but these protectors got rid of that problem entirely.

We had tried other boot like protectors before, which Harley flat out refused to walk in. Despite having the appearance of being shaped to a dogs foot, and Velcro straps for tightening, Harley did not feel secure enough with them to move.

We were very happy with the fit of Pawz protectors. I think that Harley enjoyed the way he could actually feel the ground beneath him. This gave him more of a sense of security and confidence.

The Pawz protectors were quite durable, and we only ended up using about 6 individual paws for a whole season. This was more than reasonable considering the cost. My only complaint with Pawz is that the large size is only available in purple. I am sure Harley feels that patrolling the neighborhood in purple boots doesn’t do much for his tough guy image. Aside from the fashion concerns, these protectors are a great product and value and I highly recommend them for anyone living in snowy climates.