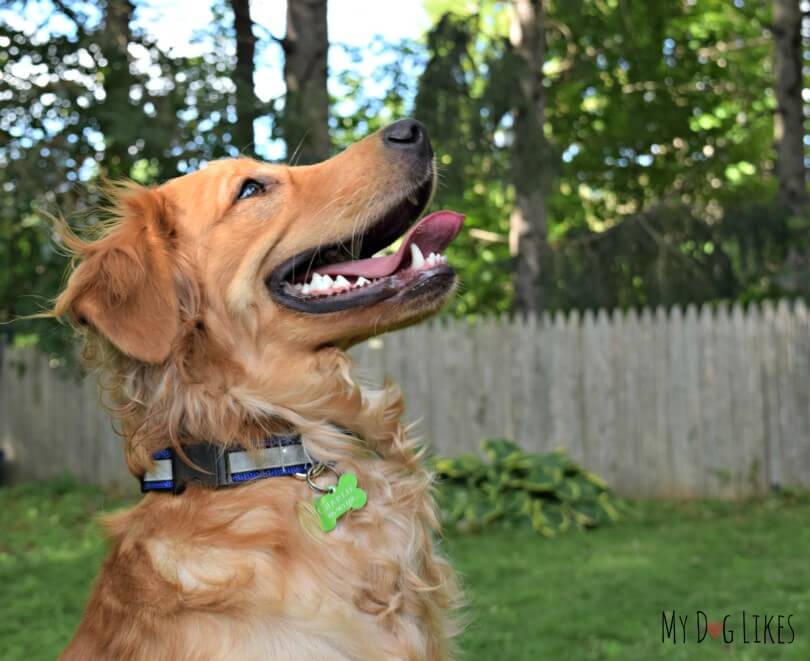 We all know that exercise is crucial for a healthy (and well behaved) dog.

That is why we make a commitment to take the boys on daily walks.  For night owls like me, an early morning walk is out of the question, so walks become an after work activity.  We live in the Northeastern US however, and sunlight is often at a premium.  The days are rapidly getting shorter and in just a couple of months it will be dark by dinnertime! What this means is that our daily walk is a walk in the dark.

No matter what the traffic is like in your neighborhood, it can be a bit unnerving to be approached by cars at night, wondering if they see you and your dog.  Additionally we have had more than a few occasions of startling (or being startled by) other dogs and owners that did not see us approaching in the dark.

For these reasons we were very excited when Illumidog approached us and asked if we would like to review their Reflective SOLAS Dog Collars!  They were also kind enough to send one each for Harley (large)  and Charlie (medium) to test out. 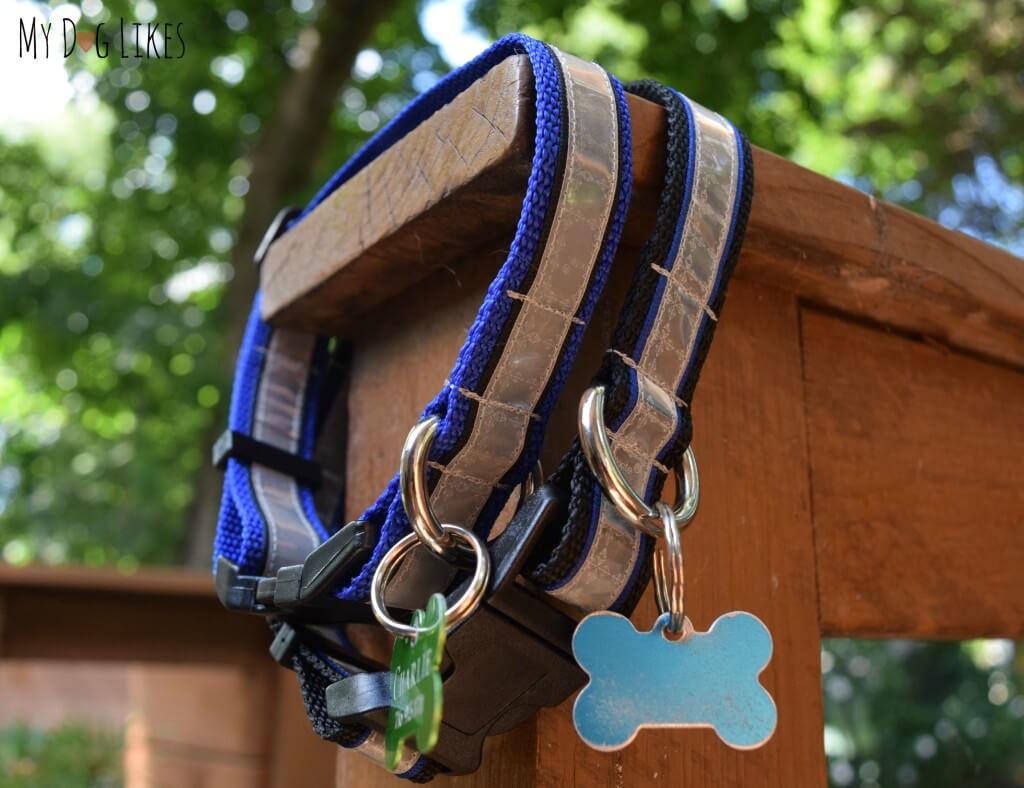 We love the story behind Illumidog.  The company was founded by a couple of busy dog owners (who can’t relate?) and their identification of a need in the market. Just like us, their day jobs often kept them from getting to dog walking until after dark.  With a black foster dog, visibility was a clear concern so they tried out some of the reflective dog collars already on the market.  What they found was that these collars were not particularly bright, and did not offer the peace of mind that they were looking for.

After a bit of research they discovered SOLAS reflective tape, and decided to incorporate it into their own line of dog collars.  Now their company, Illumidog, offers a wide variety of reflective dog safety products including leashes and collars.  Their products are also made right here in the USA and include free shipping! 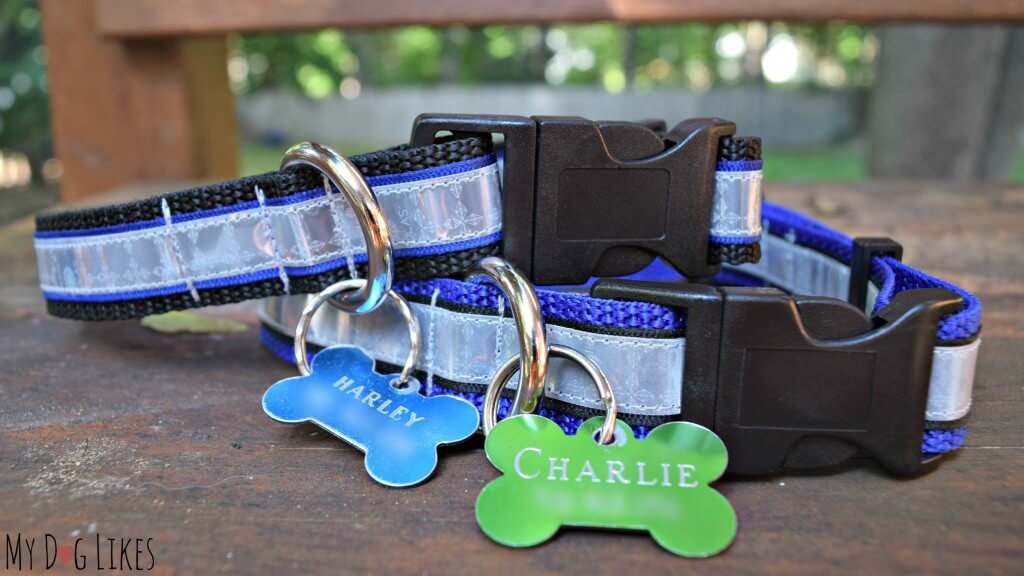 So what is so unique about these Reflective Dog Collars?

You may have seen reflective collars before. In fact we had tried one out several years ago and were not terribly impressed, the device had to be charged regularly and it just wasn’t practical.  The key to the Illumidog Reflective Dog Collar is the SOLAS Prismatic Tape.  This is the same type of reflective tape used by the US Coast Guard for their reflective vests!  I am always interested in new technologies so I looked into it a bit more.

SOLAS is actually an acronym that stands for Safety Of Life At Sea.  It is a Coast Guard designation and conforming reflective tapes are used in marine environments to assist in search and rescue operations.  What is unique about this tape is its extreme reflectivity.   It is several times brighter than standard reflective tapes and also has a much wider reflective range.  What this means is that oncoming headlights or other illumination doesn’t necessarily have to be pointing directly at you for it to be visible.

Initial Impressions of this Dog Collar

The Illumidog Reflective Dog Collar is clearly well made.  The polypropylene webbing is very tough and the metal D ring is heavyweight. The plastic buckle is not quite as heavy duty as we are used to, but was certainly sturdy and snapped into place easily. We weren’t sure what to expect with the SOLAS tape, but it is heavy duty and does not scratch or nick, even when the dogs are aggressively and somewhat haphazardly scratching themselves or playing! 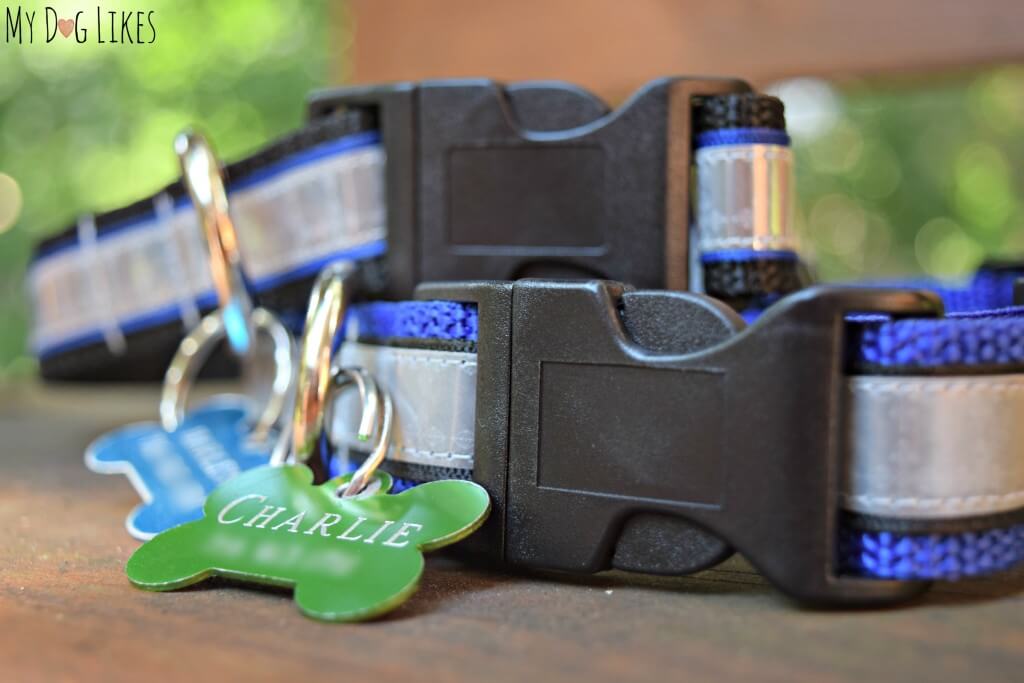 They are very attractive and looked great when we put them on the dogs (of course). The colors are bright and stand out even under all that hair. In the daytime the reflective tape tends to look more grey, you wouldn’t really even know that it was a reflective collar! Now, that’s not to say that when the sun catches it just right, they don’t look a little fancy, because they do! Shine on you beautiful diamonds you! 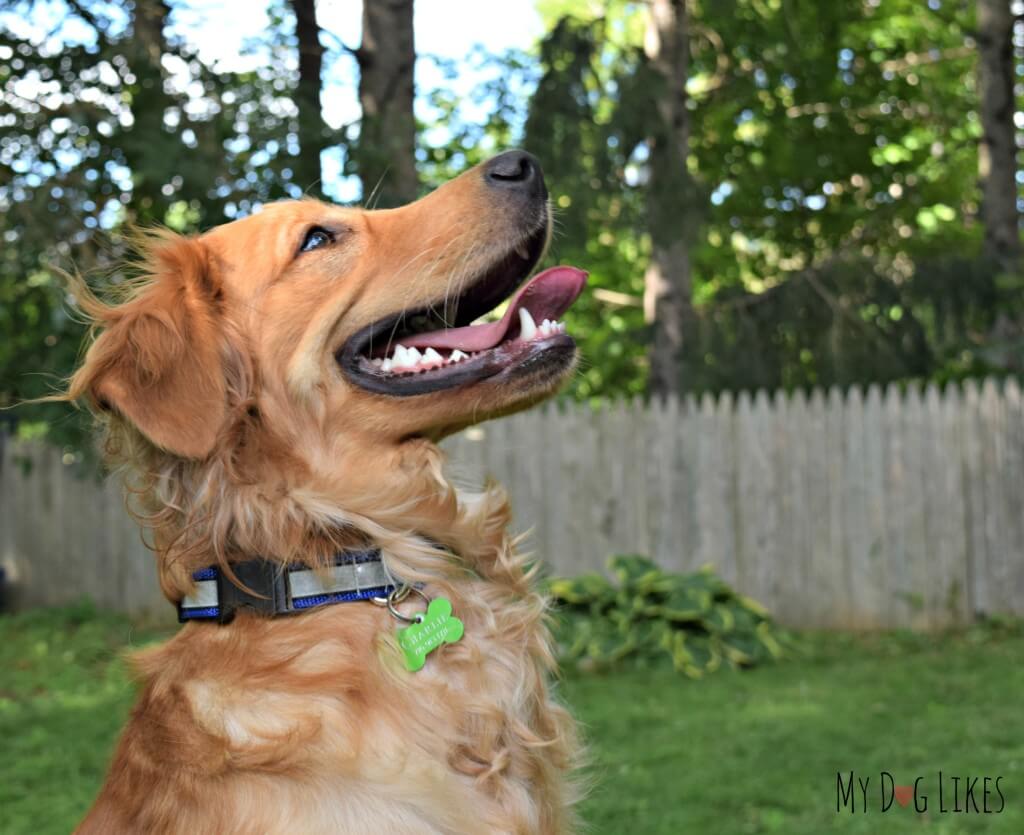 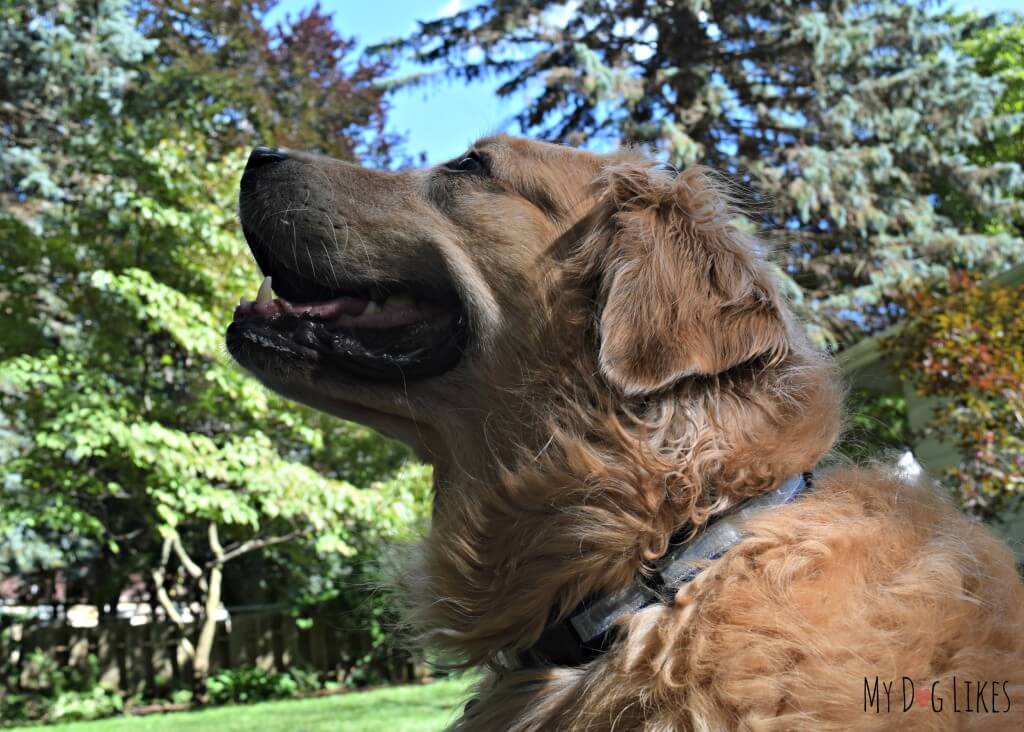 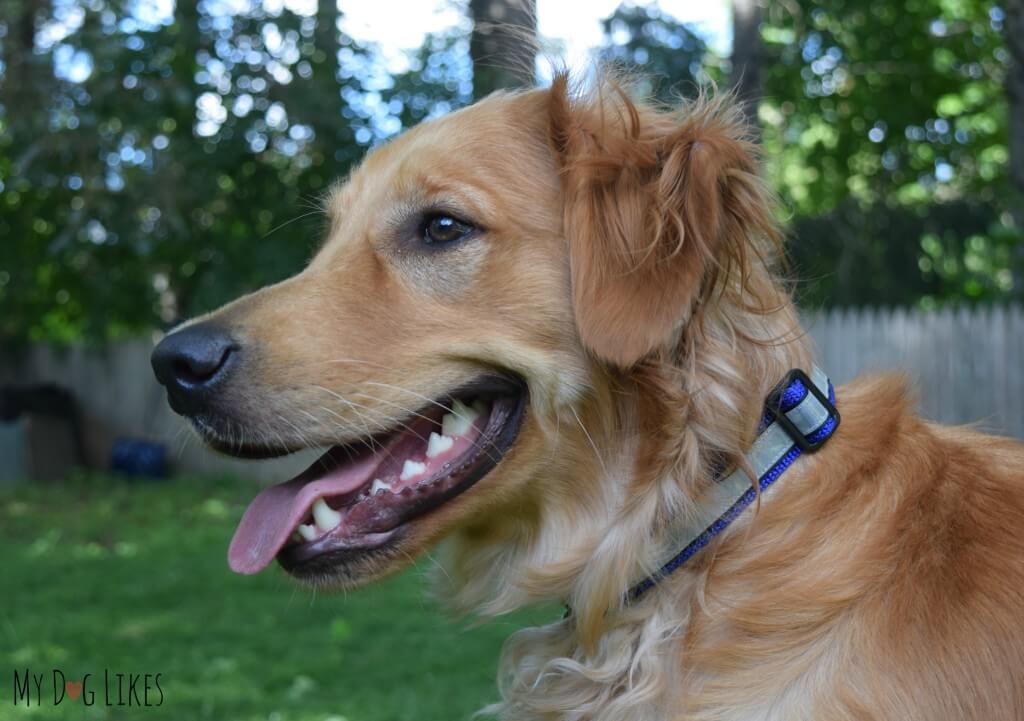 On to the Performance Tests! (Our Reflective Collar Review!)

It is difficult to do justice in a picture just how reflective these collars are.  We tried photographing in a dark room, with and without camera flash, outside with a flashlight, and even with our car headlights!  Below are some of the clearest examples, but the true effectiveness must really be experienced.

The first picture is at dusk, which we think is one of the most dangerous times to be outside with your dog. Often headlights aren’t on, and visibility is low. Even in this low light, the tape was glowing! 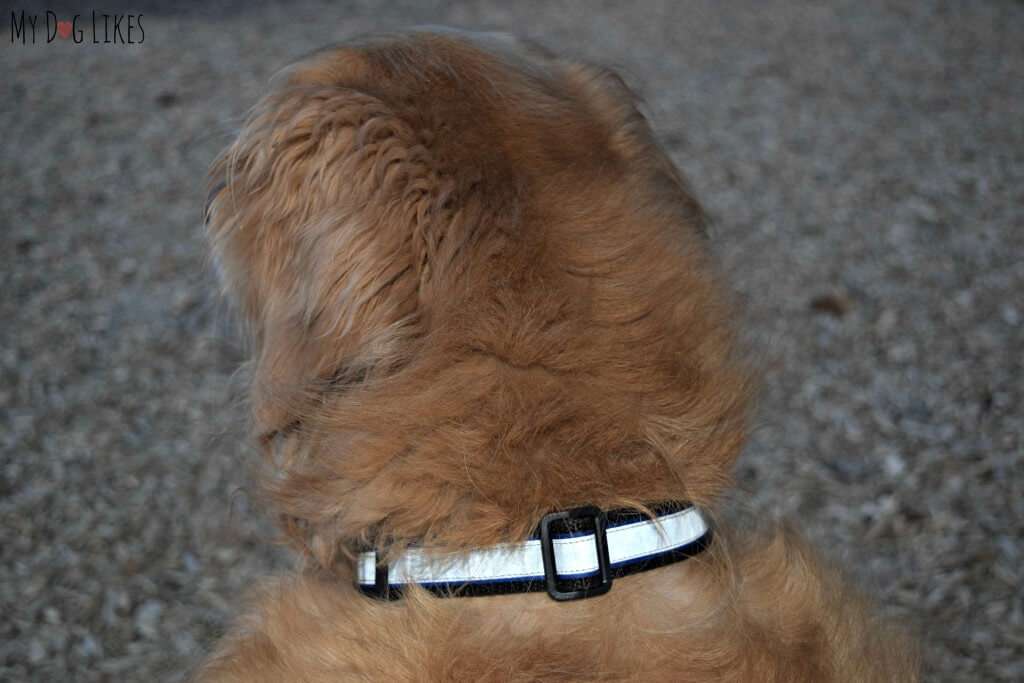 These pictures were take outside at night. A comparison to the daytime picture shows just how bright these collars reflect. It is a clear transformation from their daytime grey to a nighttime silver glow!! 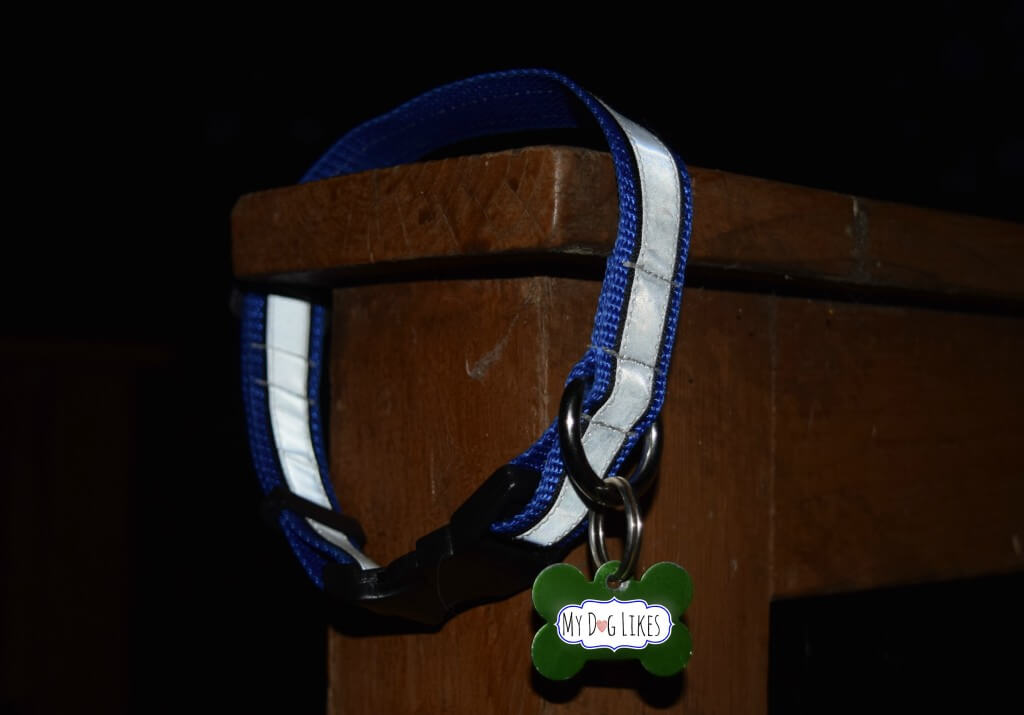 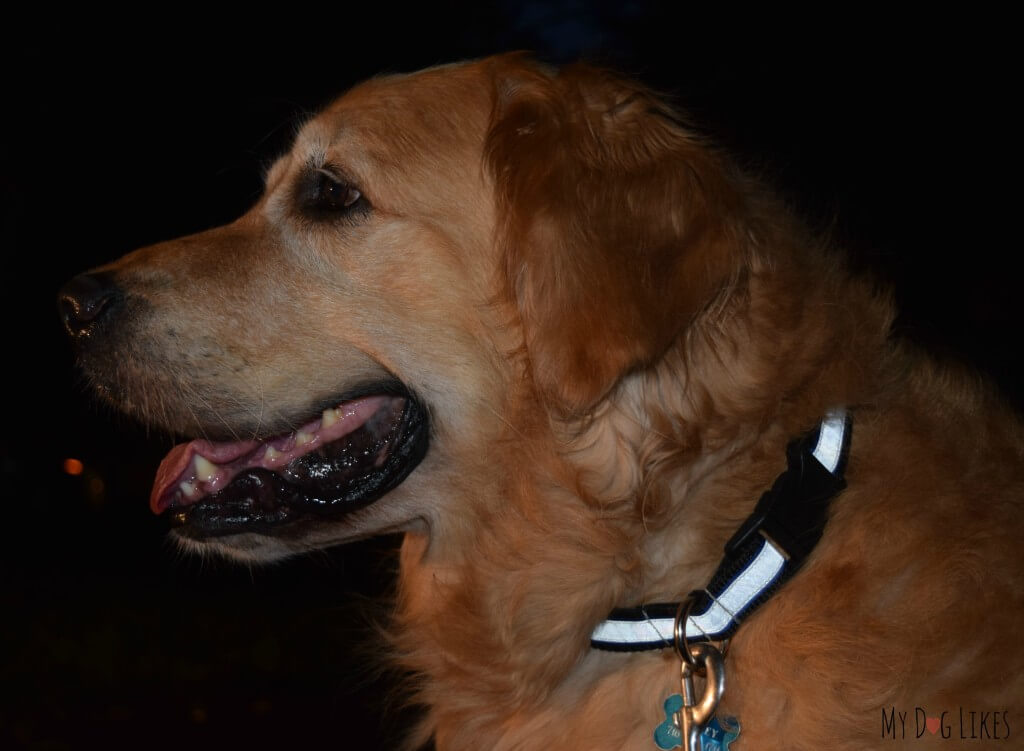 I think that the Illumidog Reflective Dog Collar would also be great for camping, allowing you to keep an eye on your dog roaming around in the darkness (we’ll keep you posted after our camping trip this weekend). As you can see in the photo below, this collar seems to soak up any available light. Even though Harley is not directly in the shot, you can see him glowing in the background! 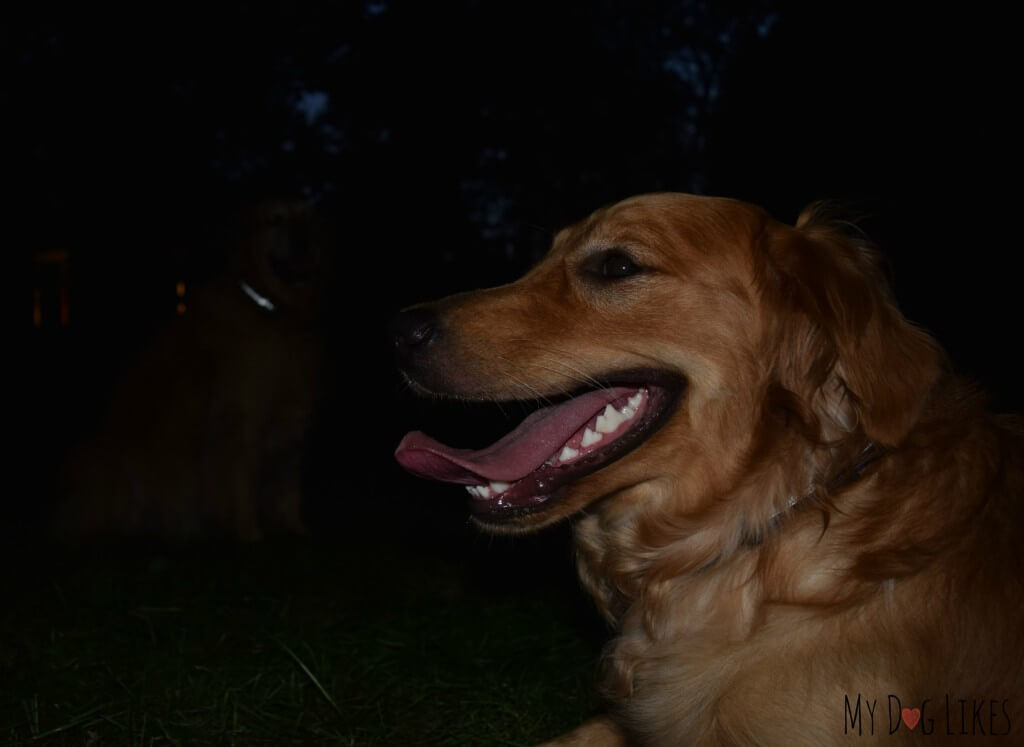 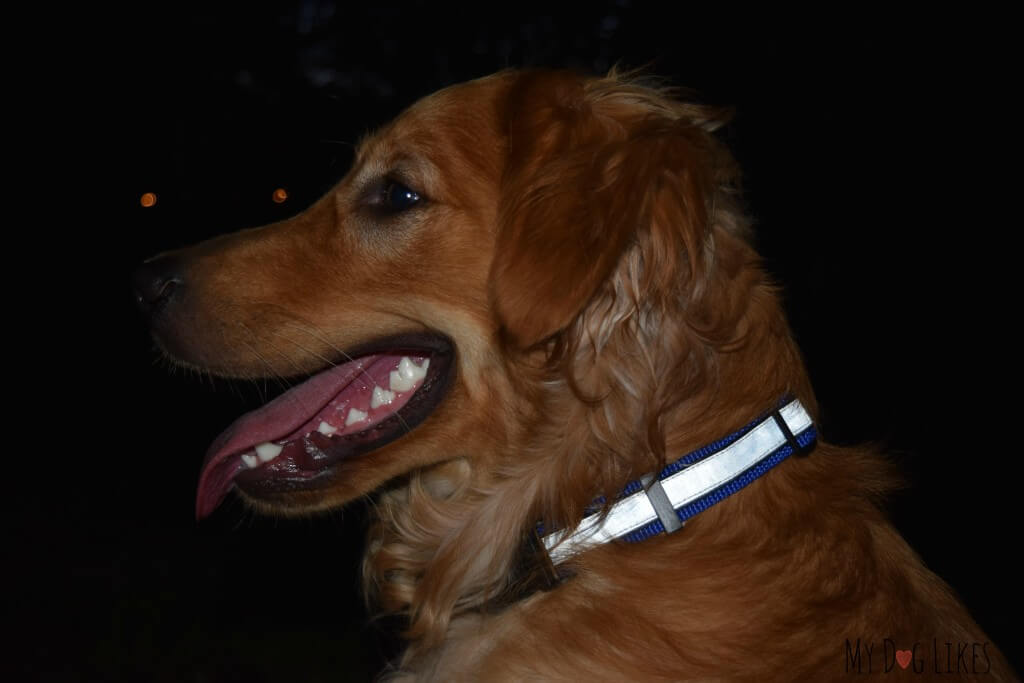 We were really impressed with these collars. They are stylish enough to wear all the time and have the durability to stand up to the daily grind (playing, scratching, swimming, rolling,etc). Not knowing much about the SOLAS tape on the collars, I was nervous that when the boys scratched their necks, the tape would scrape off or nick, but upon seeing these and then testing them out, there are no concerns with that.

At night, these collars really come alive, reflecting all of the light around them. Because they are so reflective, cars can pick us up from a far distance, giving lots of warning that we are coming!  Even with long hair haired dog, the collars were visible and the dogs easy to see. We were so impressed we want to test out the leash and we would love to see a Illumidog harness come to market! Pair this with a reflective vest for dog walking and you can’t be missed!

Want to pick one up for yourself?