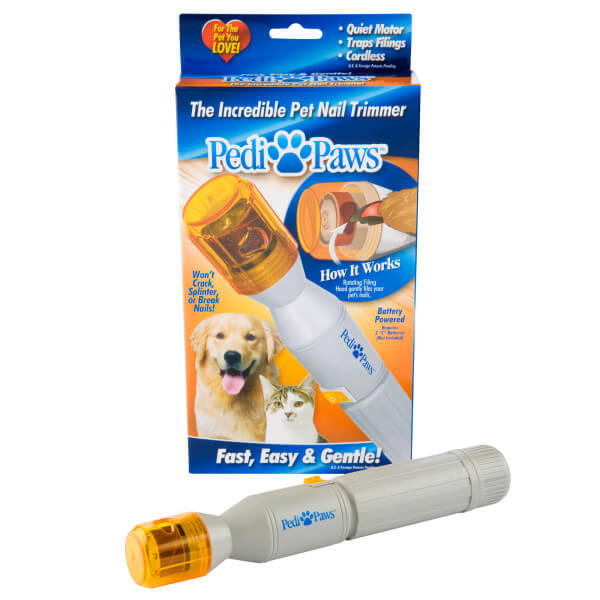 No dog enjoys getting their nails trimmed.  While it is tough to complain too much about Harley, who accepts it with little resistance, it is certainly not a pleasurable experience for either of us.  After seeing the Pedipaws Pet Nail Trimmer advertised on TV I thought that perhaps there was finally a better solution, and decided that it was worth a shot.

The Pedipaws pet nail trimmer is a cylindrical device roughly 2″ in diameter and 11″ long.  Inside the device is a rotary sanding drum which works to shape down your dogs nails.  The access to the drum is limited to a small hole for both safety, and catching of clippings/shavings.  The device weighs 8 oz. and is simple to operate and easy to manipulate.

It is recommended that you allow your animal to familiarize themselves with the Pedipaws before attempting to use it, both before and after turning it on.  Harley reacted decently well to the device itself, giving it a good sniff and a couple of licks.  Once turned on however, he appeared somewhat uneasy about the sound and vibration.  To operate, one nail at a time is held through the opening against the sanding drum.  Harley is easy going and felt fine allowing us to do this.

Our high hopes were quickly dashed when the grinding proved quite ineffective.  The power of the device and the grit of the emery filing wheel were not enough to efficiently shape Harleys’ nails.  It took significant time and effort to make progress, too much to ask from even a patient dog.  As time went by Harley seemed more and more irritated by the vibration, to the point where he had clearly had enough.  Perhaps it would work well on a smaller dog with thinner nails, but in our case the Pedipaws was not the solution we were looking for.

The Pedipaws pet nail trimmer did not live up to our expectations.  The product was barely able to get through Harleys’ nails, and certainly not worth the time that would be required to get the job done.  Perhaps the product would work better on a smaller dogs nails, but for us the quick discomfort of standard clippers is preferable to a drawn out process.
Share
Tweet
Share
Pin
0 Shares