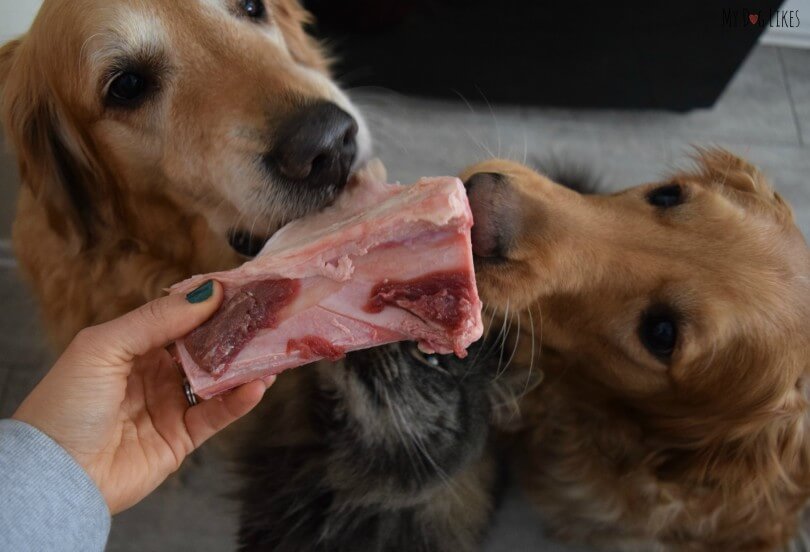 Raw feeding may be one of the most talked about, yet least understood topics in the pet industry. While it seems simple on the surface, there’s a lot to learn to make sure that you are providing adequate nutrition for your pets – and doing so safely.

Figuring all this out and preparing the food on your own is a lot to take on for most dog owners (us included!) Thankfully, there are easier options available for those who want the benefits of a raw diet, but lack the knowledge or time to DIY.

Primal and the BARF Diet

We first learned about Primal and their raw philosophy at Backer’s Total Pet Expo. We had noticed Primal products in our local store, but were intimidated with the idea of feeding raw at the time. After chatting with a Primal representative, our fears vanished…we were intrigued! Our interest turned to excitement when we were offered the opportunity to test out and review Primal Raw for our readers!

As advocates of the BARF dog food diet (Bones and Raw Food or Biologically Appropriate Raw Food), Primal believes that our pets should be eating a diet that mimics the eating habits of animals in their natural habitat, the wild! Simply put, the BARF dog food diet consists of muscle meat, organs, fresh fruit/vegetables and bones.

Throw me a Bone

Giving bones to dogs can be a somewhat controversial topic. So we thought…Where better to begin the discussion about the Primal diet? With so many conflicting statements and opinions about bones out there, its hard to know what to believe. While there are potential hazards to look out for, bones play an important role in a balanced raw diet.

I would like to preface this discussion by reminding that there are many different types of bones and that they should only be given under direct supervision! 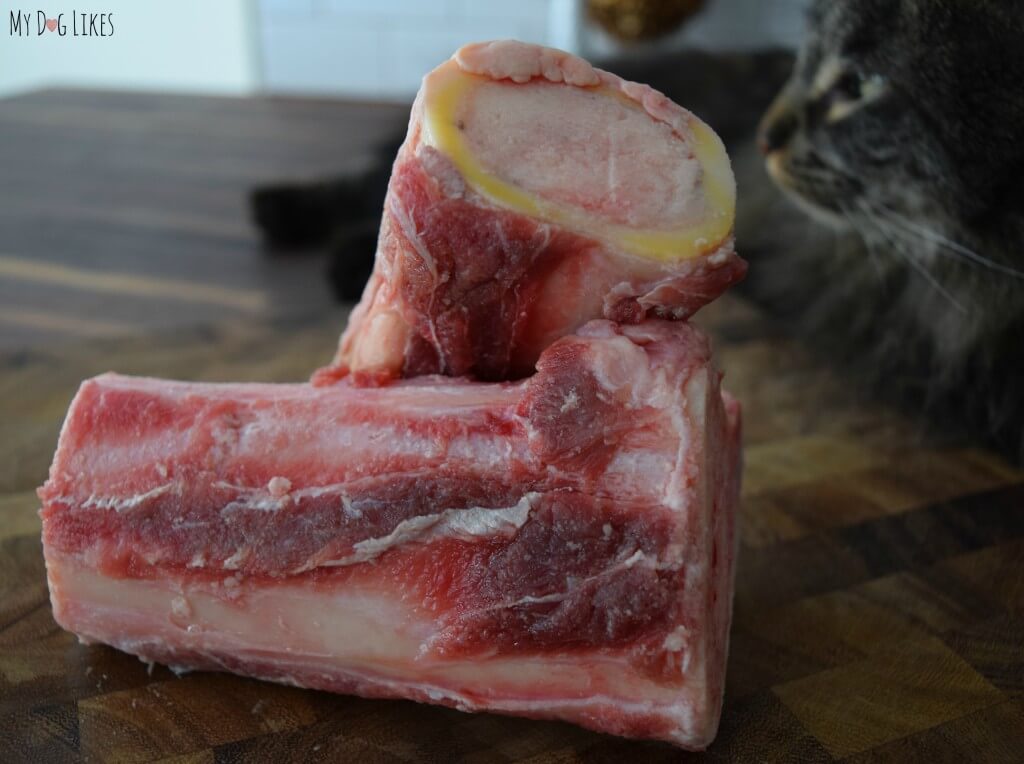 The Importance of Bones in a Raw Diet

For years we have given the boys bones as a special treat; but it wasn’t until we started learning about raw feeding that we found out how crucial they are to a complete raw diet.

You may think that a bone is a bone when it comes to feeding your dogs. Well…..not exactly. 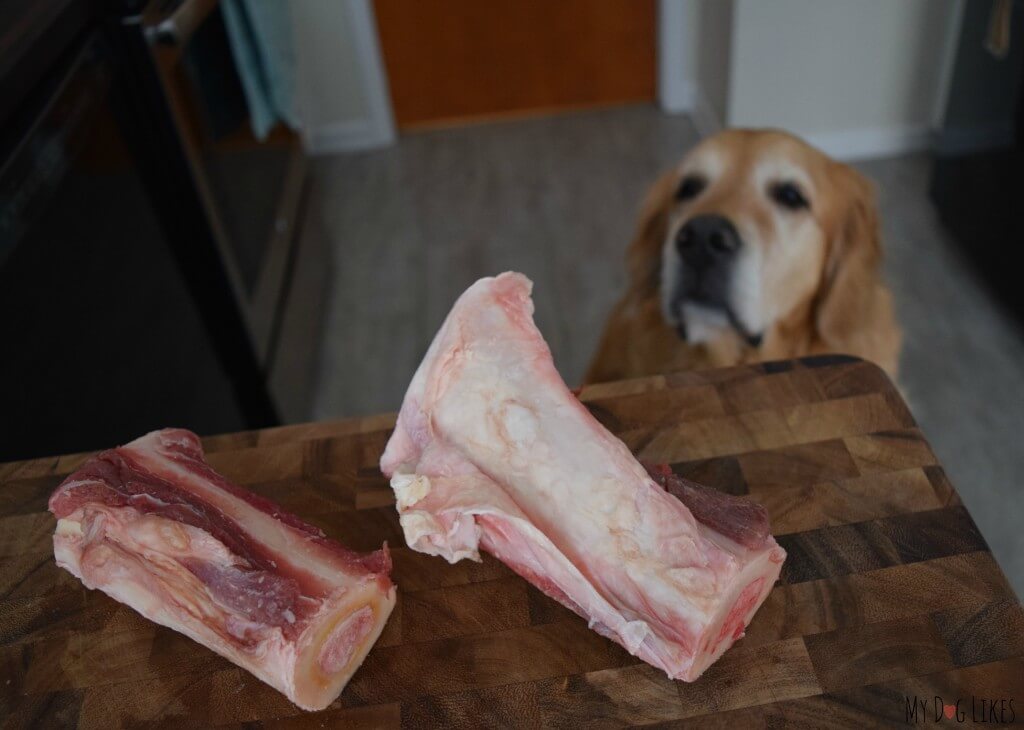 Primal’s Raw Meaty Bones can be completely consumed.  This category includes chicken/ turkey necks and chicken backs. They are considered “soft bones” as they do not splinter. Instead, they are able to be crushed by your dogs strong molars and powerful jaw. These bones are a natural source of the calcium needed for a strong skeletal system.

Primal’s Recreational Bones are not to be fully consumed. This category includes marrow and femur bones. They are great for tooth and gum nourishment and satisfying a dogs need to chew.  They should be discarded after a day or two when all the meat and marrow has been removed.  These bones are significantly harder than the raw meaty bones and can cause cracked or chipped teeth if left around for prolonged chewing.

After spending a week apart from them visiting family, we thought the boys deserved a special treat. We figured the Primal Marrow bones in our freezer would be just the thing! 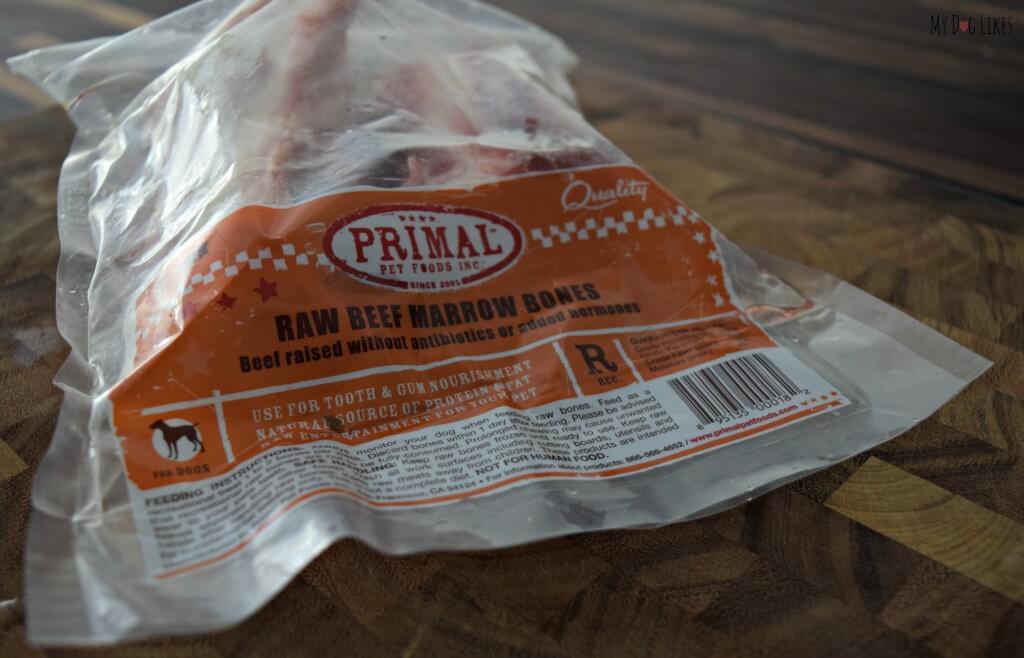 These hormone and antibiotic-free marrow bones are sourced from beef raised in the USA! They are roughly 4” long and 1-½” in diameter.  Most importantly, they are covered in quite an enticing layer of muscle, tendon, and fat (or so the boys would indicate!). 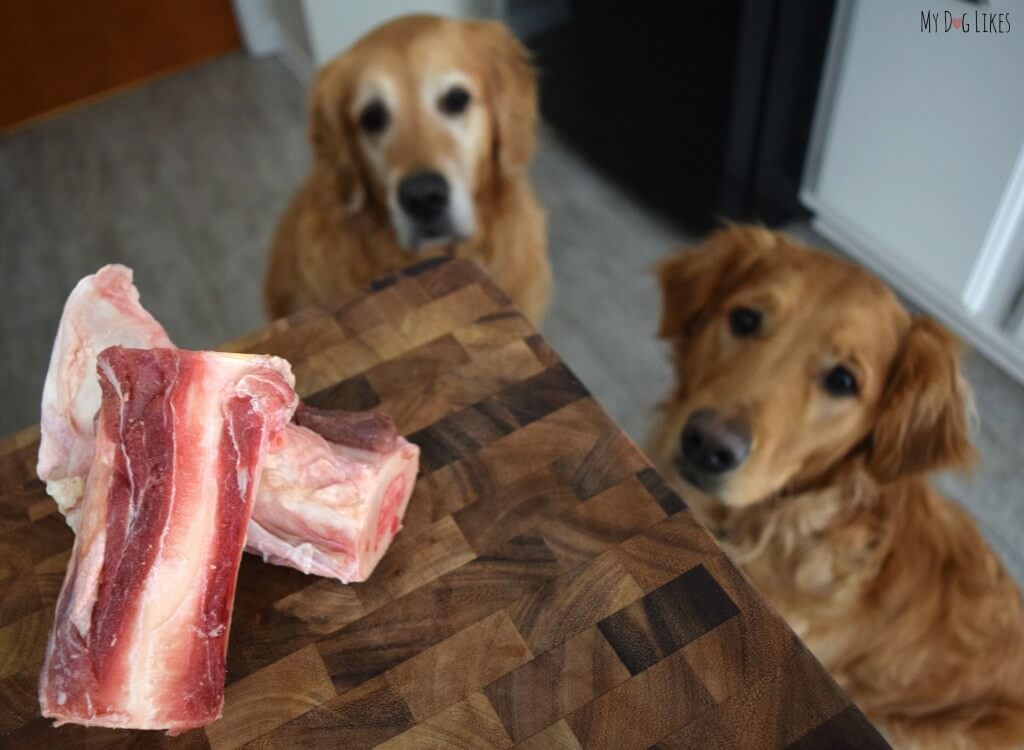 Ideally we would have tested these bones outside – but with a deep snow pack and windchills of -20, that was clearly not happening!!

You may be wondering how on earth you feed raw meaty bones inside without making a mess?!

Well, for starters these bones are to be kept frozen until it is time to eat. A cold hard bone is going to make much less of a mess than one that is fresh or fully thawed!

We decided to keep them isolated in the kitchen while they were enjoying their Primal bones. Here, we could easily wipe the tile floors when they were finished. If you don’t have a convenient cleanable surface, laying out a large beach towel that you can throw in the wash will do the trick too! 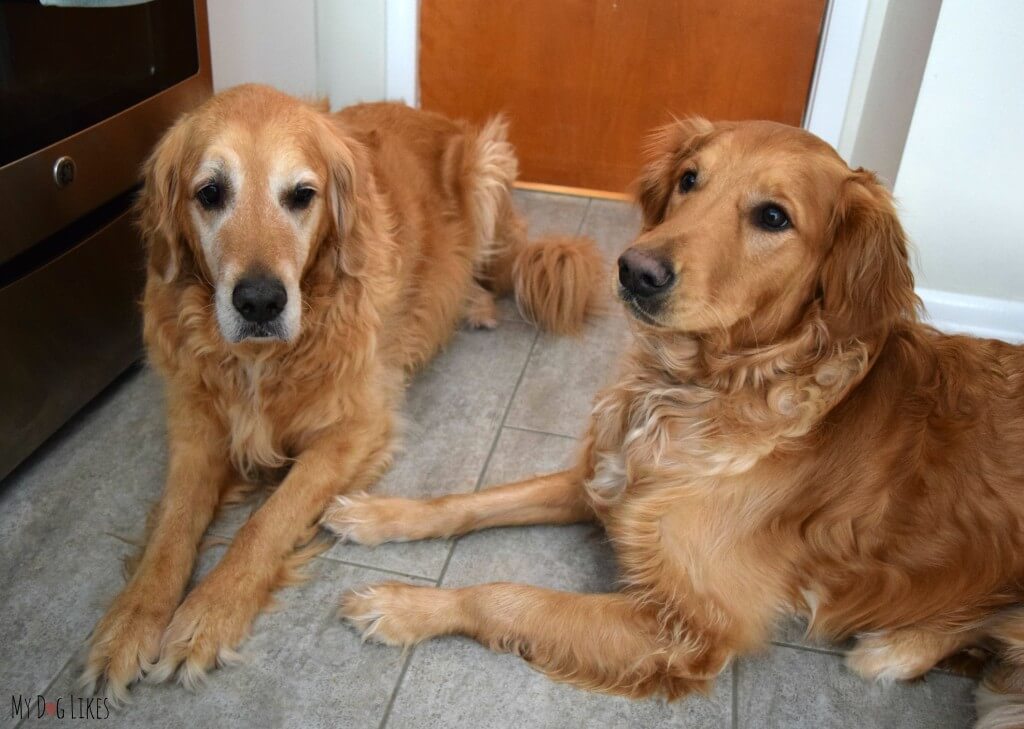 With the crinkle of a bag, and the aroma of fresh meat in the air, we had some curious pups! Once they narrowed down where the sounds and smells were coming from, the boys were at full attention. 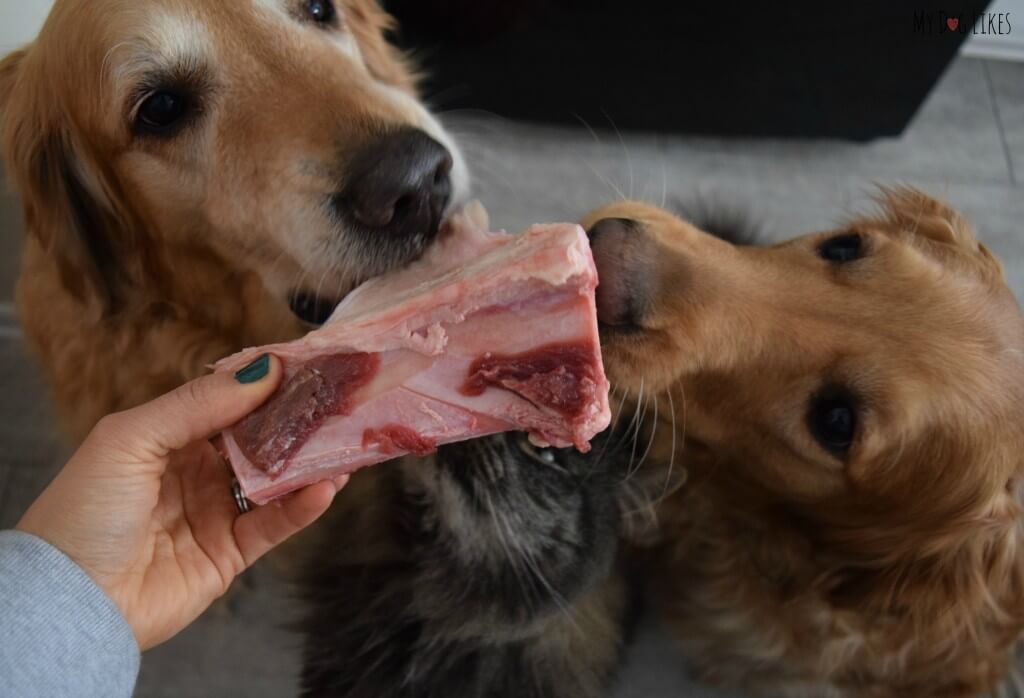 “Is this real life”

I gave the boys the chance to sniff the Marrow Bones to see if they might be interested  (Ha!). Each gingerly licked the bone as I held it and stood there not knowing whether this was real life and they could take the bone from me or not! Although sometimes they engage in some pretty wild behavior while they are waiting for goodies to drop, this was different; nothing but laser focus! 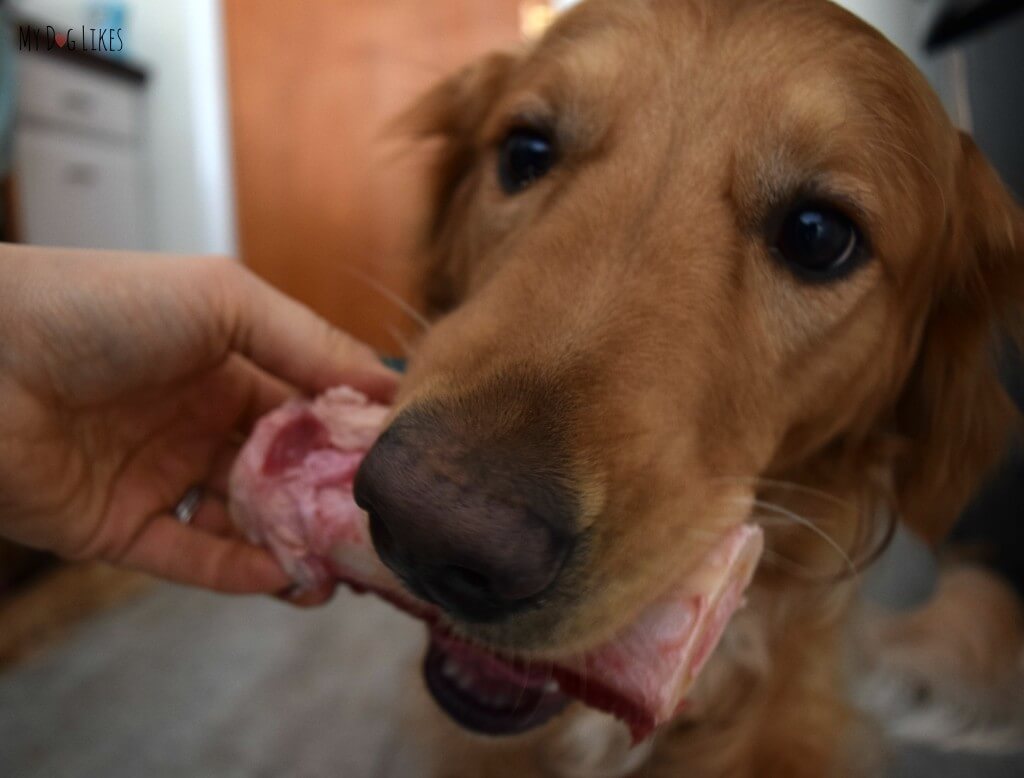 Once I assured each of them that it was OK to take the bone and settled them into their respective corners of the kitchen, it took no convincing whatsoever to get the boys to work pulling bits of flesh from their prized possessions!

It took the boys about 30 minutes to 1 hr to strip the bone of its flesh and remove most of the marrow. While prolonged “chewing” isn’t good for your dogs teeth, eating the Primal Beef Marrow Bone was different since it consisted of licking and tearing primarily. It was great to see the boys acting as they would in nature; using their brains to problem solve and their teeth to rip and tear away at the flesh. 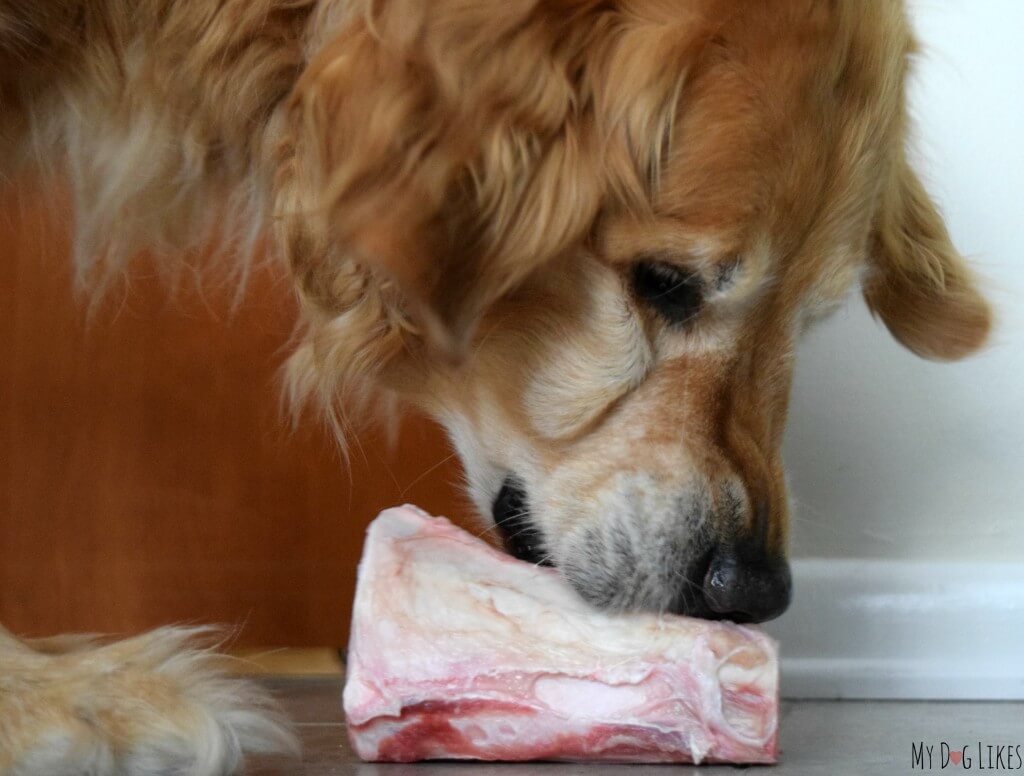 As the boys worked through the bones, they slowly thawed and became slightly more “wet”; however, this closely coincided with most of the flesh and tendon stripping and didn’t make a noticeable mess on the floor. 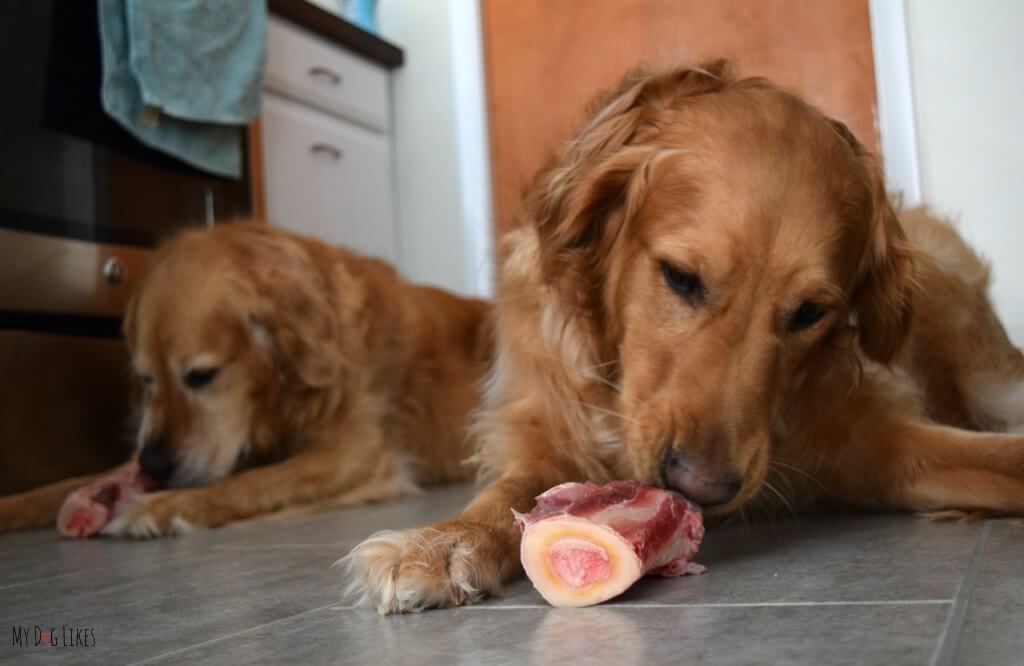 Frustrated with the slipping and sliding and difficulty “holding” their bones on the slippery kitchen floor, at a couple of points, the boys tried to get up and take their bones to the carpet for a better grip. A little problem solving fixed this in a jiffy and resulted in giving each of the boys a hand towel to eat their bones on….Problem solved! 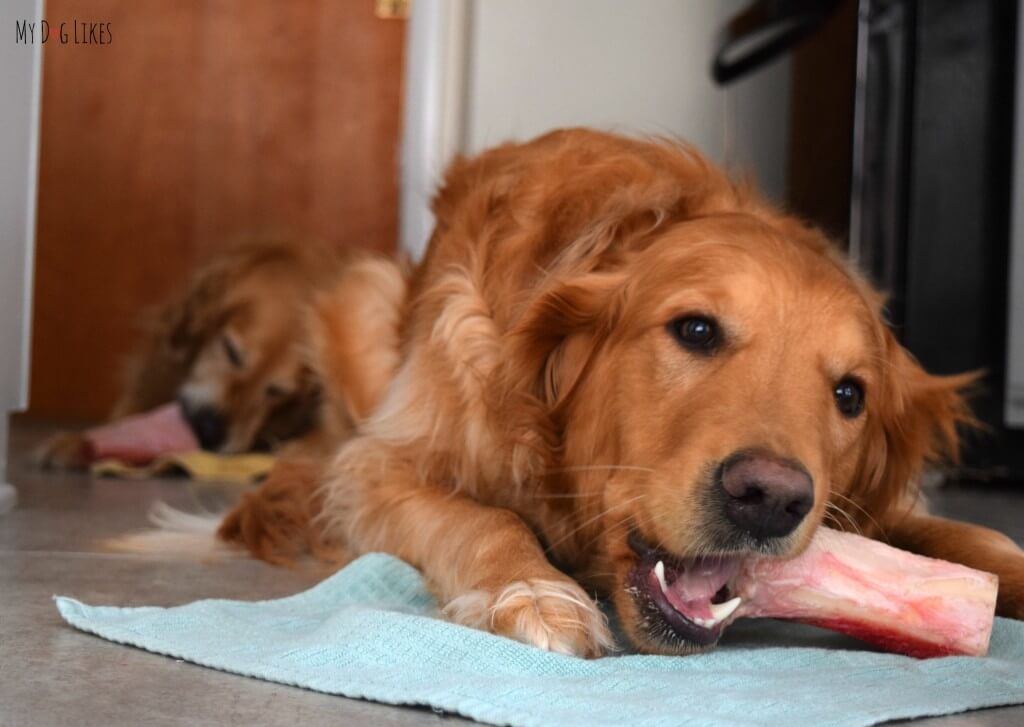 If your dog knows the “place” command (returning to a blanket, bed, or special spot) using a towel is a helpful tip, as a quick command easily redirected the boys back to their “place” when they tried to make an escape to their favorite chewing spots (ie. the furniture and carpet!). 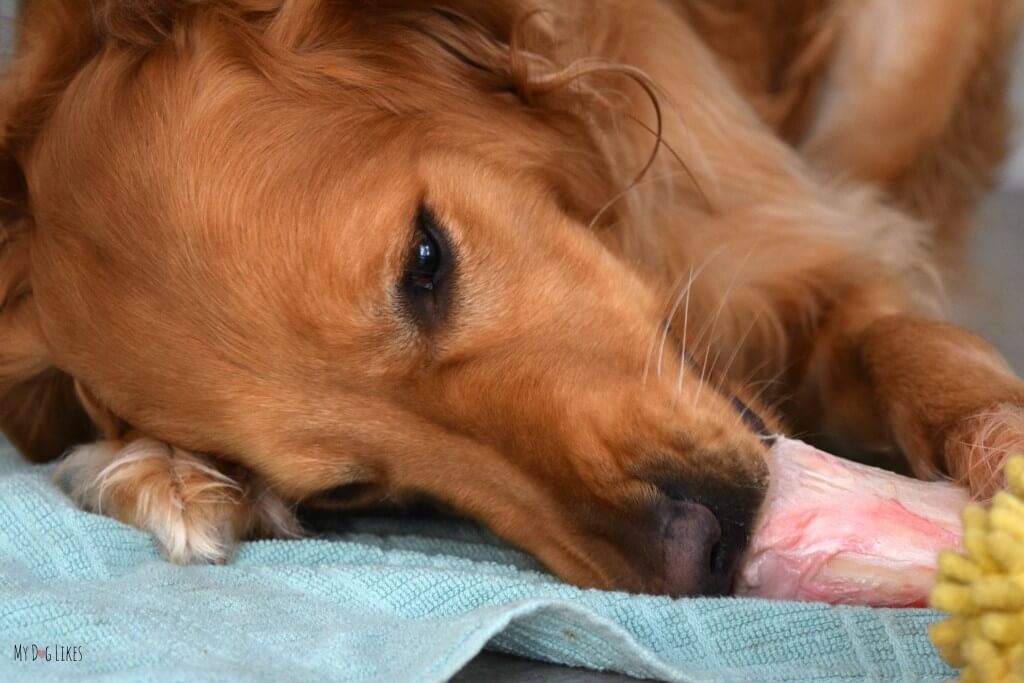 After all the meat and tendons had been stripped from the bone, I simply threw the towels in the washing machine to keep things sanitary.  A quick spray of disinfectant on the kitchen floor, and we were back in business!

After stripping the bones of all the flesh-the party didn’t stop! The boys intermittently chewed on or carried around their treasures (bones) for the rest of the day and into the next morning! The boys would have chewed on these bones relentlessly with no breaks, so we distracted them and took the bones away for periods of time to give them a break. With any bone it is always important to monitor your dogs and watch for signs of fatigue or splintering/breakage. Happily, a full day later, there was still no splintering despite hours of enjoyment. 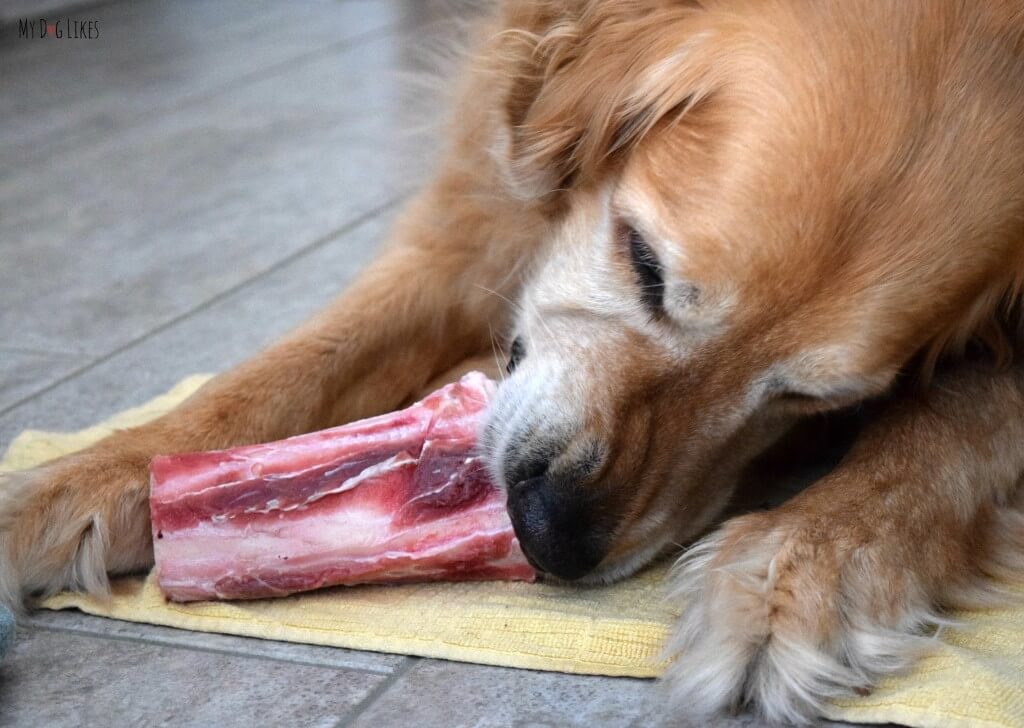 According to package instructions, Primal Beef Marrow Bones should be taken away after 24-48 hours – which just so happened to align with Harley’s oral surgery (he is having a mass removed). Without the scheduled surgery, it would have been hard to tear them away from these bones! The piece of mind that I had after realizing that their best attempts at total destruction did not result in shattering or splintering…well there just is no value you can put on that! 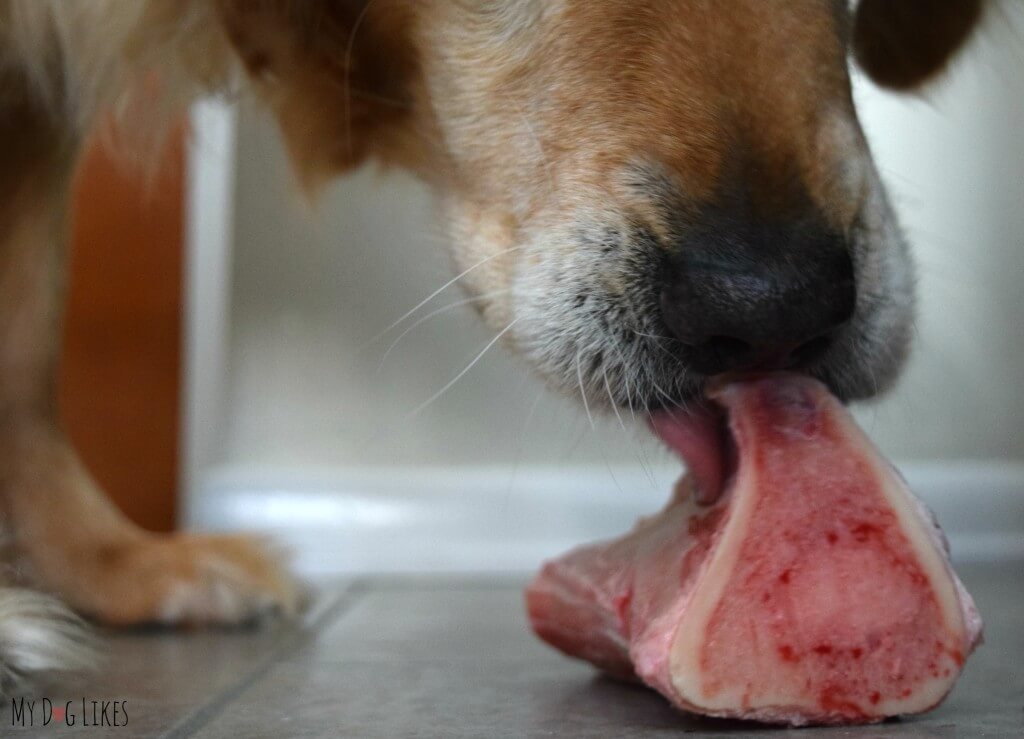 Raw meat and marrow – What dog wouldn’t want to get their paws on one of these? We loved watching them instinctively rip and tear tendons and meat from the bones. Not only does it help to satisfy their retriever desire to chew, but it mentally stimulates them as well as they manipulate their bodies to hold the bones just right to get every last morsel of tendon, meat, and marrow from it. 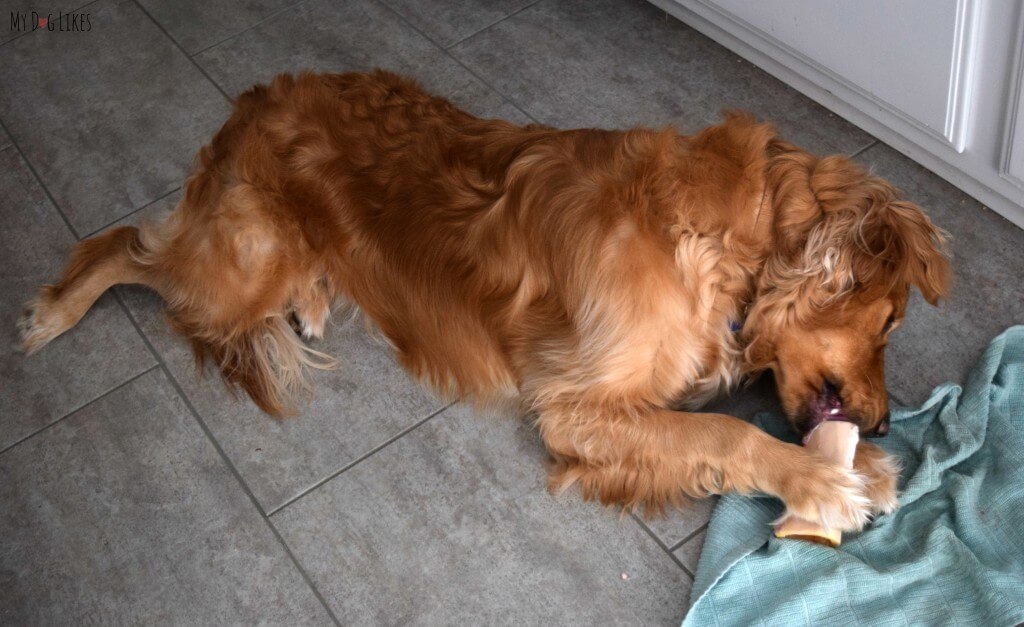 While we were initially concerned about the mess, an easy solution would be to feed outdoors until the initial meat and marrow is stripped from the bone. Or if you are in what feels like the Tundra (Gotta love Western New York winters), feeding on a wipeable floor or with a towel is an easy solution. The towel also helped to keep clean up concentrated to one spot. Bonus points awarded if your dog knows the “place” command which easily redirects them when attempts are made to head to their favorite chew spots like carpet or upholstered surfaces that are not as easy to clean. 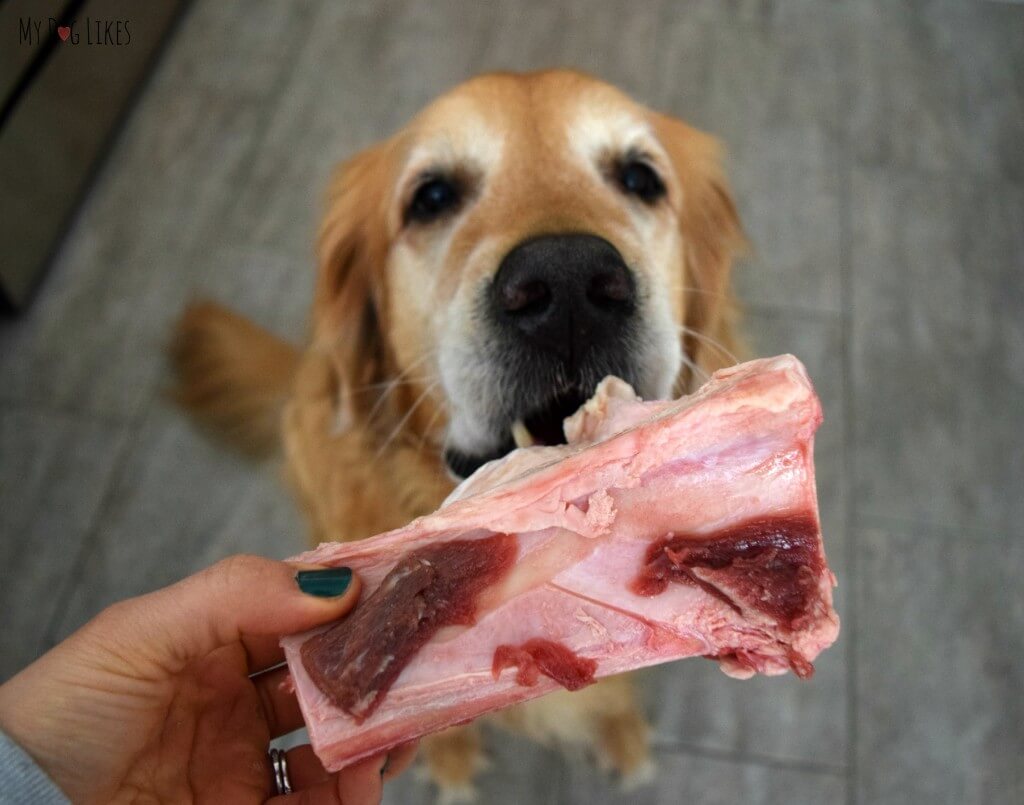 We had absolutely no doubt that the Primal bones would go over well with the boys. What we were looking to see is how the bones themselves stood up to their chewing. We have had some bad experiences with splintering bones in the past, and made sure to keep a close eye on how they were holding up. Nearly 24 hours later with lots of chew time mixed in, the bones were clean, intact, and safe!

Stay tuned as we explore more products in the Primal line and tackle other common questions about raw and BARF dog food diets!

Click Here to Pick up Some Primal Bones on Amazon!