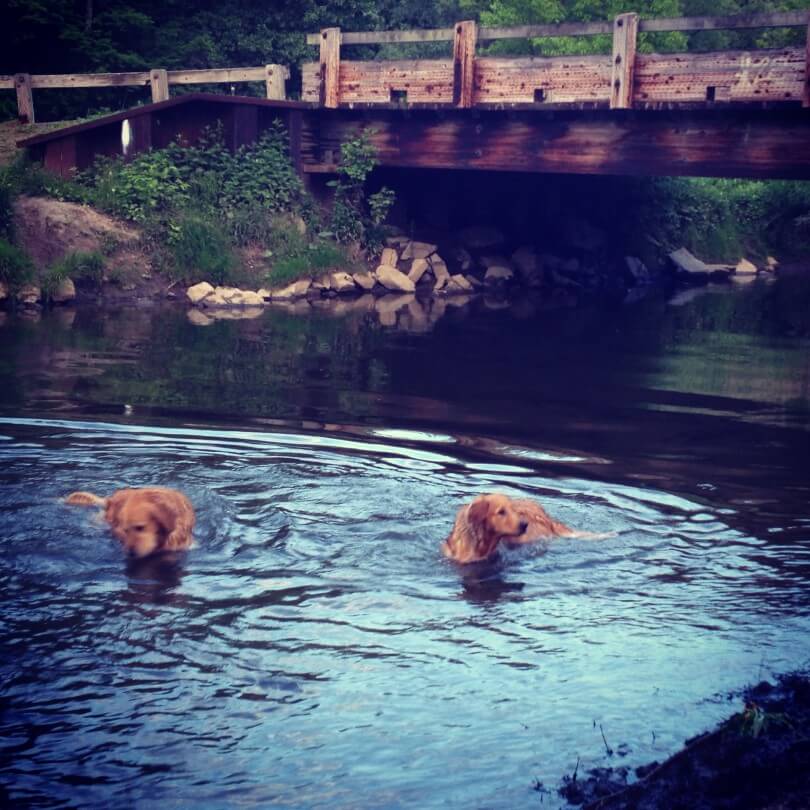 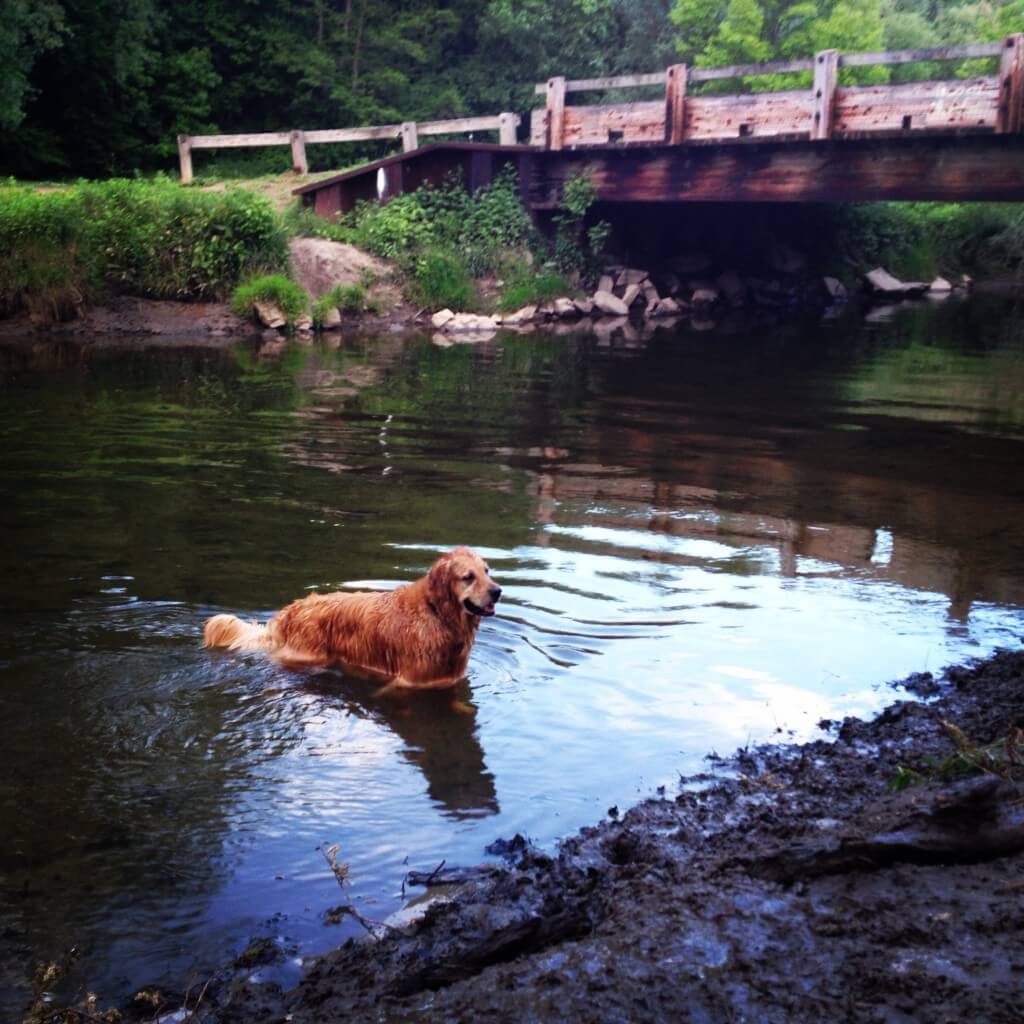 One of the biggest perks of our neighborhood is that we have two parks within walking distance. It was a major selling point for us and we try to take advantage of them as much as we can.  In just a few minutes we can have the dogs hiking trails, swimming in a stream and even frolicking beneath some small waterfalls!  We definitely feel lucky to have this bit of beauty and seclusion so close to home.

So, after a busy (and warm) weekend where we had not yet managed to get the dogs out for a swim we decided to take the pups over to Ellison Park for a quick dip.

Harley is an expert swimmer who could live in the water (and with the thickness of his coat in the summer heat I can understand).  For Charlie, this was only his second time swimming, so it was to be a bit of an adventure!

As usual, when we neared the stream and let Harley off leash, he eagerly trotted into the water.  He quickly got started on his standard rock clearing mission (something he has done every since he was a puppy).  We are used to this but everyone is always amused when he disappears underwater and surfaces with a large object to bring to shore.  Typically by the time we leave any swimming area he has created quite a pile near the shore.  I like to think that he is just trying to protect other dogs from potential paw hazards in the water!

Harley clearing rocks and debris from the stream!

Charlie on the other hand was more hesitant about stepping into this unknown.  It took a bit of coaxing (by tossing some precious sticks) before we were able to get him into the water.  However, after only a minute or two, he was happily running in and out fetching sticks and swimming alongside his big brother. 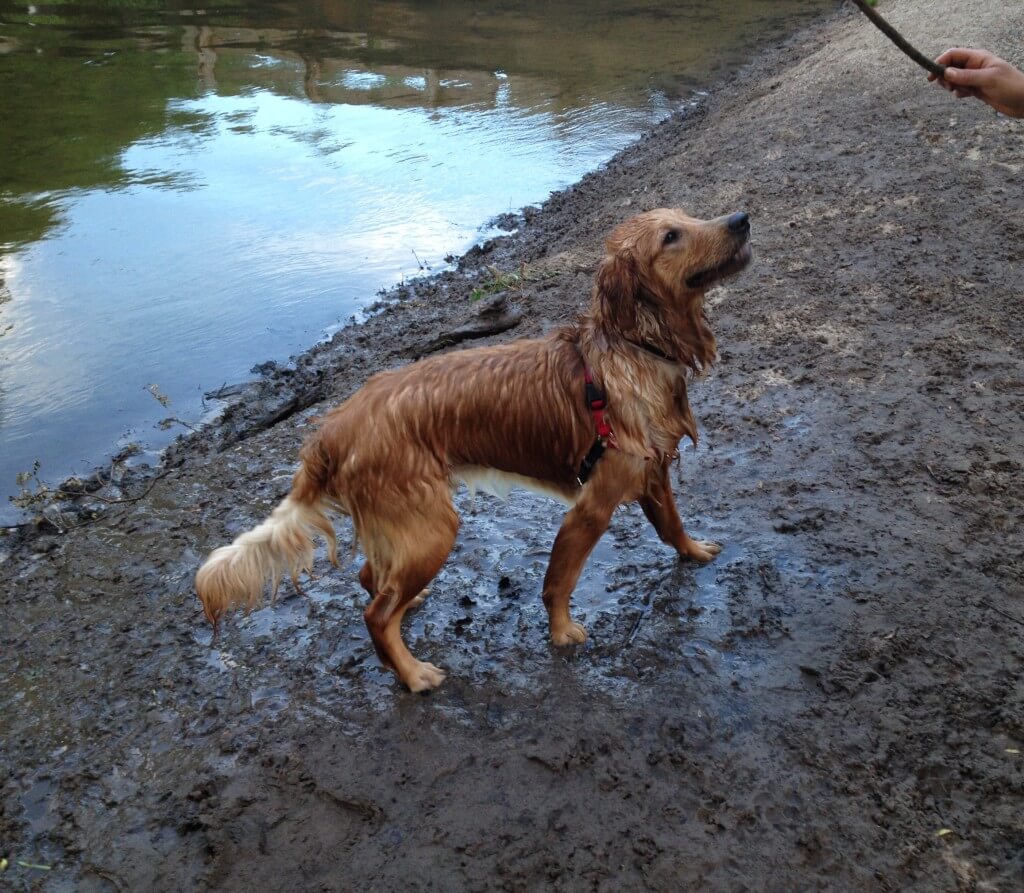 Charlie ready to retrieve. Still yet to master the post swim shake…

In fact, Charlie quickly learned what all of Harley’s friends know – why not let him do all the hard work of swimming and retrieving while waiting to steal the stick near shore? 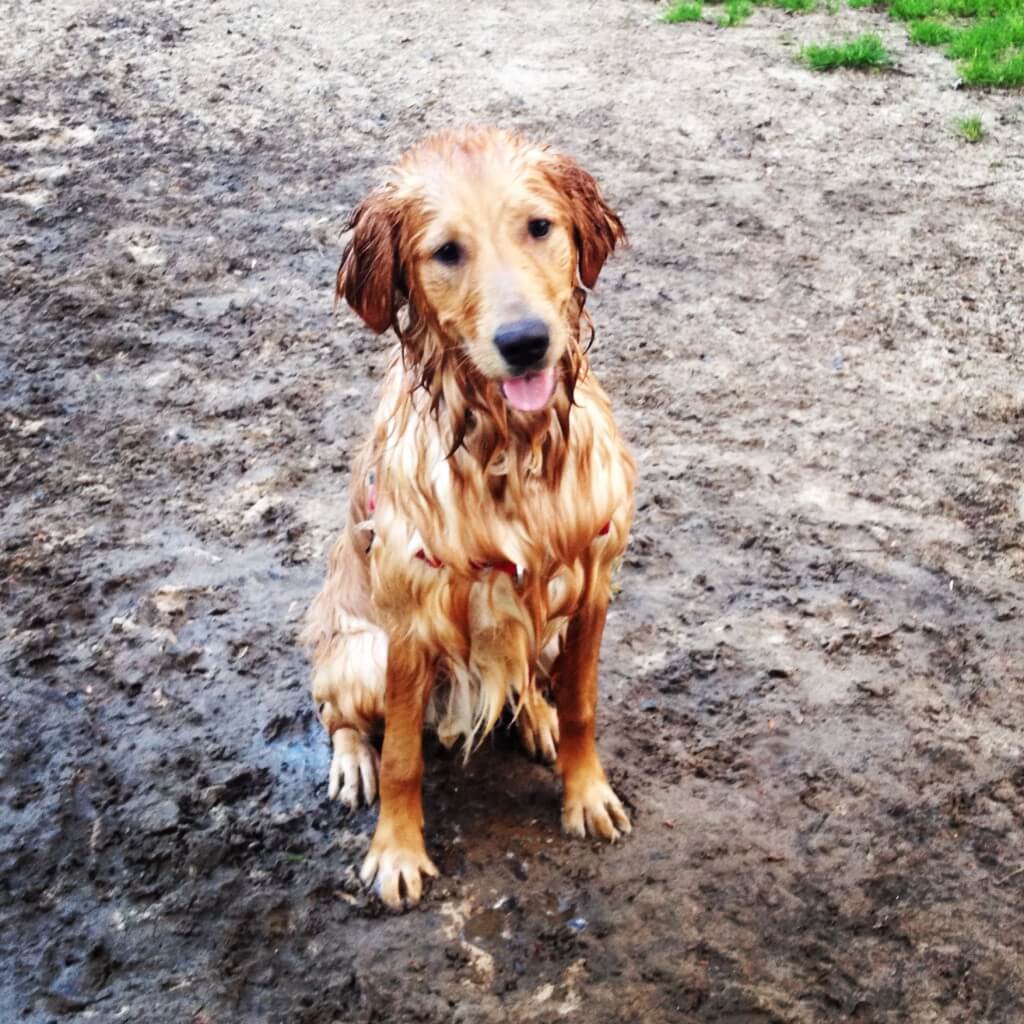 A very happy (and wet) Charlie! 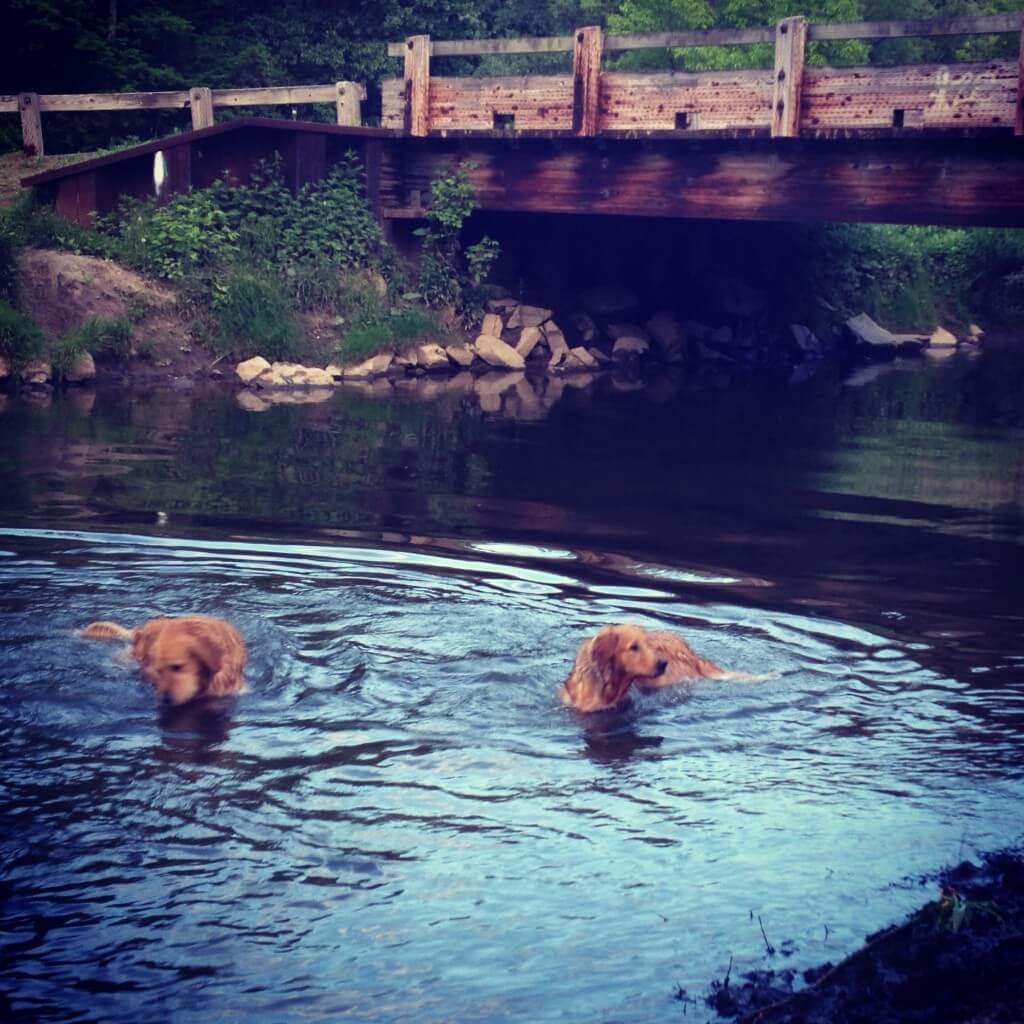 Harley and Charlie enjoying a dip!

Charlie seems to be learning well, although we did have one real scare.  As he was getting tired he started to just tread water out in the middle of the stream.  For a moment he looked like he was starting to struggle and take in some water.  Just before I was about to jump in, he got his feet onto the ground and came into shore.  He did not seem very fazed by the incident but it definitely startled us!  We will be keeping a close eye on him in the water as he clearly does not yet have the stamina of his older brother who could swim for hours!

After the dip we figured we would play some fetch in the grass where they could dry off and Charlie could burn some more of that puppy energy.

While Harley was more interested in taking in the sights and smells of the park, Charlie had a blast chasing after his favorite ball, and we were able to capture some hilarious video!

As you can see he needs a bit of practice on his mouth-eye coordination! 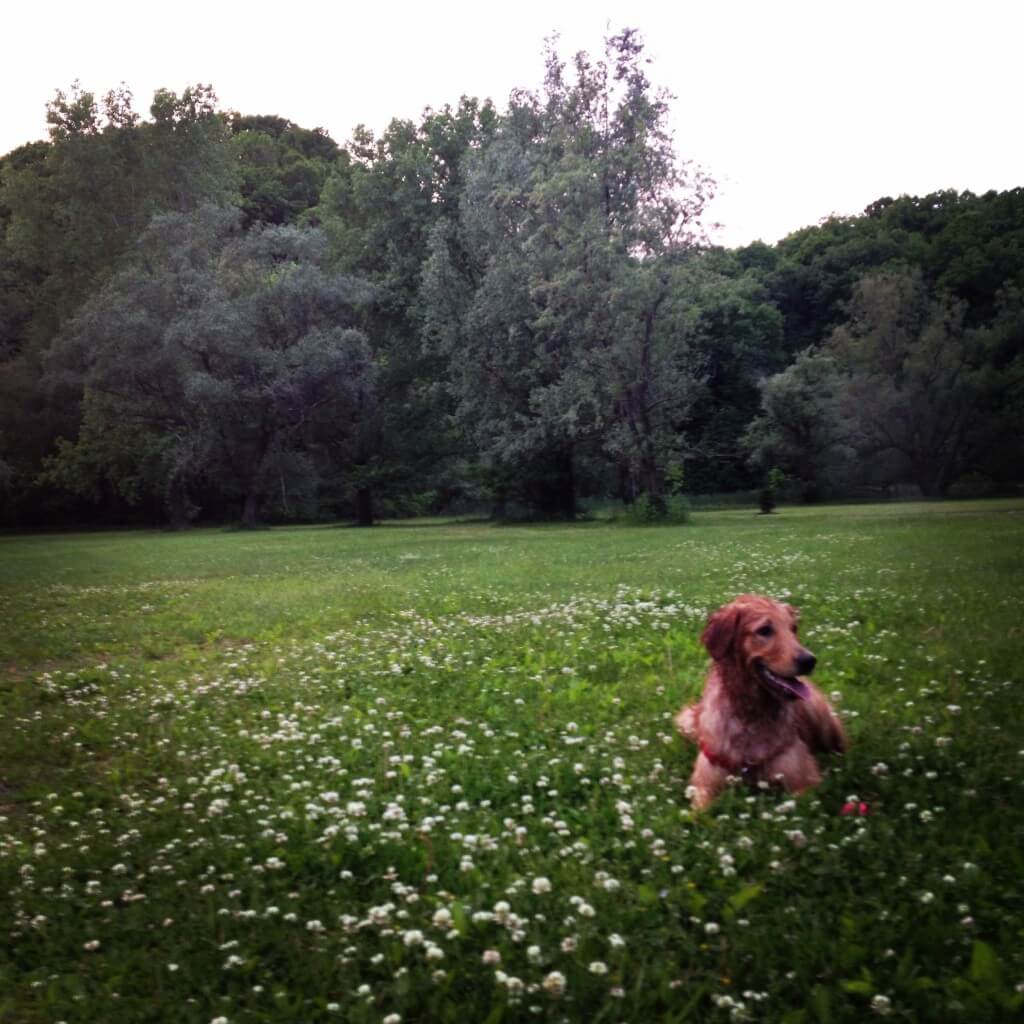 Charlie taking a brief rest in the grass 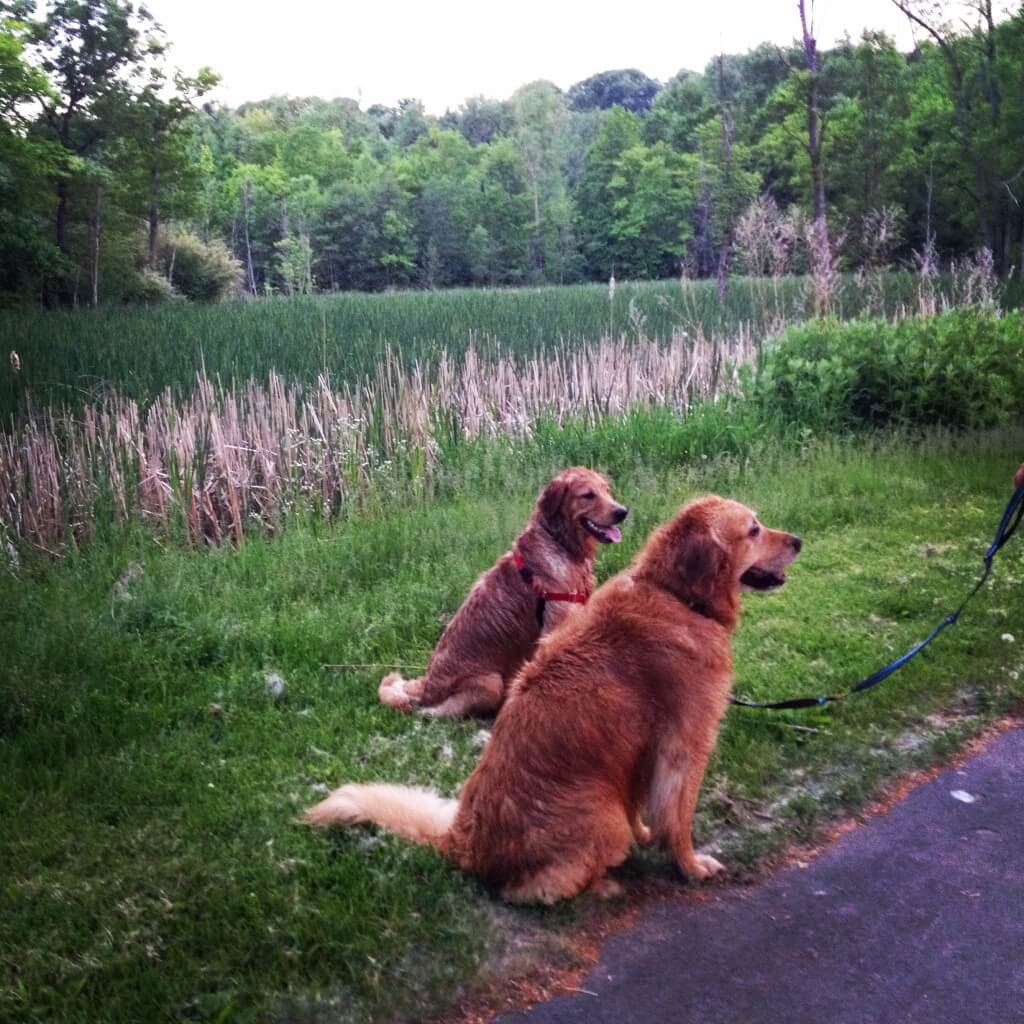 Enjoying the scenery on the way home…

Rach and I had a blast and I think the pups really appreciated the chance to cool off.  Definitely a reminder that it doesn’t have to be a big ordeal, but any time spent with your pets is well worth it for all involved.  What a great way to cap off the weekend!

So what fun did you have with your dogs this weekend?