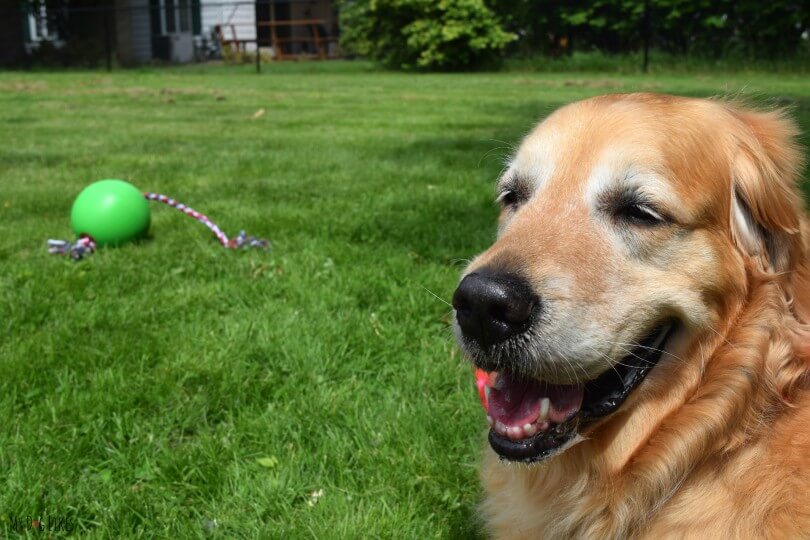 We first introduced you to the Tuggo in a roundup of last years Backer’s Total Pet Expo. This toy had sparked quite the buzz at the show and was being described as seriously tough.

With 2 strong chewers in the house, we made a point to stop at their booth and see what all the fuss was about. There we were able to see one of the dogs at the show doing its best to put the Tuggo through its paces. We also spoke briefly with the inventor, Adam Harrington, who gave us a rundown of its unique features. Unfortunately we were flying home and could not bring one back with us! We reached out to Tuggo a few months back however, and they were kind enough to send us 2 of each size to test out and giveaway to our readers!

Looking for a Tough Dog Toy?

Look no further, you have found it.

Click here to pick up the Tuggo on Amazon

A ball and a rope combined? This idea was the brainchild of Adam – after tons of frustration and lots of wasted money spent on toys and balls that just didn’t hold up! Adam wanted to create a toy that would be resistant to destruction while promoting exercise and building muscle.

What Adam came up with was nothing short of brilliant for high energy, active dogs. This innovation even went on to win the 2014 PetSmart Innovation Station award! To understand what makes the Tuggo special, we will break down it’s features one by one.

The Tuggo ball is constructed of an extremely durable plastic that will withstand abuse from even the toughest and most persistent dogs. Like we shared before, we saw the Tuggo being used and abused first hand by a very high energy dog at Backer’s Total Pet Expo. This ray of sunshine pulled, pounced, clawed, chewed, and scratched at this thing for hours. The results, nothing more than a few surface scratches! WOW! 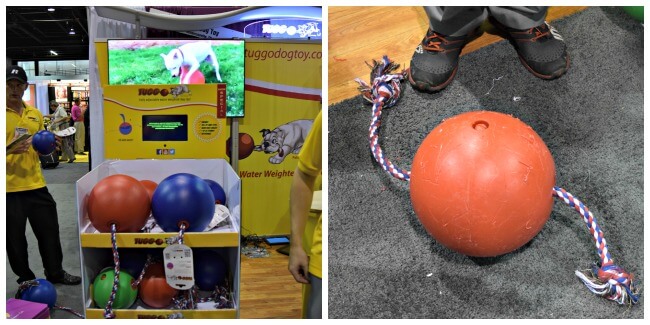 Still skeptical? Check out this video of lions playing with the Tuggo!

In our house, ropes are not typically considered a “durable” toy. If left unattended Harley would EAT, yes I said eat, an entire rope. Certainly this toy is not designed to be left with your dog to eat, but depending on the intensity of play, your rope may begin to fray over time. Fear not, simply order a replacement for $5 on their website and you are back in business! No need to buy a whole unit!

Without a doubt, the most unique feature of the Tuggo is that it can be filled with water. In fact, up to 20 pounds of water weight can be added to the Tuggo, providing additional resistance and exercise to playtime. The water works double duty, giving your dog a workout while also adding a fun element to play. The sound of the water splashing around inside will entice your dog as well as cause the ball to move unpredictably. 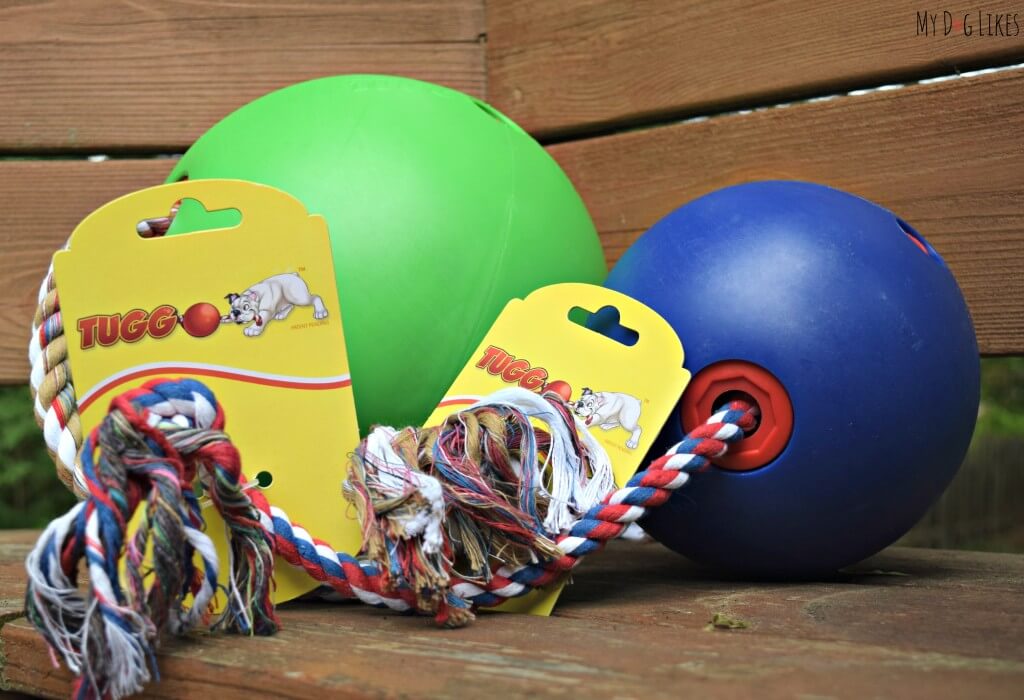 For super high energy and strong dogs, Tuggo suggest adding sand or gravel to provide even more resistance and weight. If your dog is still looking for a challenge after that, I think you actually have a Lion, in which case-watch the video above again. 🙂

Adding water, sand, or gravel to the ball is easy. Simply use a screwdriver or some other strong flat object (a pocket knife and garden spade both worked for me) to unscrew the recessed plug and pour in. Play around by adding different amounts of water to see what your dog likes best.  We tried it full, with just a little bit of water, and empty as a fetch toy! While it may seem like  a pain to have to get a screwdriver to open this thing up, we really liked that the cap was recessed and could not be accessed by the dogs. As anyone with a tough chewer knows, if there is a spot of vulnerability, the toy is good as gone!

There are many ways to play with the Tuggo. With the built in rope, it was designed to be used in human-dog AND dog-dog tug of war games. This rope is free to be pulled back and forth, yet is knotted at the ends to keep it attached. The motion of the rope sliding in and out creates some very interesting movement during play. The easy to grab rope also makes it great for fetch and the tough ball ideal for pouncing and batting. Leave the Tuggo empty and if floats, making it just as much fun in lakes and ponds! 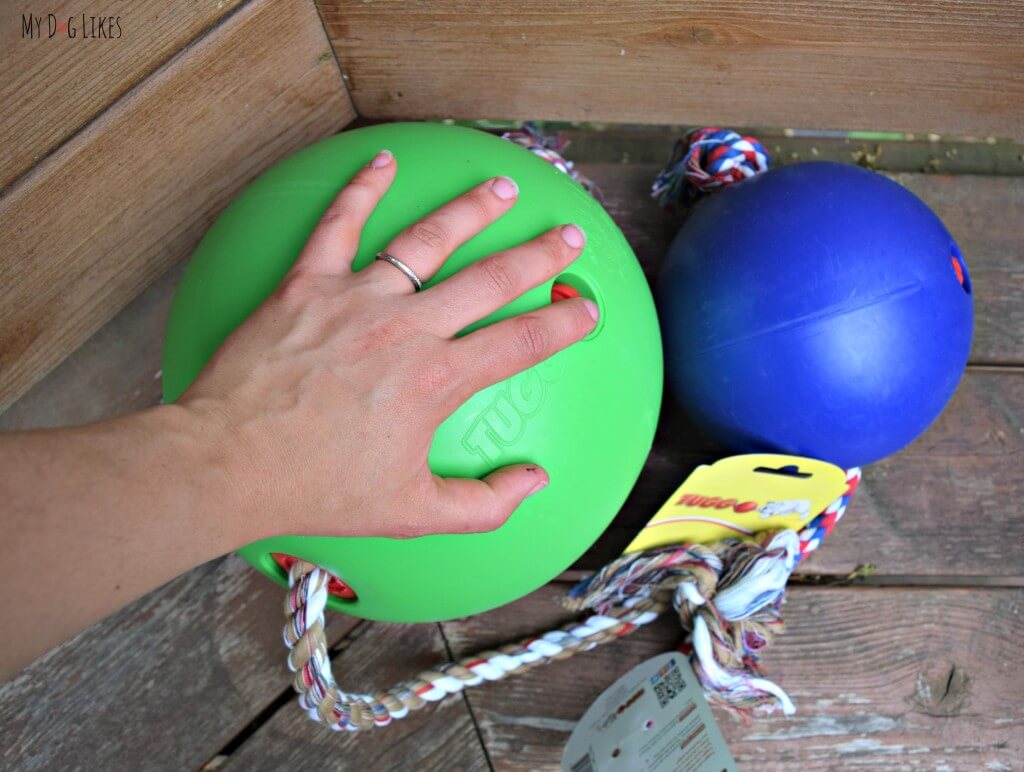 The Tuggo comes in 2 sizes, 10in/7in diameters, and multiple colors. For solo play, I liked the larger size because the volume of water (in our case) was enough to provide resistance. For Dog-Dog or Dog-Human play I liked the smaller size because it was a little more manageable and less like a wrecking ball! Deciding which size is right for you should come down to how your dog likes to play. If you think that your dog will be rough and relentless, go for the larger size. If your dog likes to tug and fetch it exclusively, I think the smaller size is perfect for many.

Putting it to the test – Our Tuggo Dog Toy Review!

As we have explained before, Harley is not one to play with toys – If it is not a stuffie he isn’t interested! While Charlie is always game to play with a new toy, we thought that the Tuggo would really shine in a group environment. 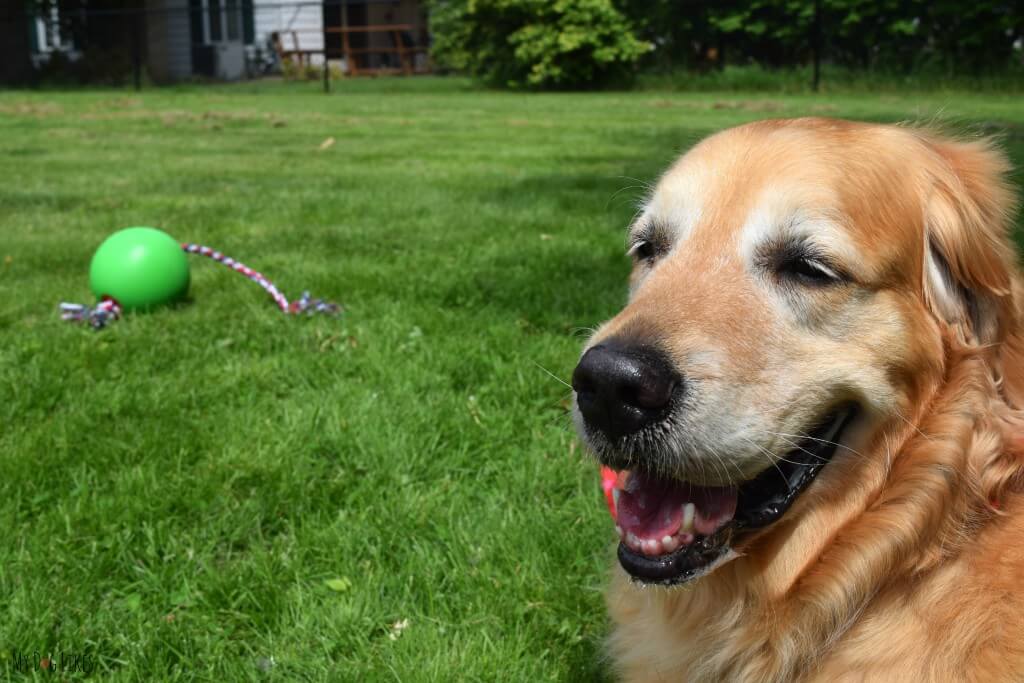 Calling in the reinforcements…

We brought the boys and the Tuggo over to play with their best dog friends Laila and Meera. These rambunctious Lab sisters could surely help us see what it is made of!

At first sniff, everyone was interested as I filled up the Tuggo. I started by filling it all the way up with water, under the assumption that after some play I would dump some out until I found the perfect amount. I rolled it over the ground (like a bowling ball) and the chase was on. 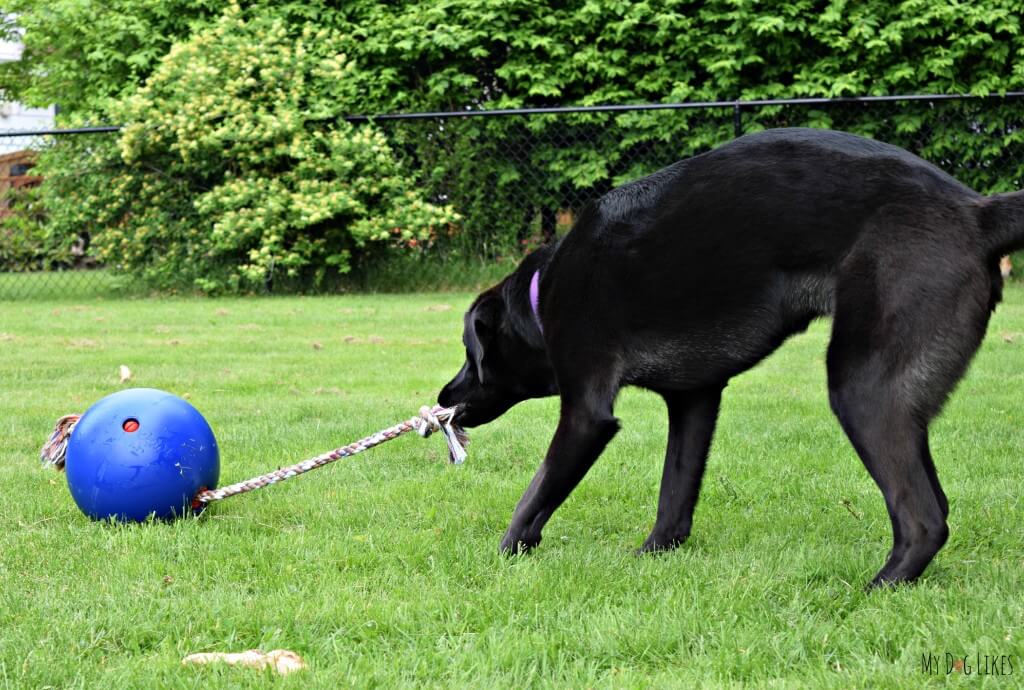 Laila took off (I know, I was surprised to see the old girl run after it too), and was the first of the dogs interested in checking it out. A few pulls on the rope was all she needed to realize that this was too much work for a distinguished lady to sustain. In hindsight, I realize that I filled it too high and it was too heavy for the energy level of our group. 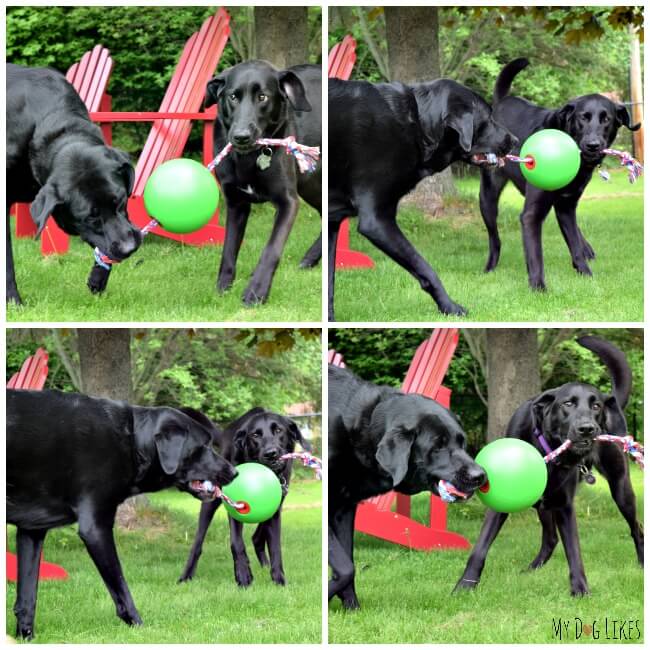 I decided  to start over and use the smaller size to entice play. Soon enough the girls were involved in an adorable game of tug o’war. Charlie of course could not be left out of the action, and he was all on board for a game of fetch. I’ve shared with you that Charlie can be a bit skittish of new things, but with a little bit of time he seemed to get used to the unpredictable bounces and sloshing noises that it made. 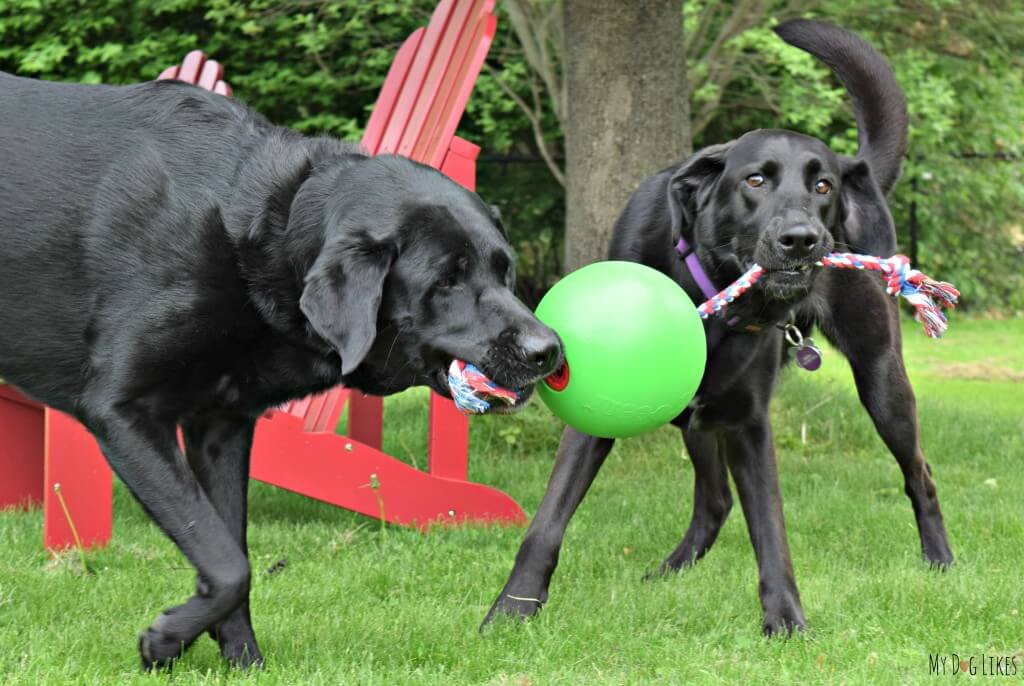 After a few minutes of fetch, Charlie got distracted by his BFF and a wrestling match ensued! Could these two be any cuter? 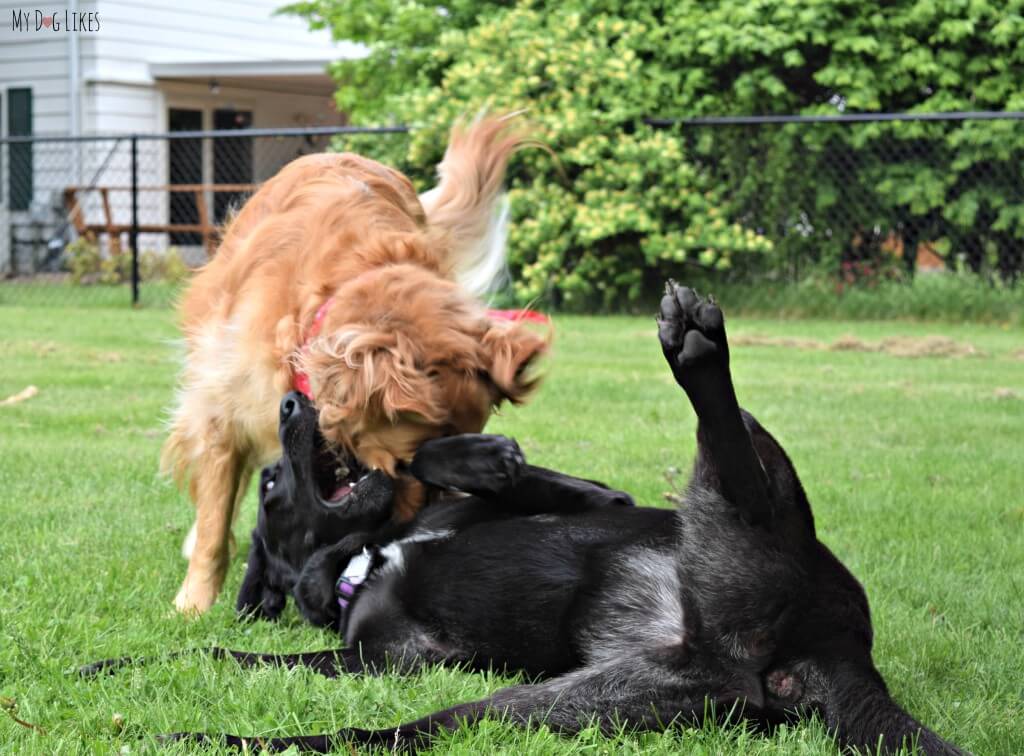 How many times have you heard that a toy is “indestructible” only to be disappointed in mere minutes? This frustration was a huge reason for us creating this site in the first place! We feel very confident saying that this is one of the toughest dog toys around. I simply cannot imagine a dog doing serious damage to the hard plastic of this toy.

What about the rope? Worried that your dog will settle in and chew it to shreds? Well, if so, no big deal because the Tuggo was cleverly designed to allow the rope to be replaced without having to purchase an entire unit. 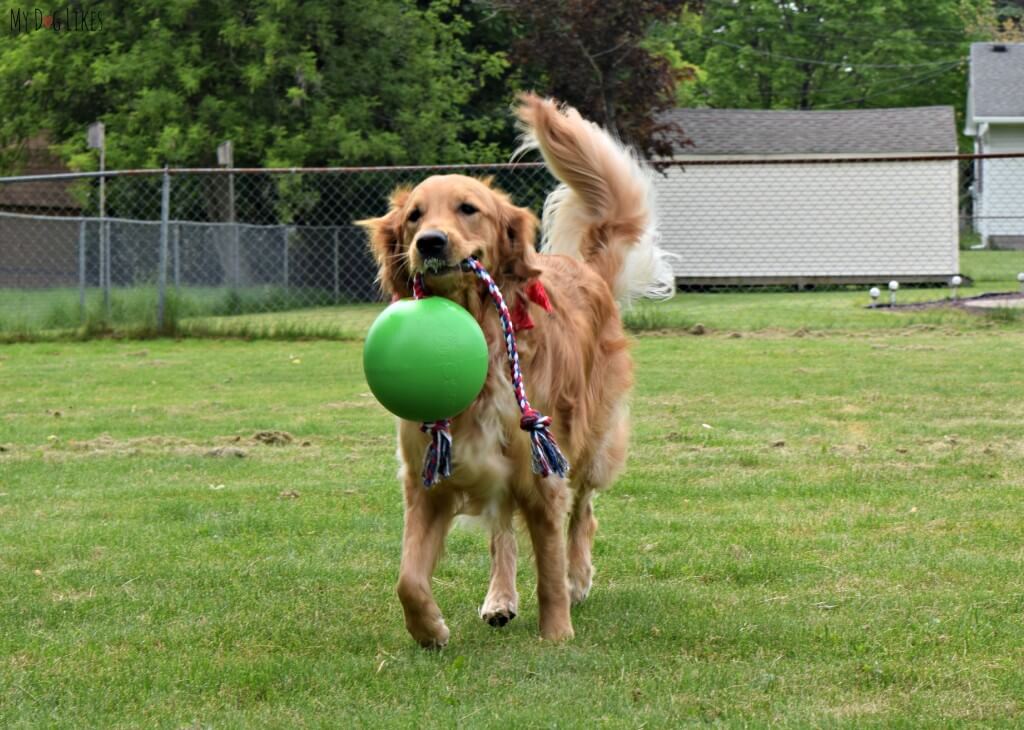 Charlie would play fetch for hours with the smaller sized Tuggo ball, but I think this toy really shines with high energy dogs who love to pounce, roll, scratch, and attack it! Our boys weren’t the best fit for the larger version of this toy because that is not their play style, but there are very many dogs out there who would get hours of entertainment from this durable tough toy. We would recommend this toy for dogs with lots of energy to burn without hesitation or as a typical fetch toy for your average dog who just loves to retrieve!

Interested in seeing if you dog has what it takes to tackle the Tuggo?

Click here to pick up a Tuggo on Amazon

You can also now buy Tuggo at your local PetSmart!