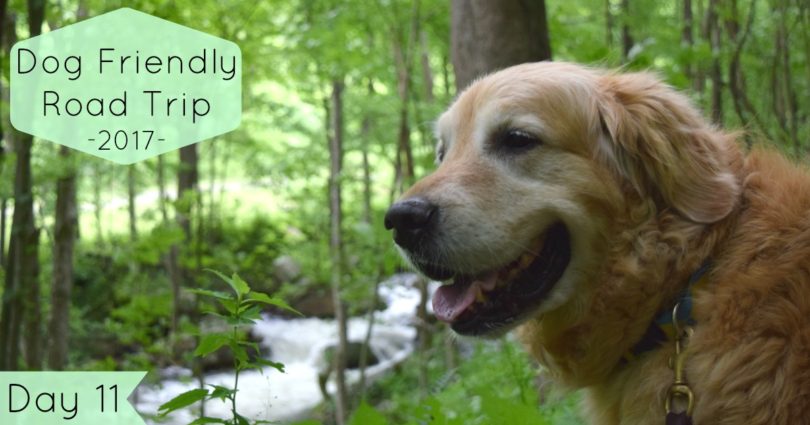 Believe it or not, day 11 or our road trip began with a bit of sunshine!

Not wanted to miss our chance to get outside, we scarfed down a quick breakfast in our hotel room, while looking for some hiking near Blacksburg VA. Whenever we are looking for somewhere to explore in a new area, there are 3 sites that we typically reference – Tripadvisor, Yelp and Alltrails.

After a quick search it was clear that the unanimous recommendation was Cascade Falls, whose major attraction is a 66 ft. waterfall which plunges into a large pool surrounded by 200 ft. cliffs!

Cascade Falls is located near Pembroke, VA which is only about a 30 minute drive from where we were staying in Christiansburg.  The trail was described as being a relatively flat 4-5 mile round trip – which sounded perfect for our crew.

Unfortunately, when we arrived at the park we were met with a large road closed sign!

All this rain we’d been seeing was taking its toll, and Little Stony Creek was running high and fast. So much so that it was washing over some of the paths making them unsafe to travel on! We learned from some locals that this is not an uncommon occurrence and there is actually a sign at the beginning of the road signaling whether the park is open or closed. (Too bad that our GPS had directed us onto the entrance road by cutting off the corner!)

We just couldn’t catch a break with this weather… even on a dry day, the rain was causing problems!

Since we were back to the drawing board, I parked at a nearby gas station to figure out what to do. Rach found a series of trails in the nearby town of Narrow’s that sounded pretty good, so we decided to head on over and check it out. 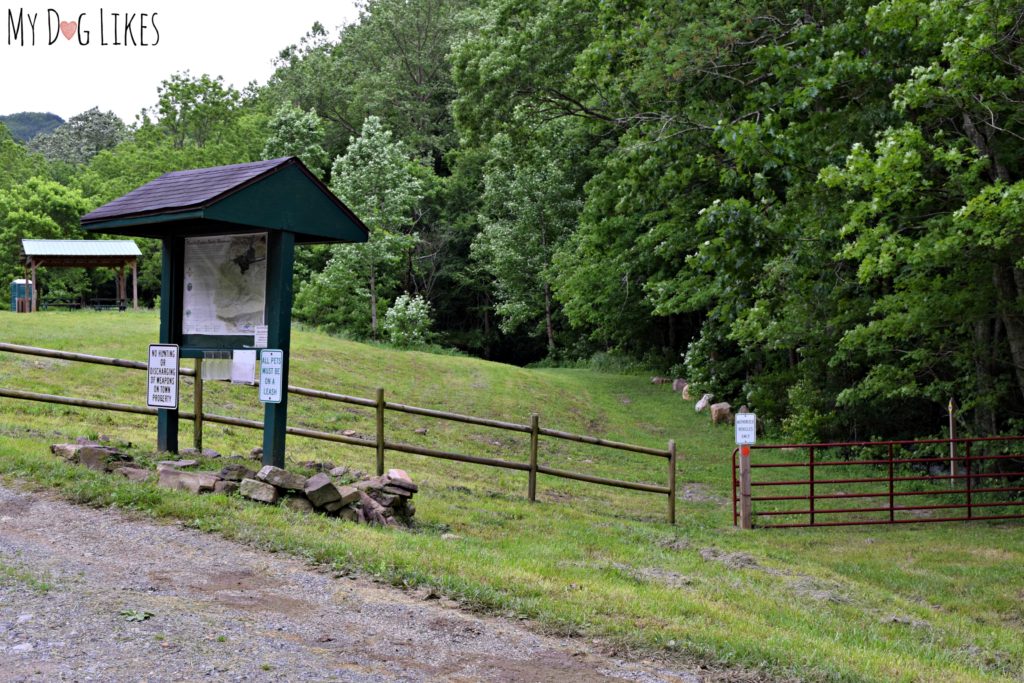 Mill Creek Nature Park comprises 145 acres near the West Virginia border and is accessed via a narrow residential road. This street (Northview) transitions to gravel when passing through a small gate and opens up into a small parking lot on the left. We were the only people there when we arrived and it actually remained that way throughout the course of our entire visit!

We started off hiking what is known as the Lower Loop Trail which we later realized is actually not shown on the posted trail map at all – though it is the most obvious pathway from the parking lot! To access, head through the gap in the fence in the photo above. 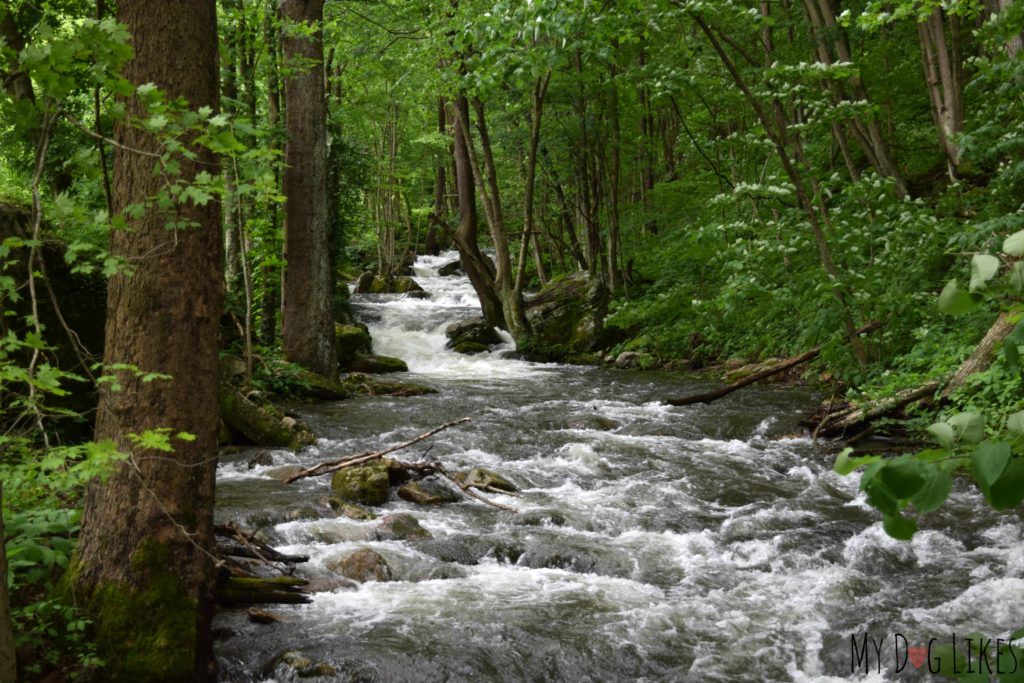 This trail leads you across Mill Creek via a wooden footbridge and runs along the water for about a 1/4 mile before heading up the hill. Though the face itself is quite steep, the grade of the path is very gradual, taking you through a series of switchbacks. 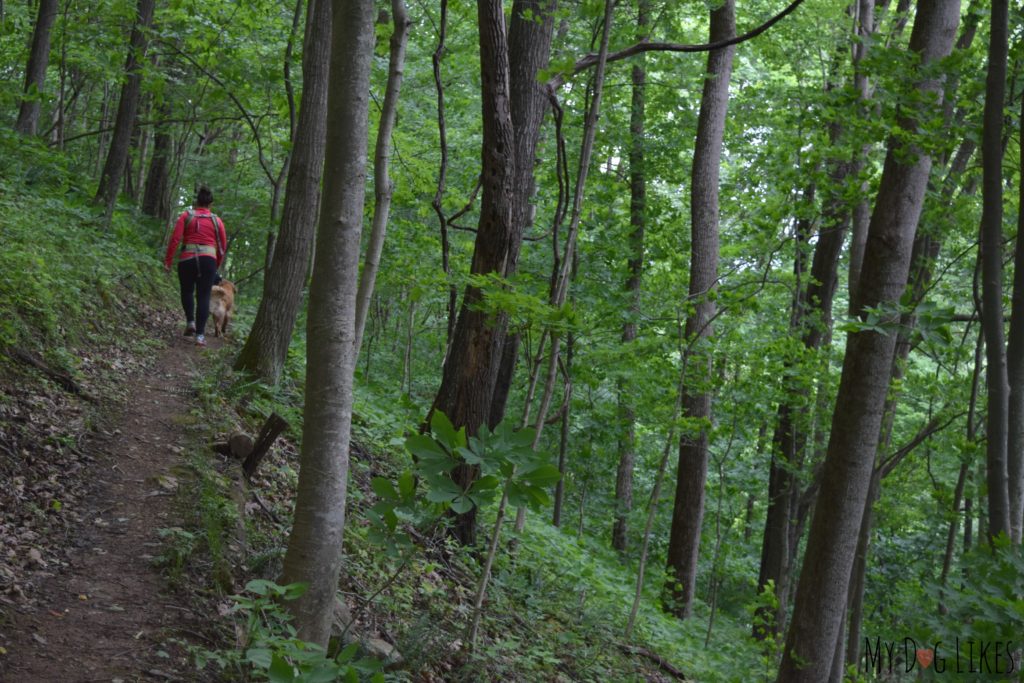 As you near the highest point, there is a option to extend your hike by taking the Upper Loop trail. We passed it by, not knowing where it would take us or how far out of the way, but it turns that it makes a 1 mile loop returning to the exact same spot. Had we known, this would have been a great little addition to our hike! 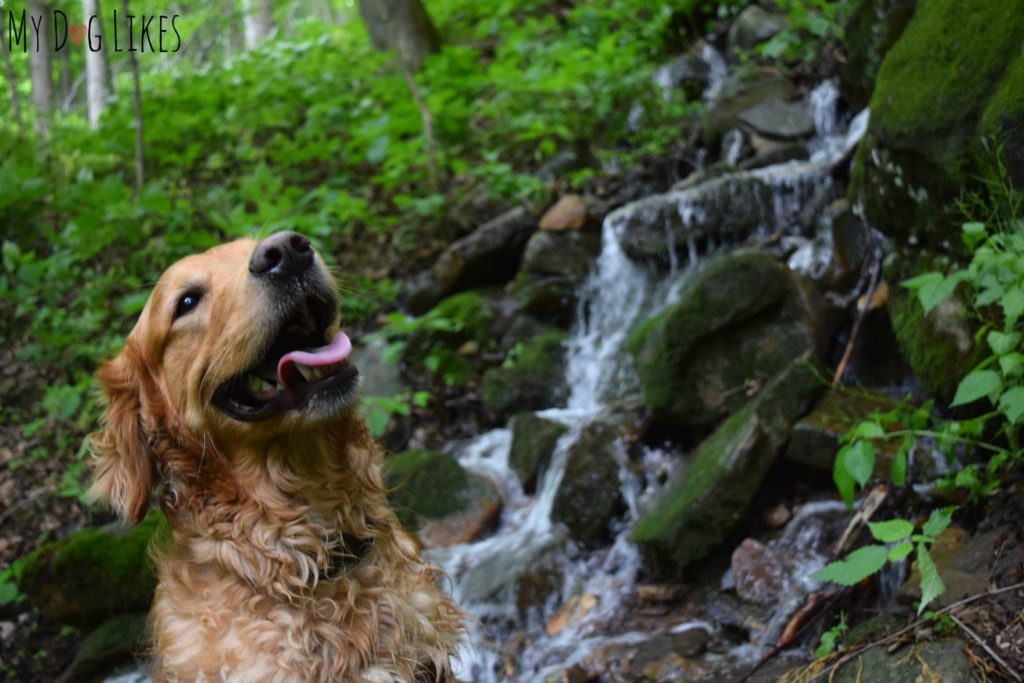 We continued on the Lower Loop back down the hill until reaching the footbridge once again – which took about 30 minutes in total. Though short, we really enjoyed the serenity of this trail. We were completely alone and the rush of the water was very relaxing. The boys didn’t mind getting to wade around a bit as well! 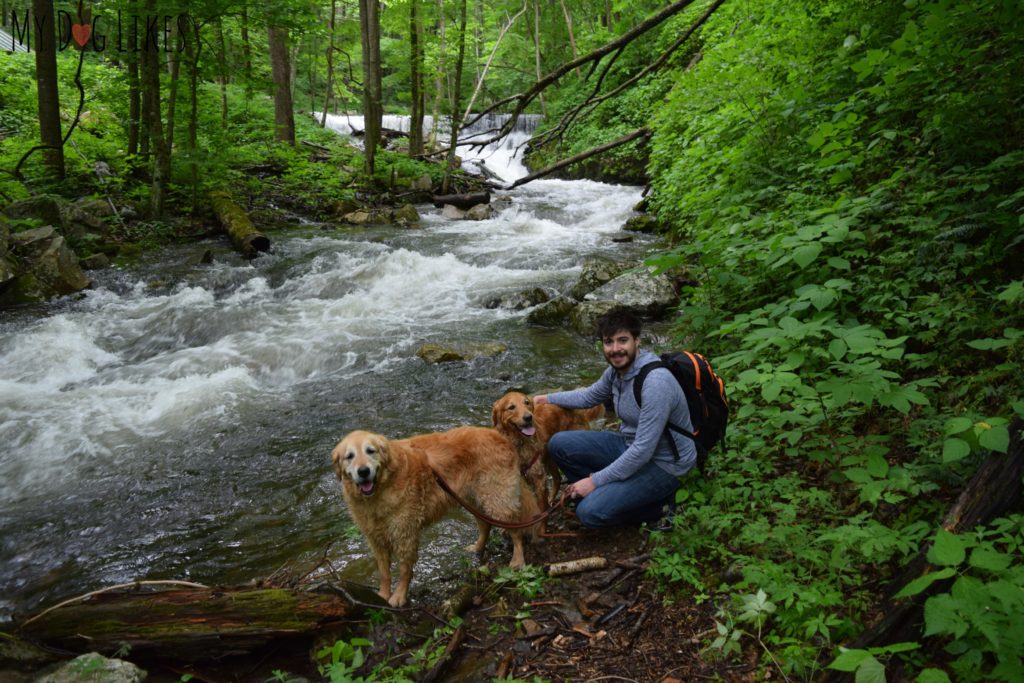 Wanting to get some more distance in, we took a closer look at the trail sign when we returned to the parking lot and it is then that we realized that what we had just hiked was not even depicted on the map! 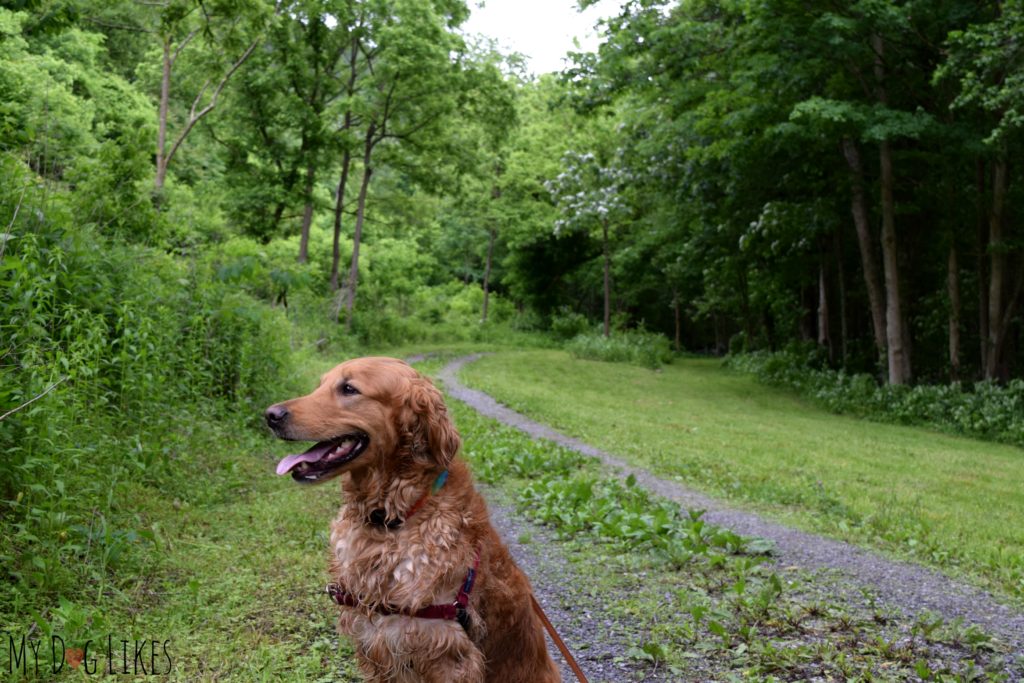 We decided to make our way up Butternut (or what we thought was Butternut, since the start of the trails are not labeled whatsoever!) to see some more of the park. Follow the gravel tracks to get started on this trail, which will eventually lead to a wooded pathway and head up Pearis Mountain. 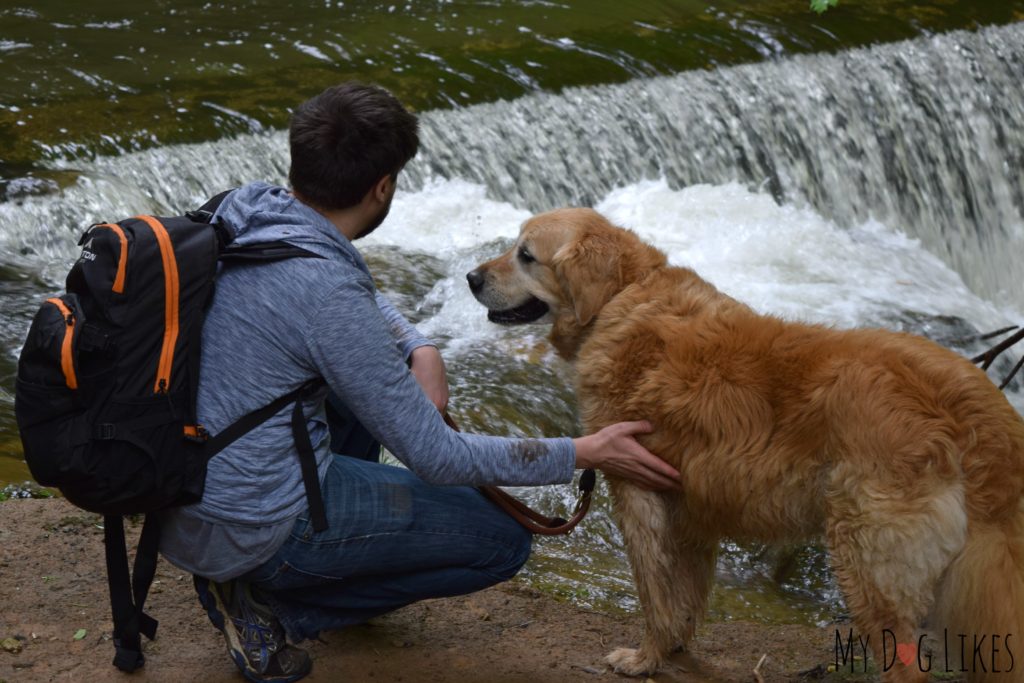 From this trail you get some gorgeous views of the Creek (from the opposite side as before) and also a few opportunities to get up close and personal. 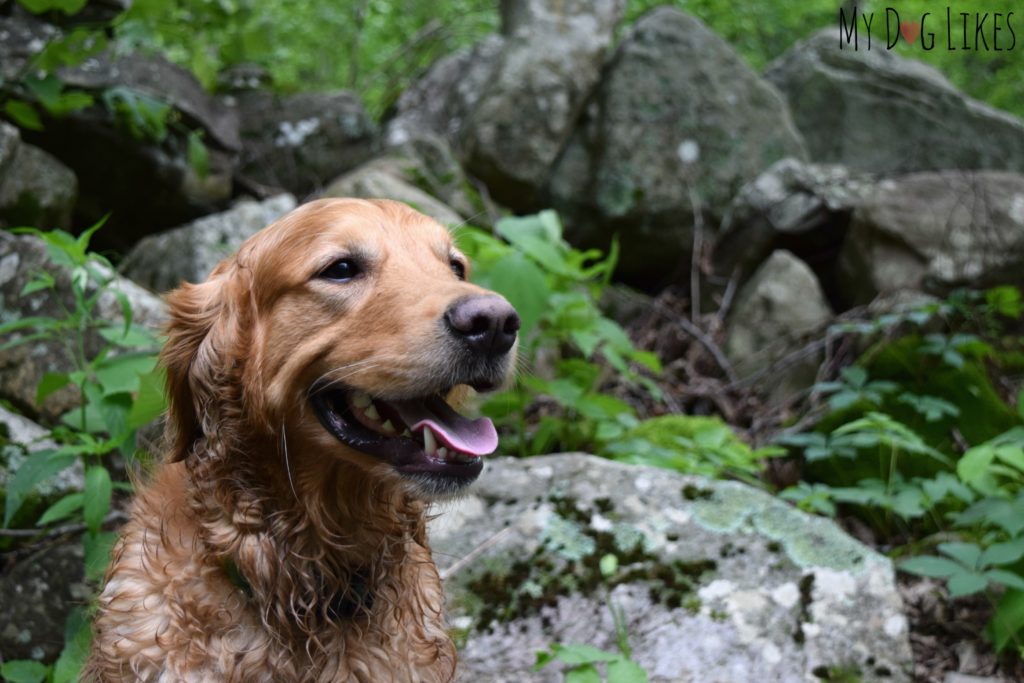 After less than a mile, you will have the option to continue on Butternut, or instead take the Waterfall and Catwalk trails. According to the map they are difficult, but give you a great view of the waterfalls along Mill Creek. We decided to give the Waterfall Trail a try, but did not make it very far! 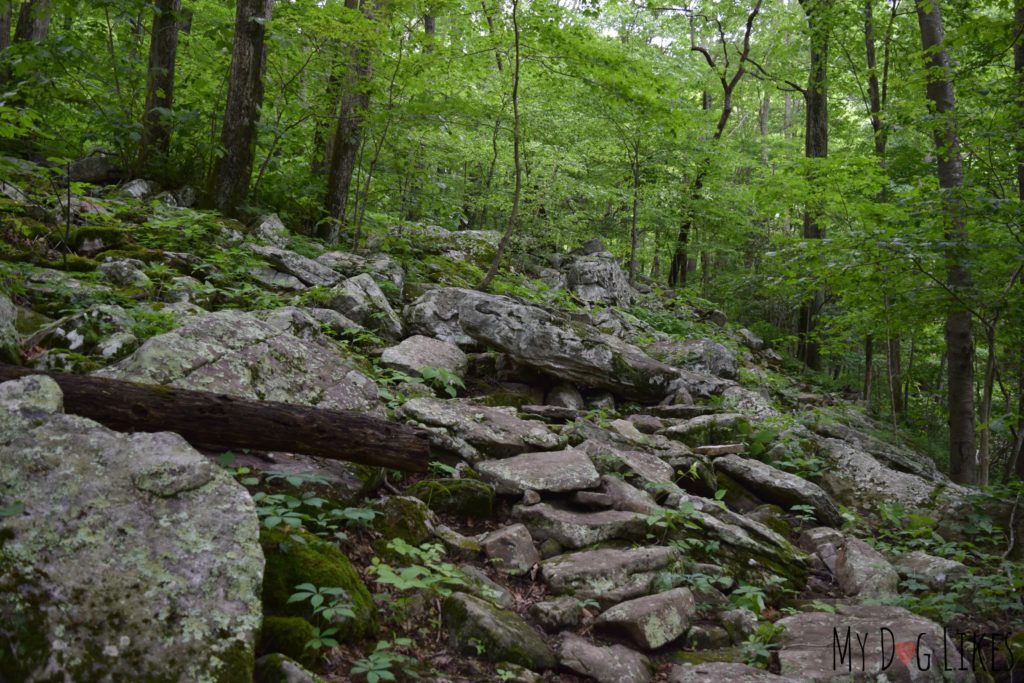 The nice clean pathway turned to a rock garden relatively quickly and it became apparent that this was not ideal for dogs! All those cracks and crevasses were just begging for a twisted/ broken ankle which was the last thing we needed!

We headed back down and took our time along the way, once again enjoying the solitude of the afternoon. Turning back when we did ended up being a really great decision as we made it to the car just as the rain started once again!

Since it was already mid-afternoon, and we were tired from the last few days of hiking, we decided to call it a day and head back to the hotel to relax!

Mills Creek Nature Park ended up being just what we were looking for and was a great surprise on a day that was looking a bit iffy for a while!

Tomorrow we make our way to Charlottesville, VA and check out Natural Bridge State Park along the way!