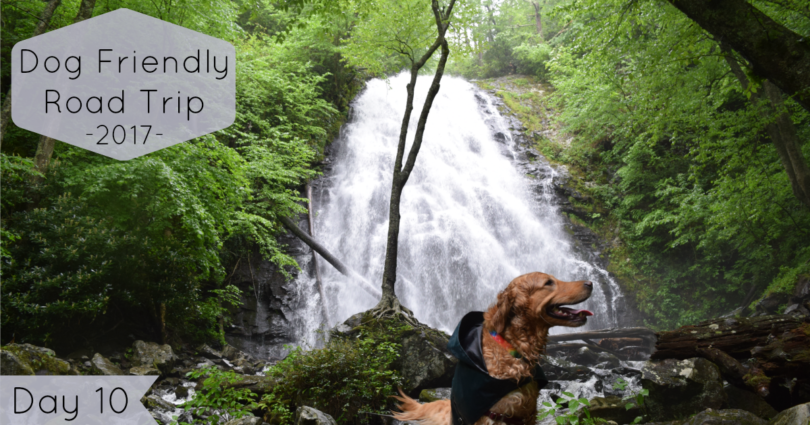 Though we were sad to leave the Green Mountain Chalet behind, we knew the boys were itching to get out hiking again!

Our main objective for the day was making our way up to Christiansburg, VA – and we would be taking the scenic route along the Blue Ridge Parkway. Though this would add  several hours to the trip, we were very excited to check out the views and explore a few dog friendly trails along the way.

Hurray! I was able to get my first frisbee throw in over a week with my new Zisc by @westpawdesign ! Vacation is awesome but man was I excited to get some off leash time at my @glampinghubpets site! #mydoglikesamerica #sponsored

We packed up as quickly as we could (which is admittedly not that fast these days), let Charlie enjoy a bit of frisbee time, and hit the road.

This roadway follows along the ridge of the Blue Ridge Mountains and is truly a marvel of modern engineering. Construction began in the 1930s and though it was mostly completed in the 1960’s one stretch was not finished until 1987. As soon as you start driving you can see why it took so long and what an amazing achievement it is!

Endless twists and turns make this a drivers dream, and the sharp drops on either side of the roadway will keep you on the edge of your seat!

We knew when we woke up that there was rain in the forecast (big surprise) but it looked like there would be a couple of gaps throughout the day. We had several hikes picked out along the way so figured we would see how the weather held up when we were close and play it by ear.

What we did not realize however, was just how thick the fog would get once we got a bit higher in elevation…. 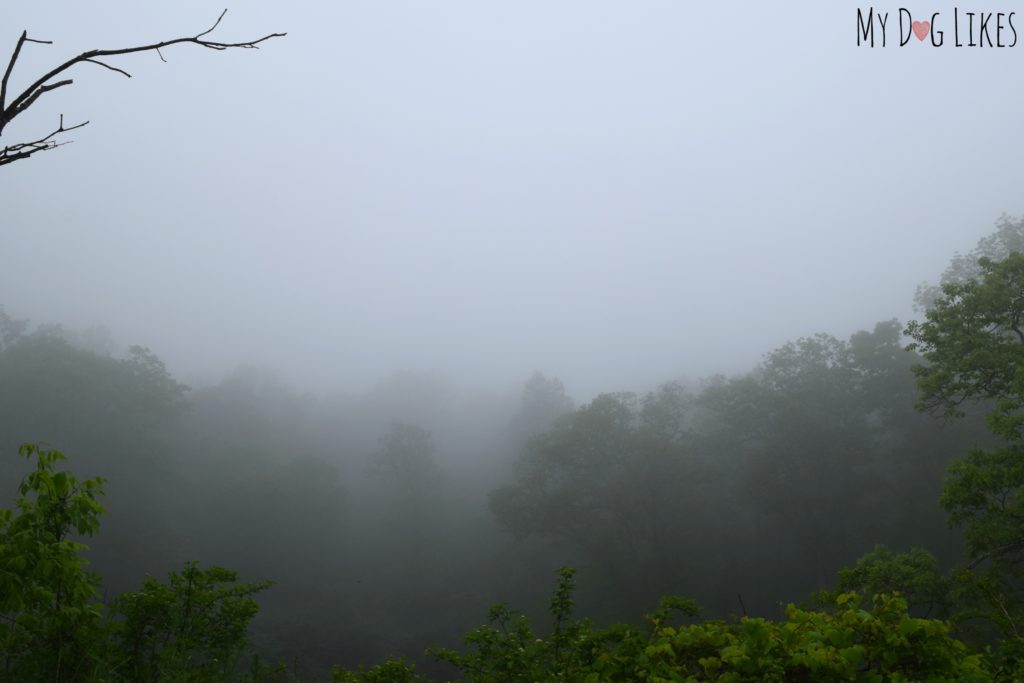 Above is what ended up being one of the CLEAREST views off the Parkway that we had all day. The visibility was limited to only 100 feet or so, so all those stunning panoramic views we read about remained hidden.

To say it was a disappointment would be an understatement! ☹️  Nonetheless, we kept on driving hoping for a break in the weather…

The first hiking spot on our agenda was Crabtree Falls, outside the village of Little Switzerland. Though it was pouring at this point, I decided that I wasn’t going to let the weather ruin the day completely, and check it out regardless.

Charlie and I would head out while Rach, Harley, and the baby kept dry in the car! 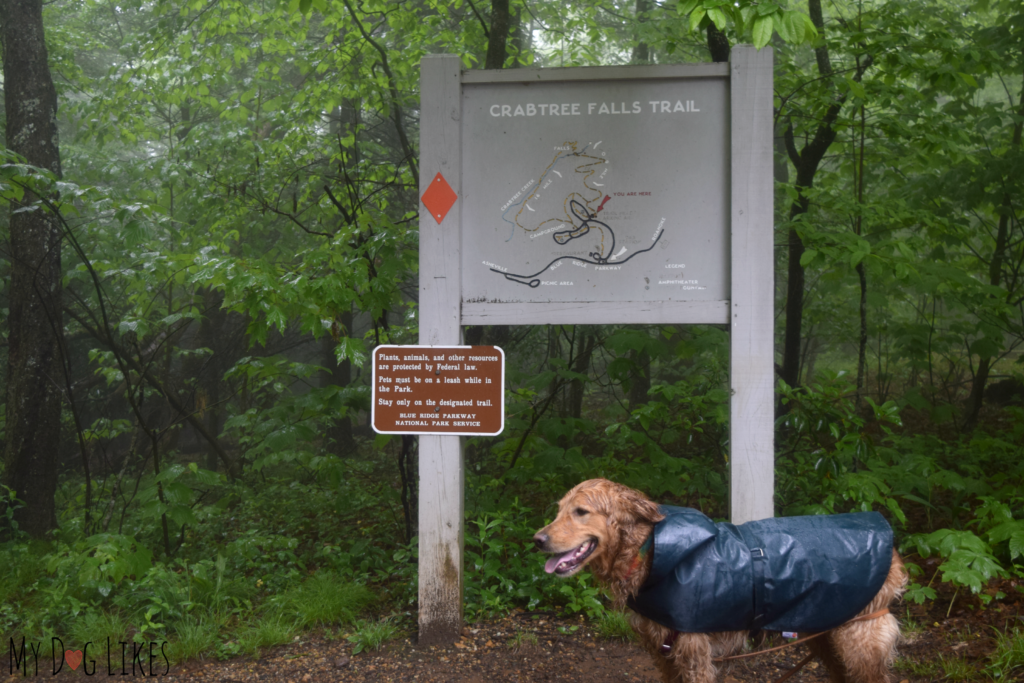 According to the trail map, it was a little under a mile to the Falls, so I figured Charlie and I could tackle it in no time.

As it turns out the trail is quite strenuous – this was compounded by the fact that we were practically jogging! There is about a 650 ft elevation drop from the parking lot down to the Falls, which doesn’t sound like much, but boy can you feel it! 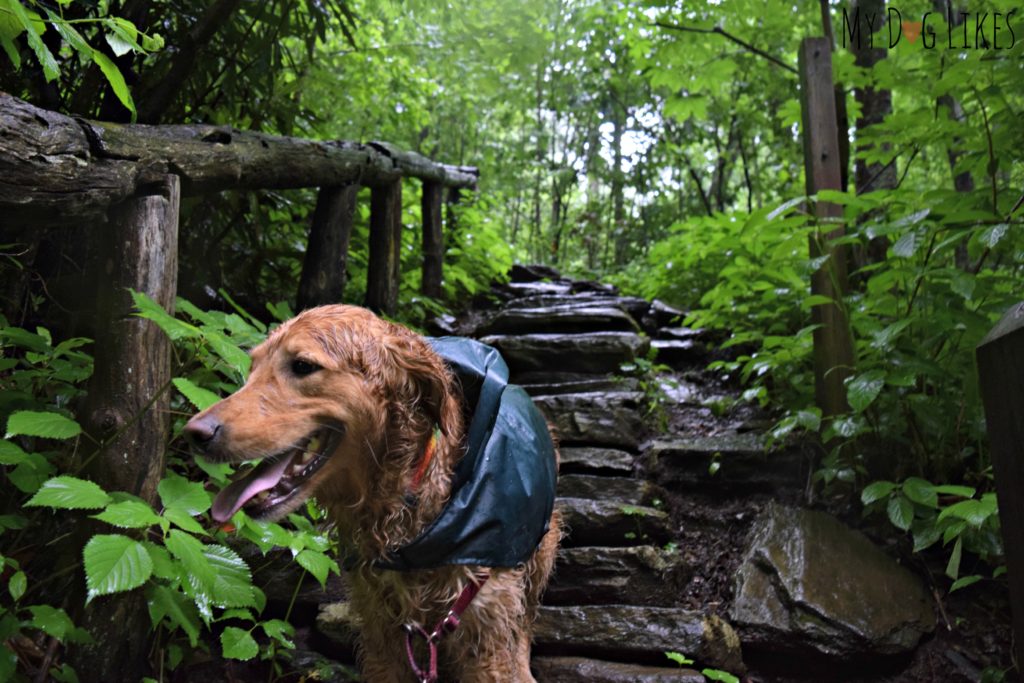 The pathway is well constructed but full of narrow stairs and rocky beds which were flowing with water from all the recent rain.

The further we ventured the more happy I was that I had decided to bring Charlie along on this hike. It would have been a lot for Harley on a regular day – and there is no way he could have kept upset our pace. 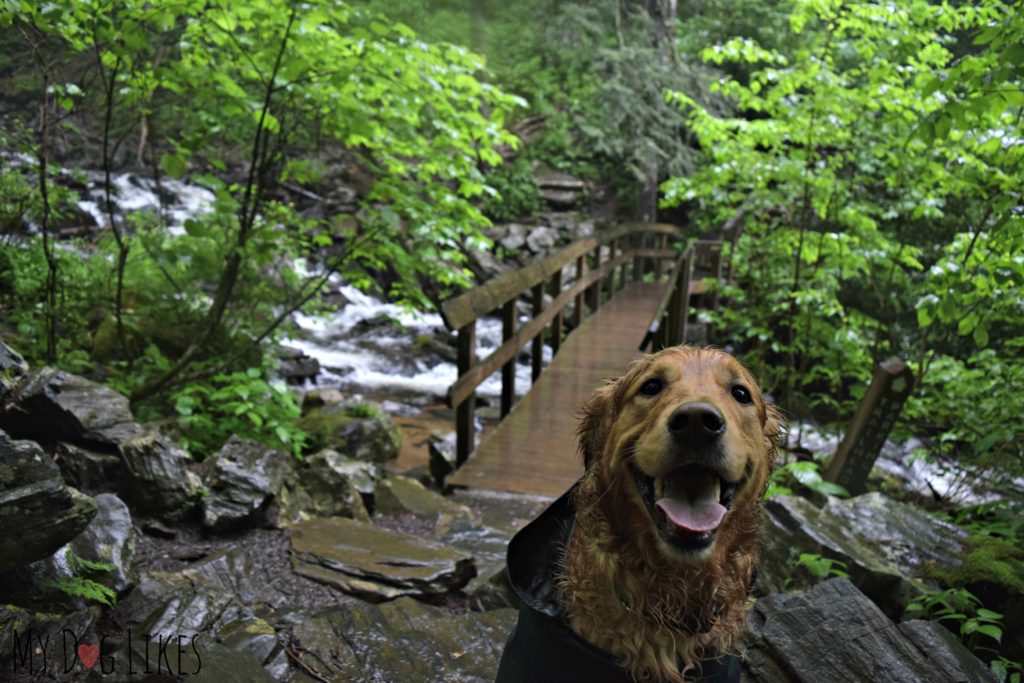 Just before reaching the low point on the trail you will start to hear the rush of the Falls which provides plenty of motivation to push through the last stretch.

Right at the base of Crabtree Falls is a walking bridge which gives you an amazing up close and personal experience with the Falls, which are just over 60 ft. in height and were flowing strong! 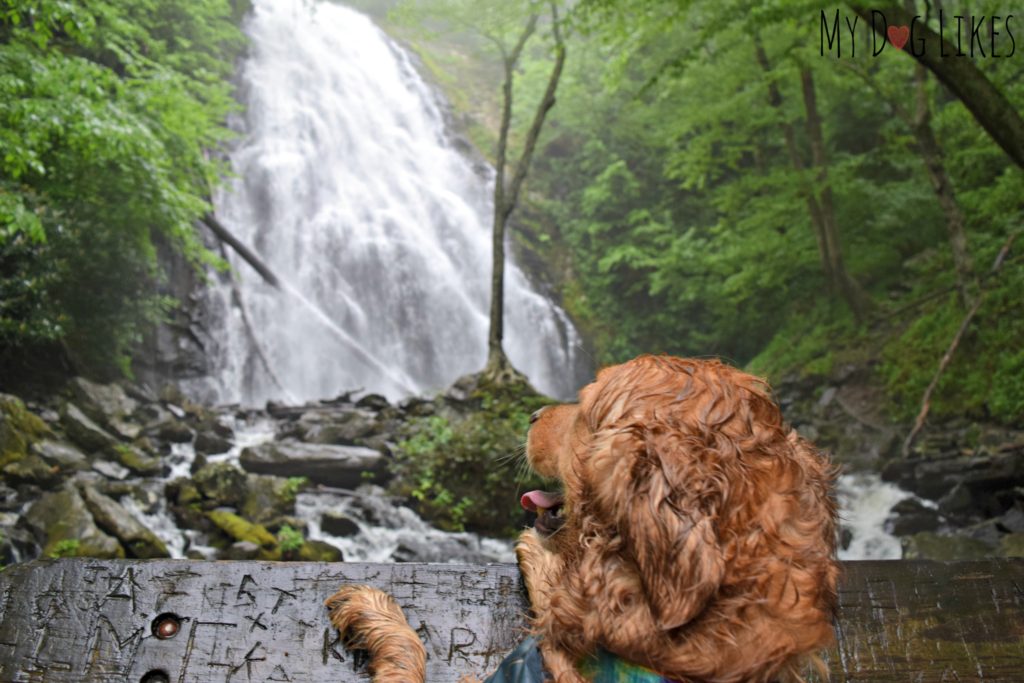 Charlie and I stayed here for about 10 minutes to admire the beauty and tranquility. The rain had kept everyone else away so we had the whole place to ourselves

We soaked up this serene moment together amongst the general hurriedness of our trip. We decided to head back up the same way we came although the trail does loop around after the Falls. It was shorter in distance to return this way and I knew Rach was already wondering where we were! 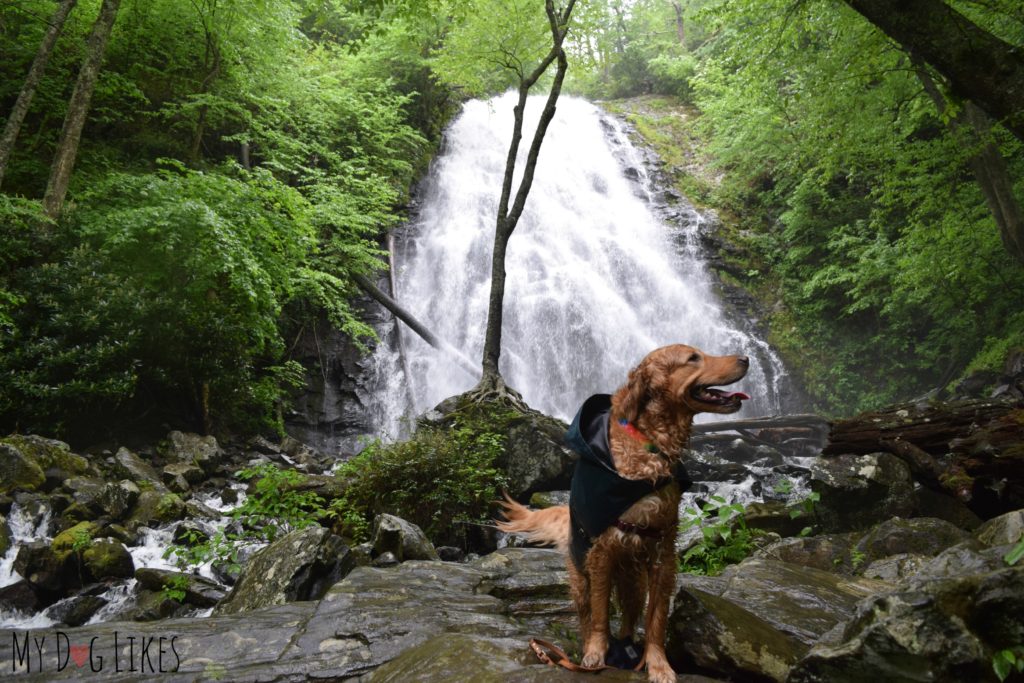 Overall, this trail took us about an hour – but we were flying! I would suggest planning for twice that time to really take it in and enjoy yourself.

Charlie and I returned to the car soaking wet, but rejuvenated by the experience we had just shared. Onward to the next stop!

Roughly 25 miles Northeast was the next stop on our list – Linville Falls. This landmark is operated by the National Park Service and from what I had read was a relatively mild hike to some gorgeous overlooks. 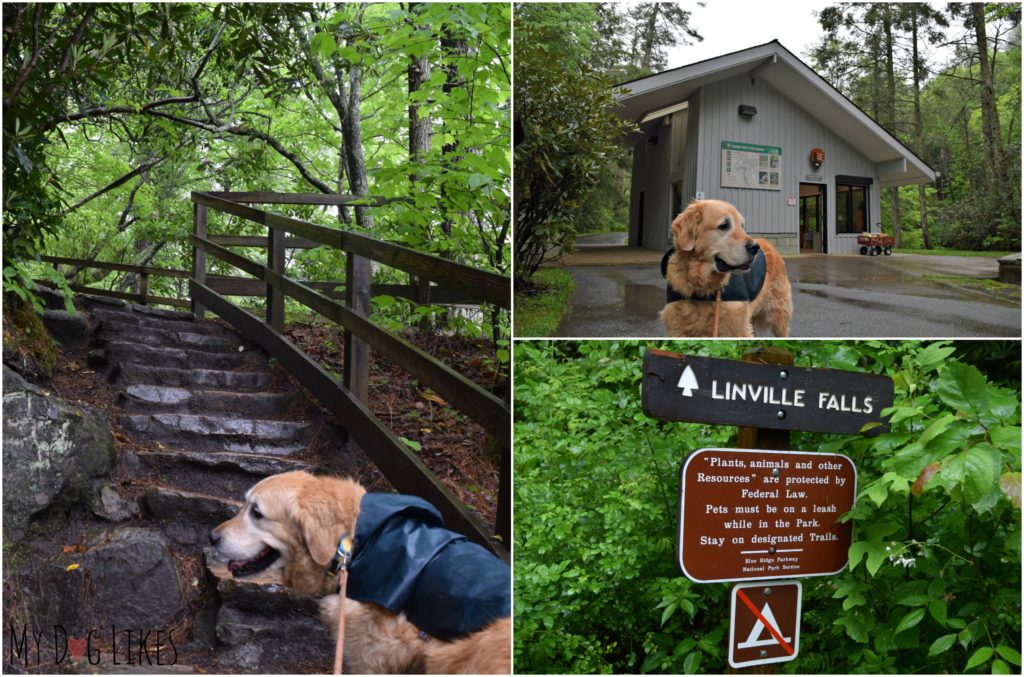 It was still raining when we arrived, though much less so, and I decided that this would be something that the old man could handle! Harley and I headed out this time leaving Rach, Charlie, and the baby in the car. 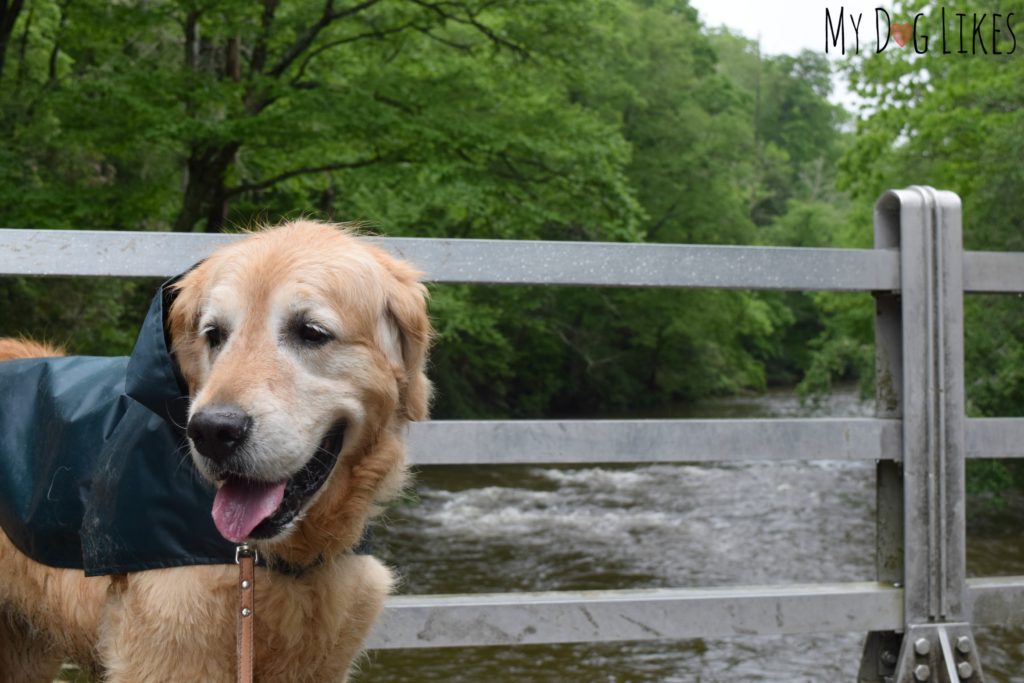 From the trail map near the parking lot I learned that the falls have 2 stages with 4 main overlooks – The first of which being only .5 miles away! Just the type of short hike we were looking for!

Immediately after leaving the visitors center we crossed over the Linville River, before followed a very well groomed trail to the Upper Falls Trail extension. This led down a narrow section of stairs onto a large rock outcropping with a view of the split upper falls (as seen in the photo below). On the opposite side of this observation area you can see the water whipping through a narrow gorge on its way to the big drop of the lower falls! 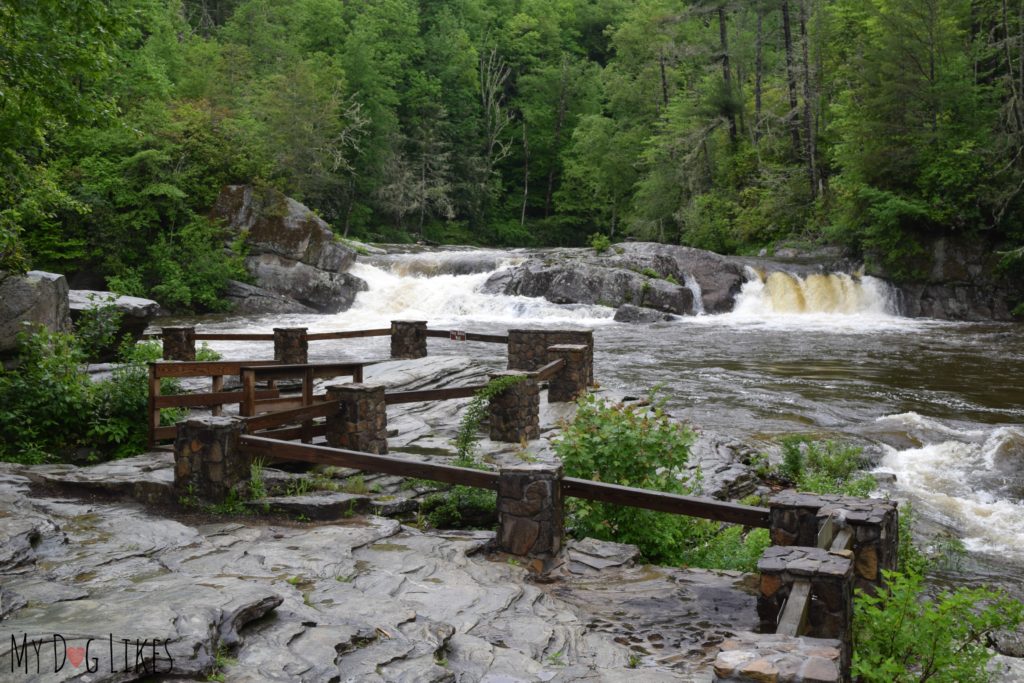 Since the rain had let up a bit, we decided to head up to the next overlook, known as the Chimney View which was located about .2 miles uphill. The views from here were incredible, as you could see the water rushing over the lower falls where you had just been and also wide panoramas of the gorge.

Harley and I admired this view for quite a while before deciding to make our way back to the parking lot. As we mentioned, there are 2 other overlooks further along the trail, but we were short on time and didn’t want to leave everyone waiting in the car for too long! 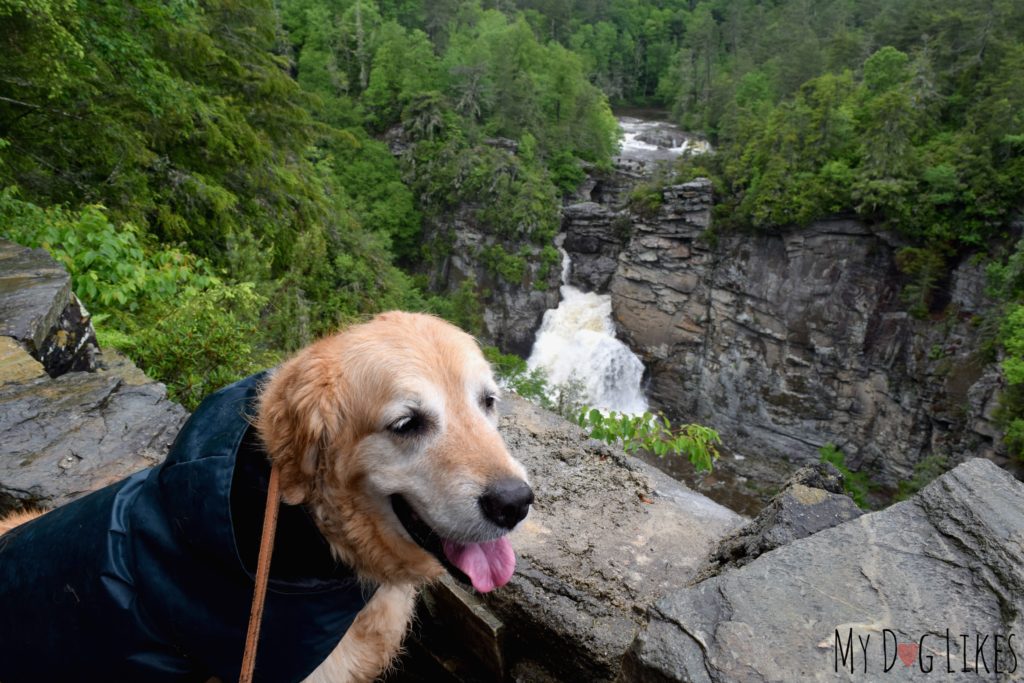 Linville Falls was breathtaking and is a must see if you are in the area!

We continued along the the Blue Ridge Parkway for about an hour after this hike, but the fog just kept getting worse and worse. We had hoped to drive up Grandfather Mountain (one of the largest mountains in the Eastern US) but when we arrived it was clear that we wouldn’t be able to see anything anyways, so saved the admission fee and continued along.

Shortly thereafter, we decided to cut our losses and take a faster route up to our hotel in Christiansburg which was still a couple of hours away. It had already been a long day and both me and the dogs were soaking wet!

Tomorrow we will explore the Christiansburg and Blacksburg area of Virginia!