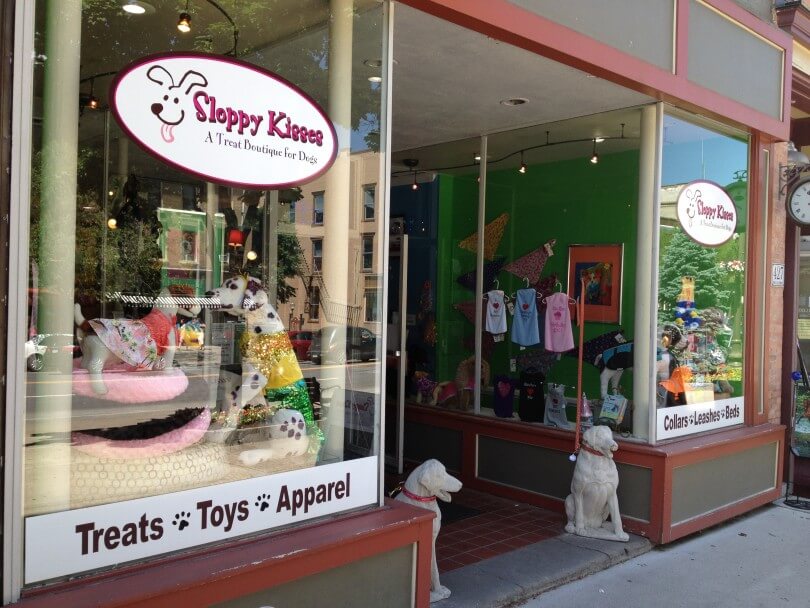 Recently, we spent a weekend away in Saratoga Springs, NY to attend a family wedding. Unfortunately for the pups, they didn’t make the final guest list and could not join us on the trip.  Instead, the poor boys were stuck for a few days with their two best (dog) friends… and we felt just awful for them 🙂

It wasn’t long after we arrived in Saratoga Springs that it became clear that the boys would have LOVED this town. We found ourselves constantly wishing they were exploring right alongside us (even after receiving a few naughty updates on their (Charlie’s) behavior!) 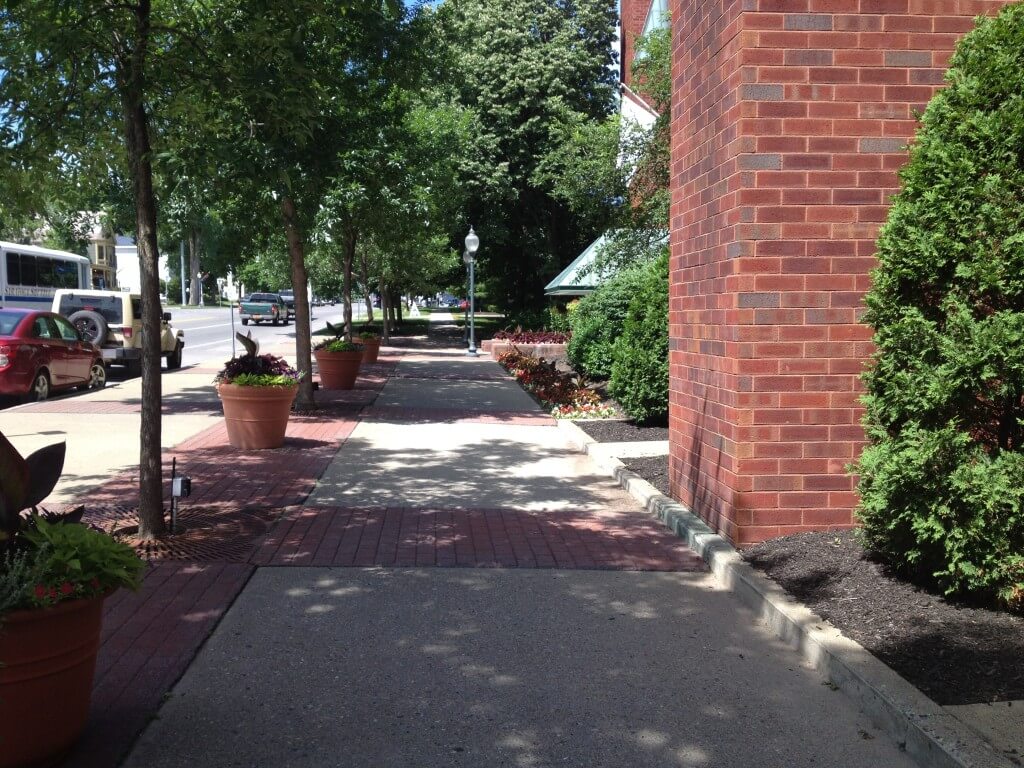 Saratoga Springs is a relatively small town north of Albany, NY.  The only thing we knew about Saratoga Springs prior to our visit was that it was best known for horse racing.

Wandering through Saratoga Springs however, it is tough not to think about dogs!  This is one of the most dog-centric towns that we have ever encountered. As any dog owner is well aware, not everywhere is welcoming to our canine friends, so Saratoga was a breath of fresh air!

Rach and I knew we had to share our experience, and thus a new feature at MyDogLikes was born:  Highlighting Dog Friendly Towns throughout the country!

With several hours to kill before the wedding, we seized the opportunity to explore and walked around downtown. The downtown area is centered around the shopping district on Broadway and boasts wide streets and sidewalks, dozens of shops, and plenty of cafe’s and restaurants. 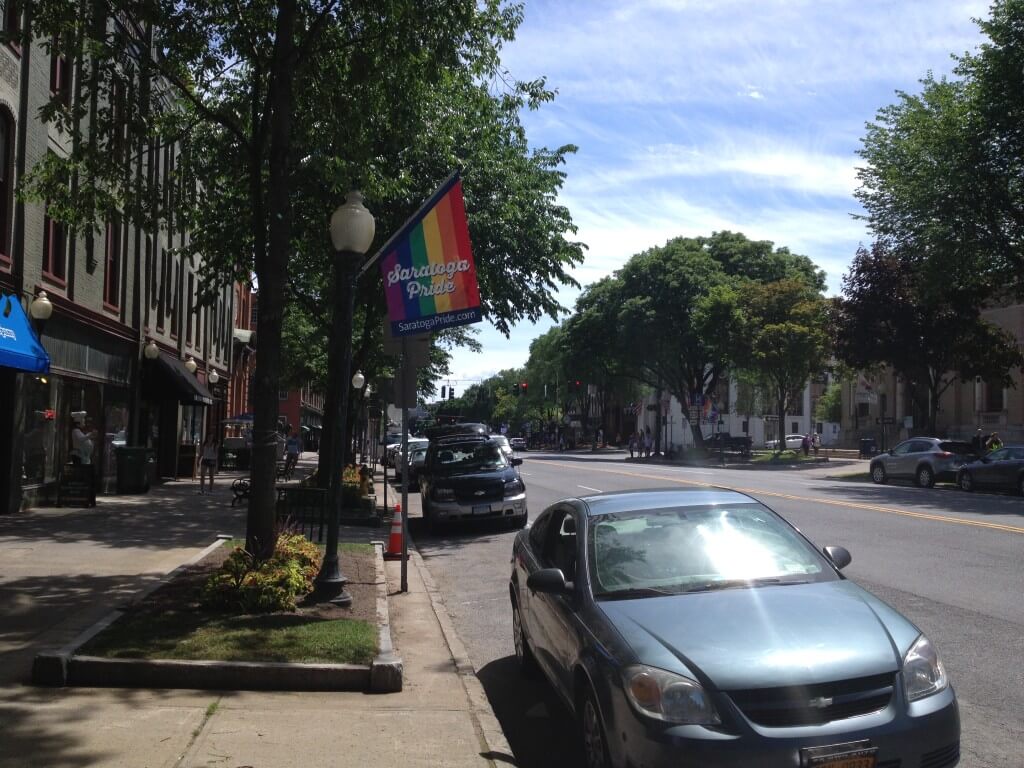 After grabbing a great cup of coffee at Uncommon Grounds, the first store to catch our eye was Mini Me Pups within the Saratoga Marketplace.  This was a beautiful boutique with all kinds of products that I had not seen before.  We ended up picking up a product called Leanlix (Click here for our full review) that serves as a low calorie reward, perfect for training.  You all know how  excited we get about new products, so we decided to purchase it and give it a try with our little monster in puppy school.  We also met the owner who was very friendly and helpful!

Walking the streets of Saratoga Springs, you will find plenty of dogs out for a stroll.  Dog bowls flank the front doors of many businesses and people dine alongside their best fur-friends at some of the local eateries.   On our walk we were lucky enough to see two gorgeous Bernese Mountain Dog puppies who were drawing an awful lot of attention!  I wish we would have snapped a picture!

As we approached the edge of town we stumbled across Congress Park.  A beautiful area with plenty of open space, walking paths, fountains and even a bit of water to splash around in.  The park was bustling on this beautiful day, full of people and other dogs to socialize with.  Congress Park is a great spot to stop for a picnic (which is what we did) or just to relax and let the dogs explore. 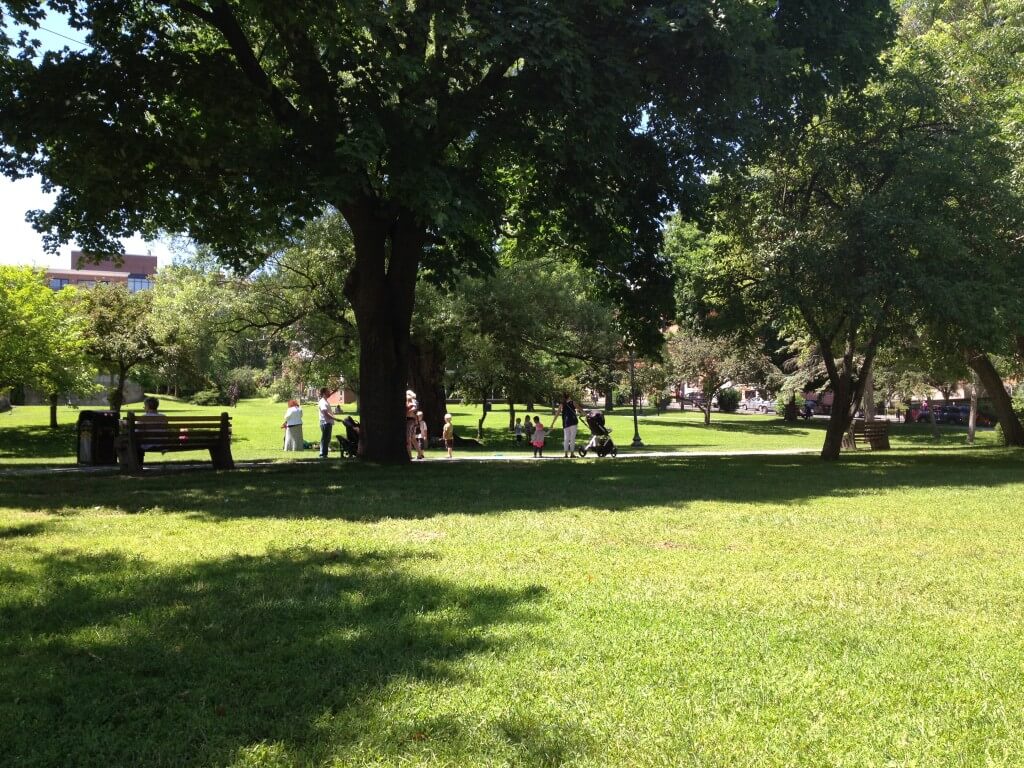 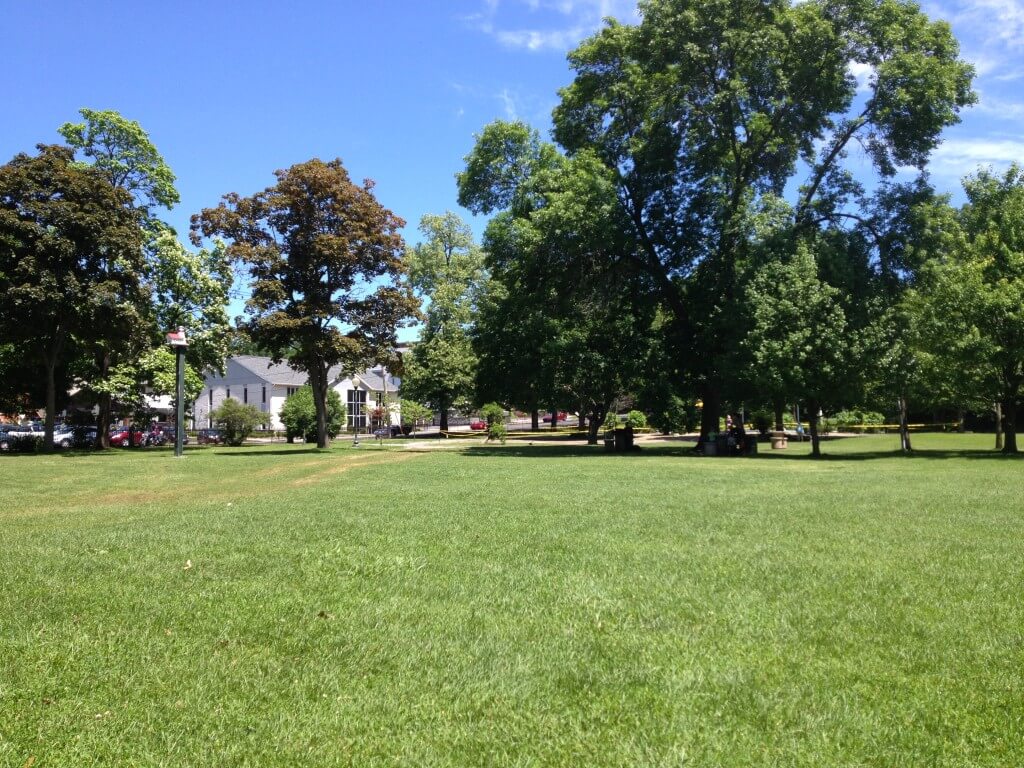 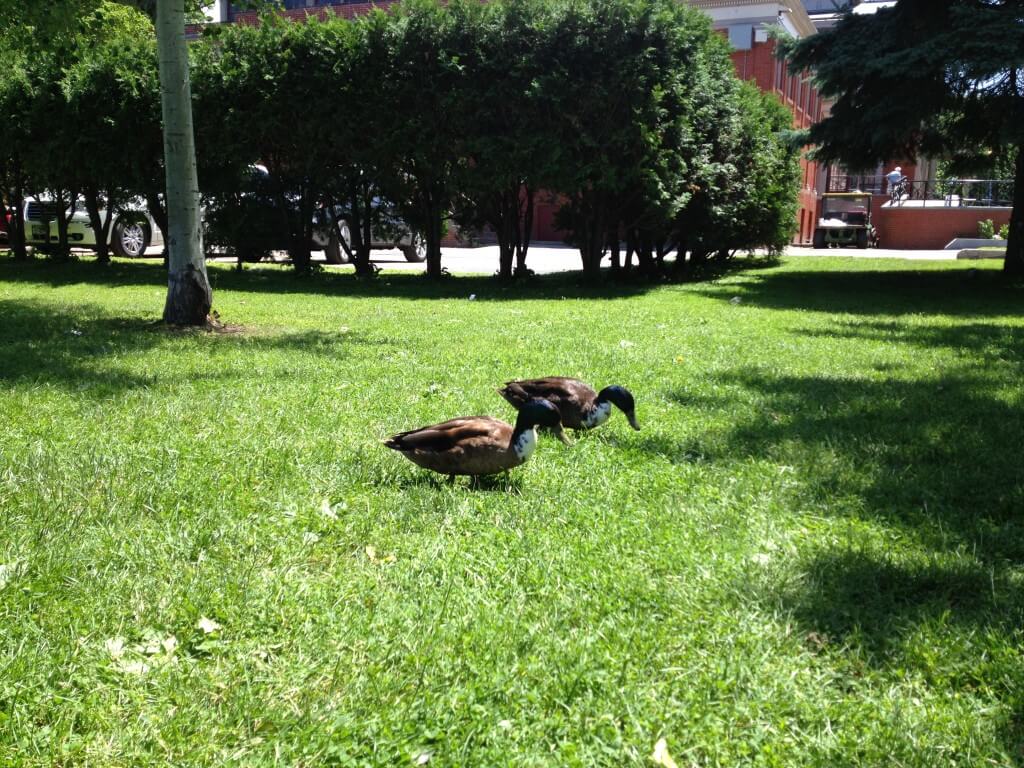 Plenty of ducks make their home in Congress Park!

After visiting the park we circled back up the opposite side of Broadway to check out the rest of the shops. 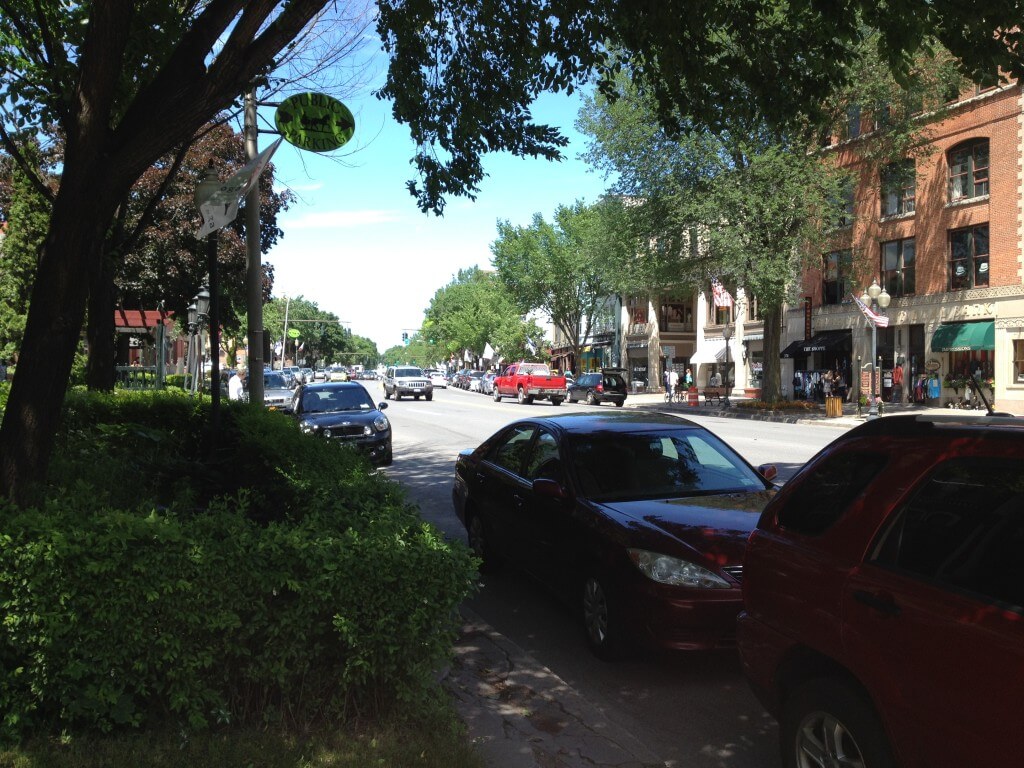 Next, we stopped in at Red Wolf where we were greeted with this wonderful sign! 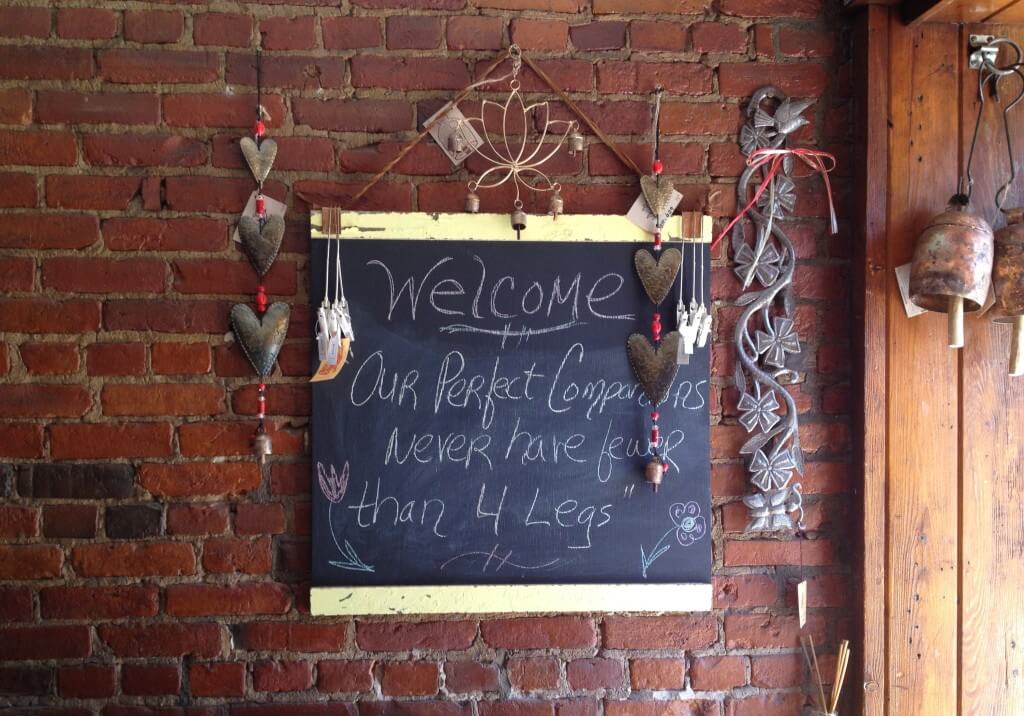 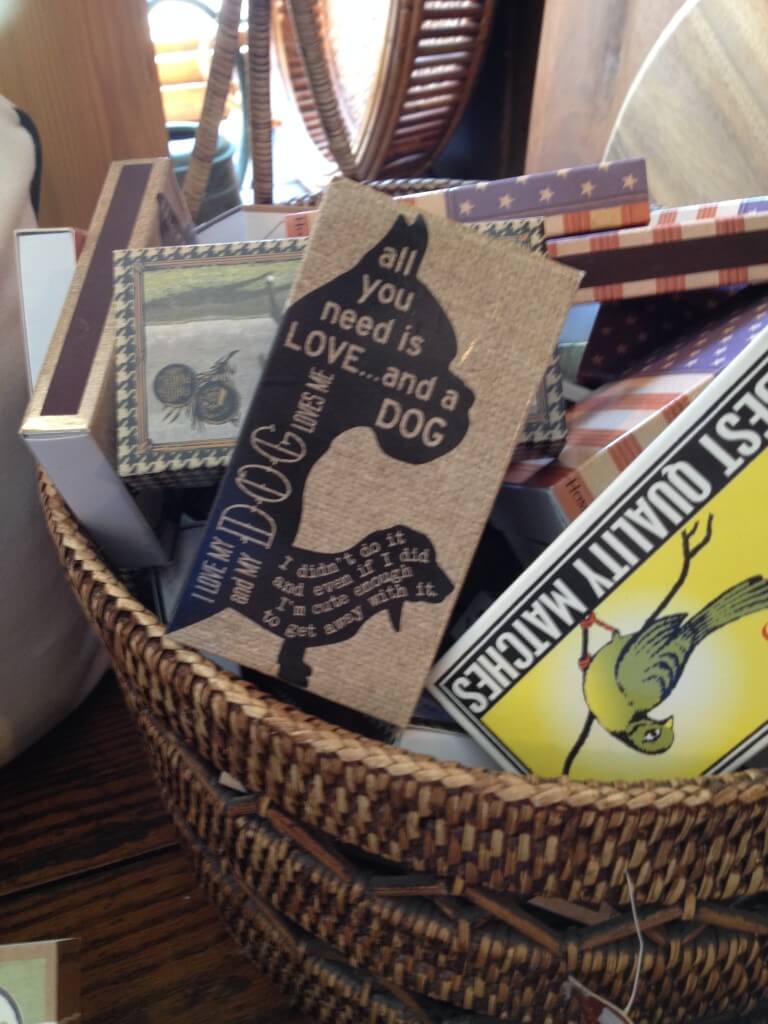 After that, we stopped in at Sloppy Kisses, a great dog bakery and boutique on the main drag.  It’s a shame that Harley and Charlie weren’t with us to sample some of their homemade treats!  (We would have brought some home had we had a better place to store them for the rest of the day). They had a great selection of toys and accessories as well. Knowing that Charlie’s wardrobe was seriously lacking, we picked up a new bandanna!! 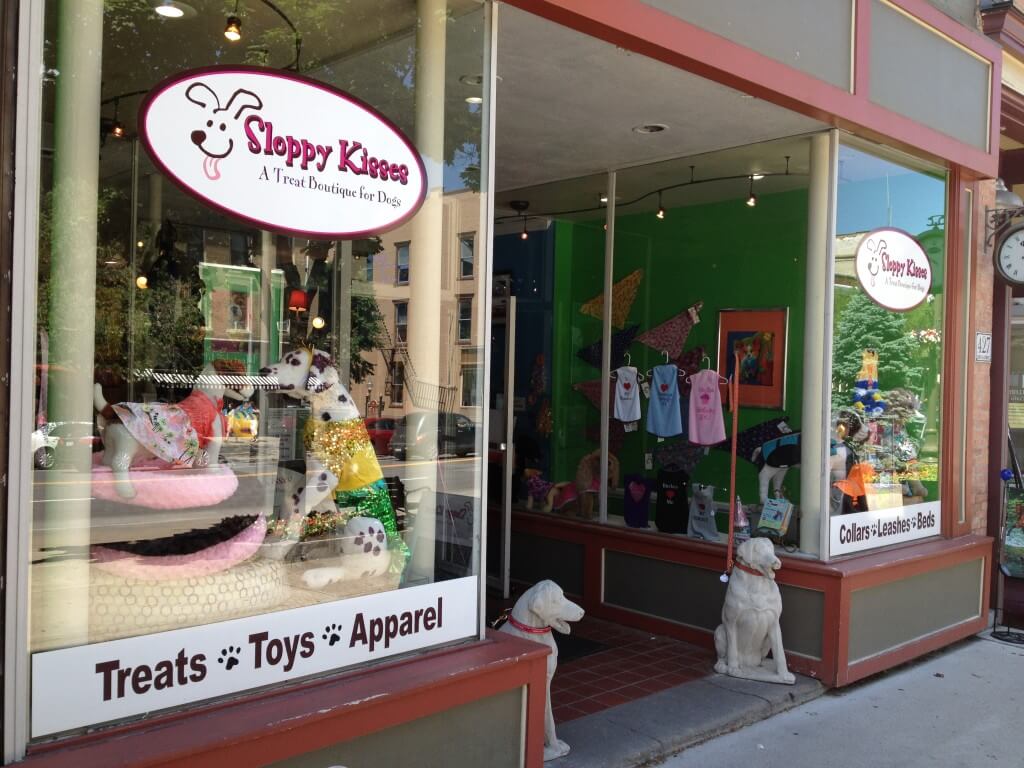 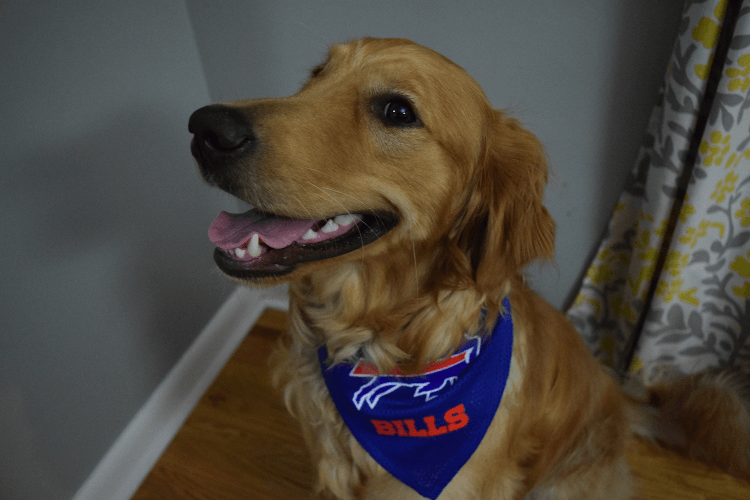 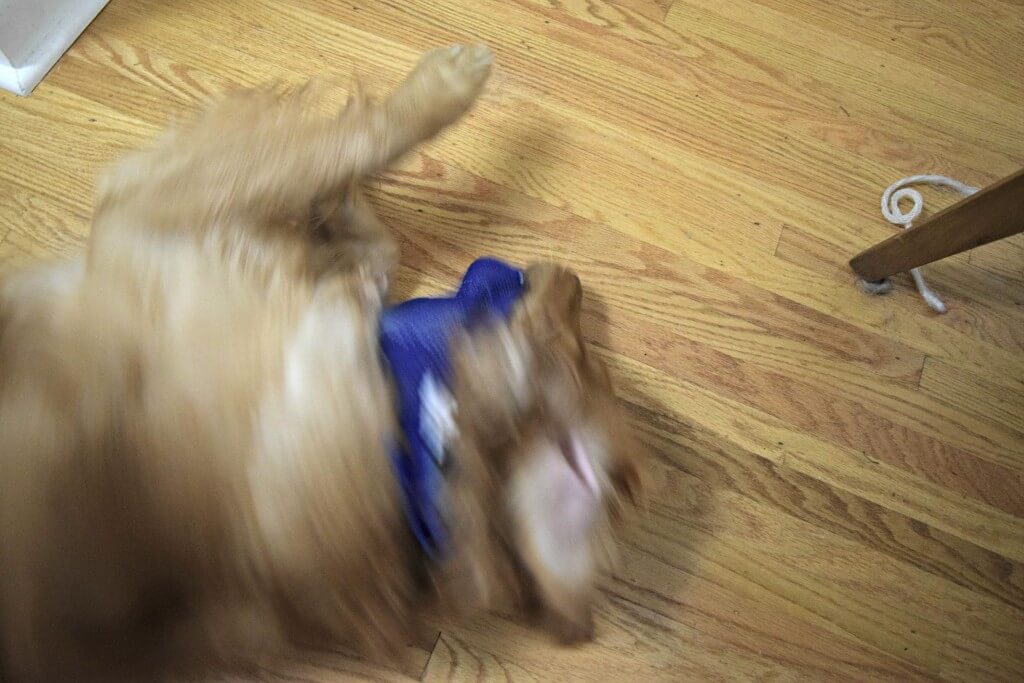 Not quite mature enough to keep it on, however…

The owners at Sloppy Kisses were extremely helpful and it was here that we found out about Saratoga’s Dog Friendly Downtown initiative. This program highlights all the dog friendly businesses within walking distance of downtown Saratoga Springs. 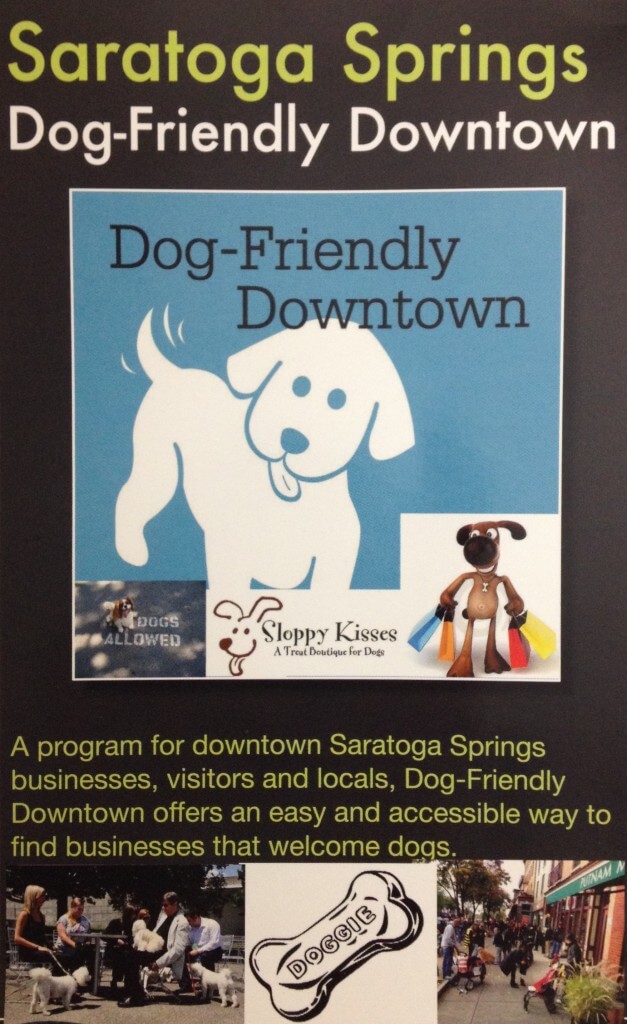 When walking around, be sure to keep your eyes open for the blue and white, tail-wagging dog logo (seen above) to know if a business is participating. Then, stop in and bring your pup too!  (We definitely checked out these shops more than any others!)  Check out the following flyer to see just how many businesses are participating! 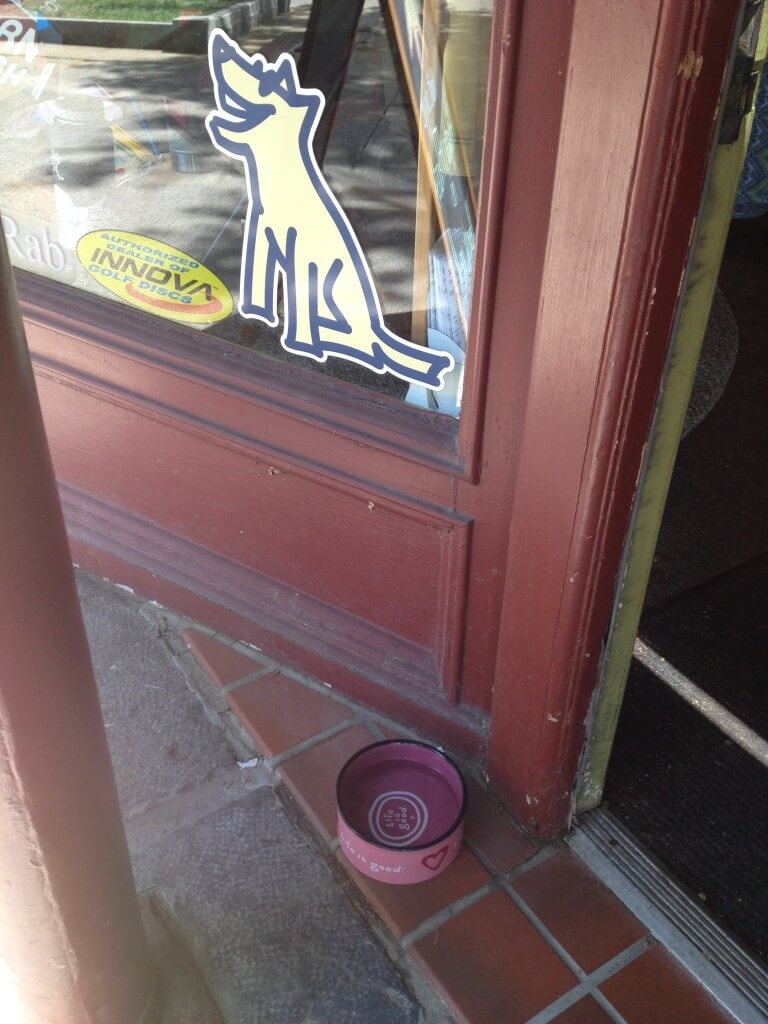 The water bowl above caught our eye and brought us into Mountainman Outdoor Supply Company where we found a great selection of high quality outdoor dog toys and equipment.  You will notice the Chuckit! Flying Squirrel in the rack that Charlie is now obsessed with! 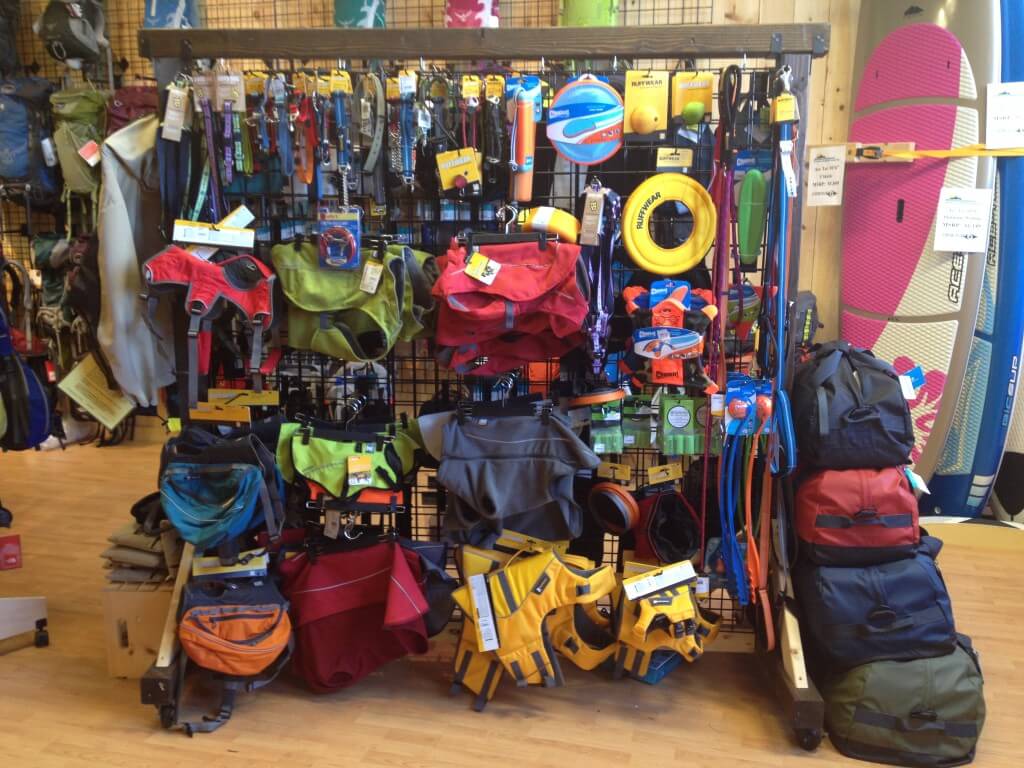 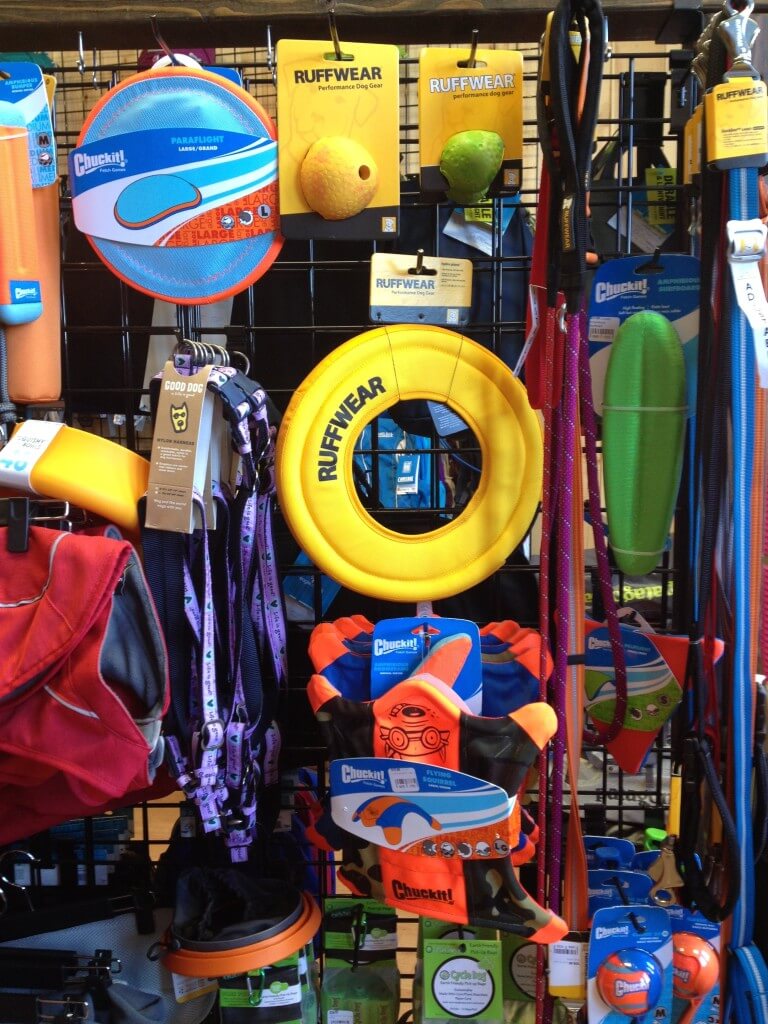 Saratoga Springs is a quaint town with a friendly vibe.  It exudes a dog-friendly atmosphere, which made us feel welcome right away.  There is plenty to do in town as well as in the surrounding area.  Although we didn’t have time to explore it, make sure to check out Saratoga Spa State Park.  This park has several nature walks, hot springs and even a geyser!  It would make for a perfect dog-friendly excursion just outside of town.  Saratoga Springs would be a great spot for a weekend away, and we plan to visit (with the dogs) in the near future!

Have you ever been to Saratoga Springs?

Let us know in the comments below!