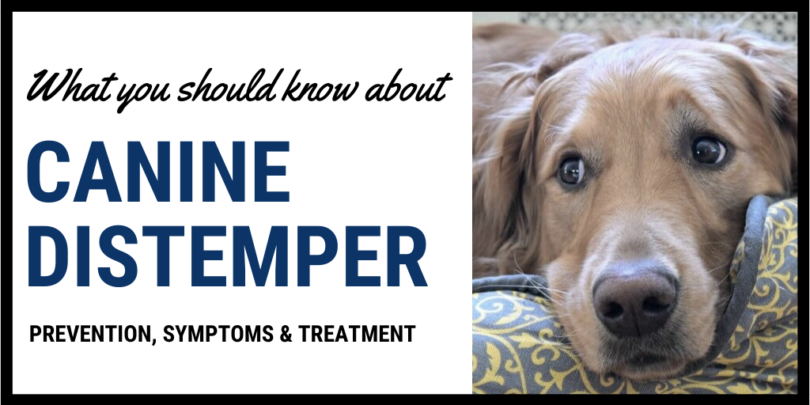 If you have a dog, you’ve at least heard the word “distemper” and know it’s a bad thing for your dog to have.  But what is it exactly?  How do dogs get distemper?  What can we do to prevent it?  How is it treated and is it curable?

What is Canine Distemper?

Canine distemper is a serious, highly contagious, viral illness with no known cure.  The virus attacks the respiratory, gastrointestinal, and nervous system.  The disease affects dogs, and certain species of wildlife, such as raccoons, wolves, foxes, mink, and skunks. The common house pet, the ferret, is also a carrier of this virus. Canine distemper is related to the human measles virus.

Young puppies and adolescent dogs who are unvaccinated, as well as non-immunized older dogs tend to be more susceptible to the disease.

What are the Symptoms of Canine Distemper?

Canine distemper initially attacks a dog’s tonsils and and replicates itself there for about one week. It then attacks the respiratory, urogenital, gastrointestinal, and nervous systems.

The dog will appear normal and healthy for several days after coming in contact with the virus.  They will then shows symptoms of sneezing, coughing and thick mucus coming from the eyes and nose. The dog will experience high fever (103.5 ° F, or 39.7° C), lethargy, and sudden vomiting.

Over the next couple of days the dog will develop diarrhea, depression and/or loss of appetite, usually leading to anorexia.

After about four weeks, the virus starts attacking the other systems of the dog’s body, particularly the nervous system. The brain and spinal cord are affected and the dog may start having fits, seizures, paralysis, and attacks of hysteria.  The seizures are often so violent that euthanasia is often the most humane thing to do.

In dogs or animals with weak immune systems, death may result two to five weeks after the initial infection.

What Should I Do if my Dog Shows Symptoms?

See a veterinarian immediately!  The virus spreads rapidly and must be aggressively treated as soon as it’s discovered.

How is Canine Distemper Diagnosed?

Diagnosis of this disease is done through biochemical tests and urine analysis.  X-rays may be necessary to determine if the dog has contracted pneumonia.

What Can I do to Prevent Canine Distemper?

The best thing to do is to have your dog properly immunized against this disease.  For a puppy, make sure he gets his first vaccination at six to eight weeks of age. Be sure to keep him away from any possibly infectious dogs or environments until he’s finished with his vaccinations at four or five months old.

Immunization is very effective and especially important if your dog is around other animals.

What is the Cure for Canine Distemper?

At this time, there is no cure for the actual virus that causes Canine Distemper. Treatment consists of controlling the spread of the virus and severity of secondary symptoms such as vomiting and diarrhea. Constant care is needed to make your dog as comfortable as possible.  Intravenous fluids may be given to prevent dehydration and antibiotics to ward off secondary infections while the infected dog builds up his immune response.

Some dogs are able to survive the infection, while for others canine distemper can be fatal.  Dogs who recover from canine distemper may have seizures or other central nervous system disorders that may not show up until many years later, sometimes in their old age. They may also be left with permanent brain and nerve damage, and these symptoms also may not show up until years later.

A Nova Scotia native, Jeanne moved to the United States 20+ years ago and is the founder of Animal Bliss. She is a dedicated lover of animals, always fighting for their rights and protection.